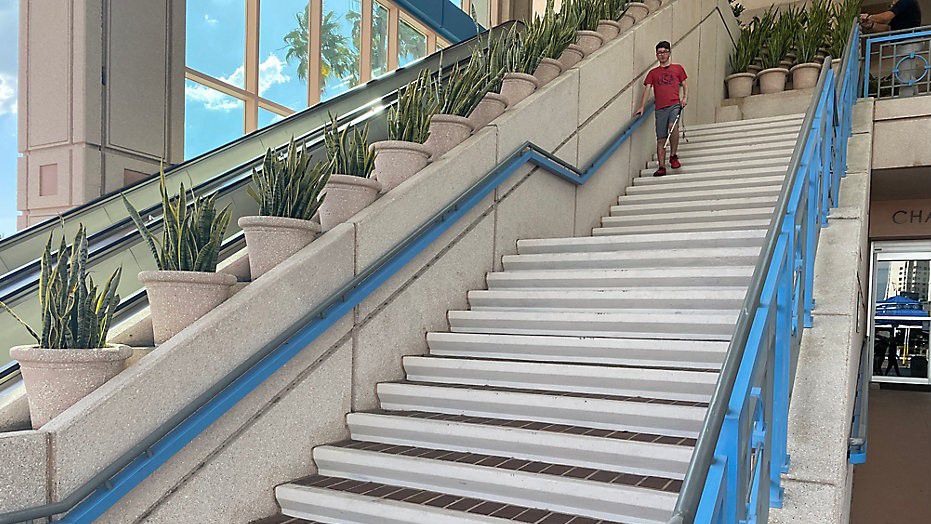 Gavin Smith is one of eight teenagers from Lighthouse for the Blind who will be taking part in the American Lung Association's Fight for Air Climb. (Spectrum Bay News 9/Melissa Eichman)

Sixteen-year-old Gavin Smith is one of eight teenagers from Lighthouse for the Blind who will be taking part in the American Lung Association's Fight for Air Climb.


Smith and the teens participating in the climb are all part of the Transition for Teens program at the Lighthouse for the Blind and Low Vision in Hillsborough County. The money the team raises in the American Lung Association's Fight for Air Climb will help in the fight to end lung disease and support the Lung Association's COVID-19 action initiative to protect against future respiratory virus pandemics.

The Armwood High School sophomore got juvenile arthritis as a baby and his vision was impaired by the time he was 2.

He said that everything he sees is blurry, but that isn't keeping him from taking part in the climb.

Inspiration and independence are exactly what Gaven gets from the Transition for Teens program at Lighthouse.

Students learn about teamwork, timeliness, they get gob training and are encouraged to contribute to their community.

"We feel like this is a great way for our organization, our students, to give back to the community, as well as have that expectation that they are members of society and perfectly capable of supporting the community and doing their part just like everybody else," said Glaser.

And just like every other teenager, Smith enjoys getting out.

"No matter if it's going out to eat or hanging out with my family or just getting some good exercise, you know?" he said.

He said the climb helps him do that. This 2022 climb will be his second time participating in the event.

As for goals for his future, Smith wants to attend the University of South Florida and study psychology.

In the meantime, he's concentrating on climbing while inspiring others and supporting others.

The 18th Annual Fight for Air Climb will take place Sunday, May 1 at Raymond James Stadium and will start at 8 a.m. Same-day registration will be available.