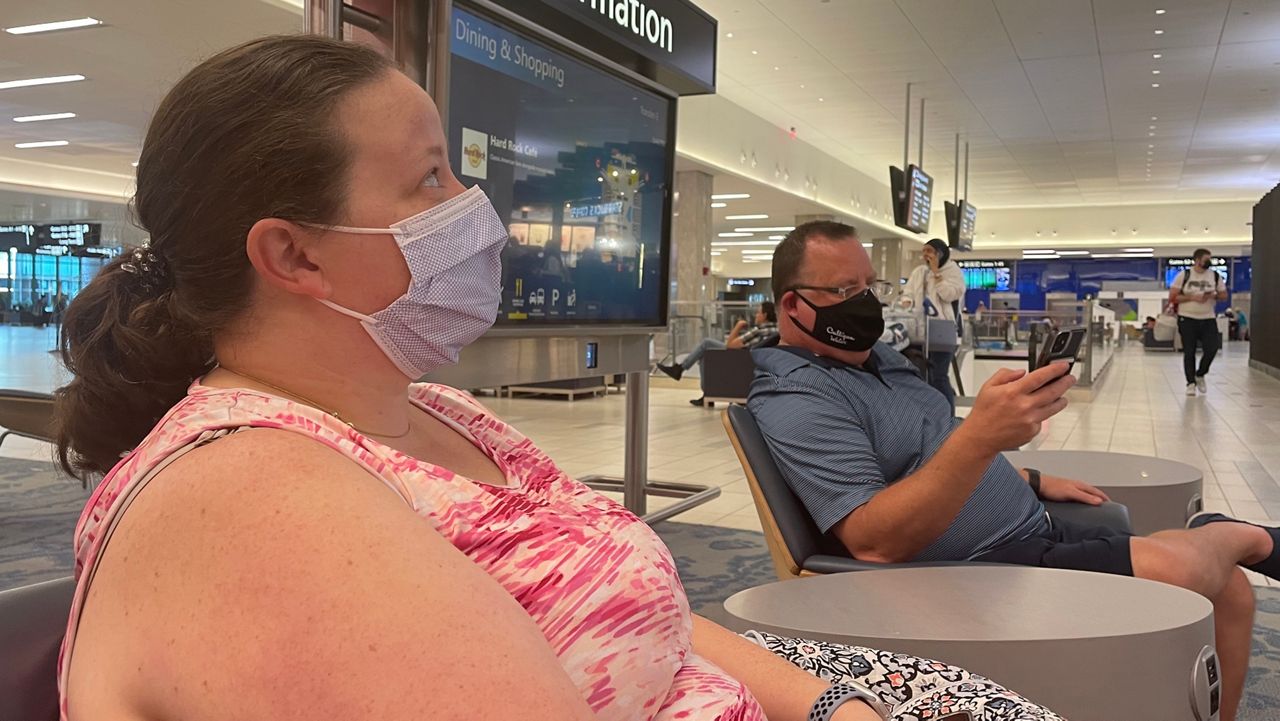 Cheryl and David Barger wore masks as they waited for their daughter’s flight to arrive at Tampa International Airport on April 18, 2022. (Spectrum News/Sarah Blazonis)

TAMPA, Fla. – Tampa International Airport said Monday night masks will now be optional in all of its terminals and facilities. The move comes after a federal judge vacated a mask mandate from the Centers for Disease Control and Prevention that required masks be worn on public transportation and in transportation hubs.

"Basically said it's null and void. It shouldn't have been made in the first place. The CDC never really had the authority to do it," said Dr. Jay Wolfson, a professor of law at Stetson University College of Law. "There's a lot of good legal reasoning behind this."

"This particular document that was put forth by the middle district reminds me very much of Justice Scalia and the way he wrote," Wolfson said, referring to former U.S. Supreme Court Justice Antonin Scalia. "It's very detailed. It's very elegant. It's probably longer than most decisions would have to be, but it draws on every possible corner of an argument against the CDC's authority for making this kind of a rule."

Wolfson said that includes the judge's finding that the CDC violated the Administrative Procedure Act by not allowing public participation through the APA's notice and comment procedures.

"As a basis for dispensing with the ordinary APA requirements, the CDC found that 'it would be impracticable and contrary to the public's health' to delay the mandate to seek public comment," the decision reads.

"The legal side of this is that the agency should have done something different. It had plenty of time to do it, and it didn't, and that was a mistake. It was a policy mistake from a public health and a medical perspective," Wolfson said.

Wolfson is also a professor of public health, medicine, and pharmacy at the University of South Florida. He said when it comes to health, the bottom line moving forward will be personal responsibility and common sense. He said if someone is at high risk for a severe case of COVID-19 or is ill, they need to weigh that when deciding whether to mask up while traveling.

"We've come a long way. This is not March or December 2020 or July of 2021. We're in a different place right now. We have to recognize that," Wolfson said.

That's what Cheryl Barger, of Wesley Chapel, said she planned to do. Barger and her husband, David, were at the Tampa airport early Monday evening awaiting the arrival of their daughter's flight from Spain. They were there just a couple of hours after the judge's ruling was announced. Signs still reminded visitors to wear masks, and most did.

"I don't mind the mask mandate being enforced in very close, confined spaces only because...I recently am recovering from it myself," Barger said, referring to a recent case of COVID-19.

When asked what she would do if masks weren't required, Barger said, "I wouldn't wear it in the airport itself. Getting in the plane, I probably would be more apt to putting it on."

David Barger said he was ready to see masks go.

Chad Lapage, of Sarasota, was also waiting on an arrival. He said he questioned how effective masks are and said he wouldn't feel unsafe if the mandate was removed.

"I haven't worn a mask in, like, three months," Lapage said. "I came to the airport and didn't even have one. I totally even forgot all about it. I walked in, I saw everybody in a mask, I'm like, 'Oh, I guess I better go find one.'"

Wolfson said there will likely be an appeal process. He said he expects this ruling will be upheld.