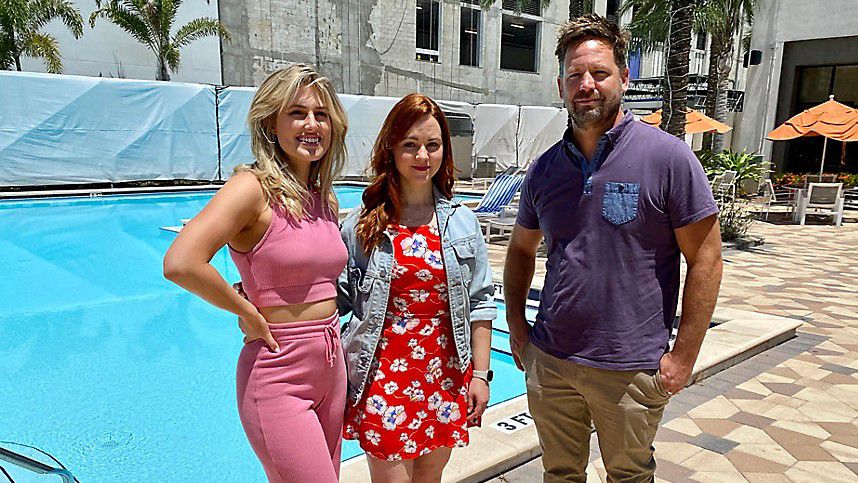 Actors Cameron Kelly (left) and Chelsea Alden, along with producer Corey Moss, are in town this weekend to celebrated their movie, "Rosé All Day," which is being screened during St. Petersburg's Sunscreen File Festival. (Spectrum Bay News 9/Josh Rojas)

Sunscreen Film Festival kicks off with movie 'Rosé All Day'

"This is such a break from L.A., so far, it's just been lovely," said Kelly. "I can't wait to meet more locals — I actually just hired a local makeup artist to do my makeup for the festival."

According to Film Commissioner Tony Armer, the festival has a yearly economic impact of $500,000 on the area and has brought 13 movies to be filmed in Pinellas County, which cost more than $3 million to produce.

As one of the festival founders, Armer said he expects 5,000 attendees to screen more than 180 films over the weekend.

Moss said he booked more than a dozen hotel rooms for his cast and crew in downtown St. Pete for four nights.

The premise of "Rosé All Day" centers on a group of college friends who meet once a year for a pool party. After seven years, cracks in their relationships become all-consuming sinkholes filled with vomit, tears and confessions.

"It really is a movie about friendship and this power of friendship," said Moss. "Also, a lot of drinking rosé."

Alden said she plays the host of the annual party and offers her own take on the movie.

"As time has gone by, how do these friendships change?" she said. "How does drinking a lot of rosé all day enter into telling your friends things you do or don't want to tell them?"

Kelly said she plays the most disgruntled friend in the group who has veered away from the person she was in college.

"Everybody's drinking a lot of rosé during this film and truths are revealed," she said. "Ultimately, I think it's a tale that everyone can relate too."​

Both Kelly and Alden said this was their first visit to St. Petersburg.

"I'm here the whole trip. all the way through Sunday," said Alden. "I'm really excited to sort of see the city and I think Cam and I will probably walk around tomorrow and scope it out."

Alden said she was impressed to find out that Pinellas is the only county in Florida that offers a film incentive. The program offers up to 20% back on expenses.

"Maybe even shoot something here," she said. "I hear there's a lot of good film incentives. Hopefully next year, once we wrap editing, I'll be back again with my film."

Alden just finished her directorial debut of a short film called "Next." The Sunshine Screen Festival offers awards to films and "Rosé All Day" got a few nominations.

"Rosé All Day" is expected to be released on a streaming platform this summer.

The festival runs from Thursday through Sunday at the Sundial AMC 12 Theaters in St. Petersburg. Tickets are still available on the festival's website.