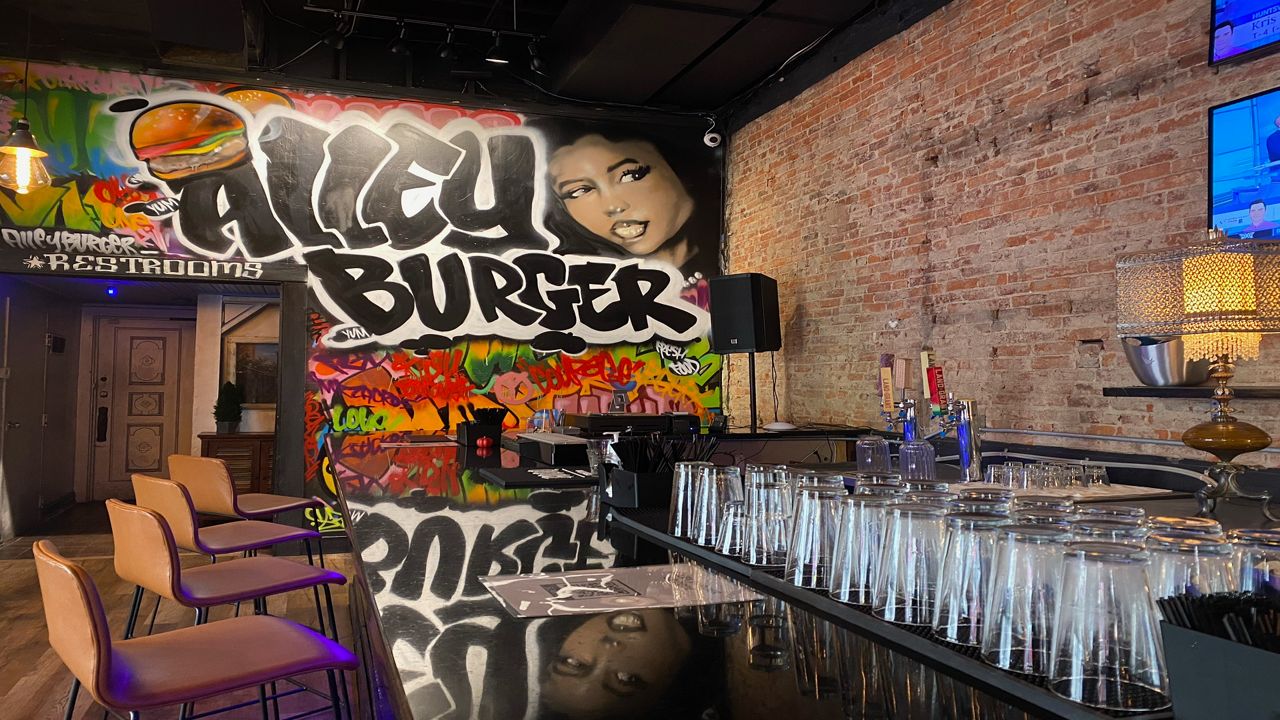 COLUMBUS, Ohio — Alley Burger grills its burgers with a mix of culture, history and creativity.

The “alley” in Alley Burger is in what became known during the 2020 protests as “Justice Alley.” It’s home to murals, paintings and graffiti.

Michael Onyejekwe, owner of Alley Burger, was born and raised in Columbus and has seen this alley be home to many things, but during the protests, he saw it become a make-shift art gallery.

When he realized he wanted to start his own restaurant in Aug. 2021, he wanted to draw inspiration from the art.

“It was definitely an influence and kind of a guiding light towards what we wanted to bring and so we just added to it and took from it,” said Onyejekwe.

When patrons walk into the burger joint, they’re met with vibrant colors and customer service. Although the alley has been home to many establishments, Alley Burger has already made a name for itself since it opened in February.

Customers have raved about the burgers that are the culmination of various flavors. Its BBQ burger stands almost a foot high, and its Greek burger gives customers an international experience.

While flavors might draw inspiration from all over the world, Onyejekwe said the place still feels like home. He named all the signature fries after various alleys in Columbus, except for the one named after his daughter.

While business has been booming, Onyejekwe has struggled to find employees to keep up with the demand. According to the Bureau of Labor Statistics, 38 million people quit their jobs in 2021, for reasons ranging from child care constraints to ongoing weariness of COVID-19.

“Filling the place with people who want to work hard and stick around for a career is very hard,” said Onyejekwe. “I mean, we’re not the only business. There are many businesses that are going through it. It’s hard to find employees.”

Onyejekwe is nothing without his staff. He has filled about 80% of the positions. When patrons walk in, they’re greeted by the host staff and the bartender.

Jelisa Hicks is originally from Brooklyn, New York. She moved to Ohio about a year ago, and Alley Burger has become her second home. While a bartender wears many hats, Hicks said she looks forward to seeing her regulars and creating new ones.

“A lot of the locals come in and tell us what it was outside of the go-go club, the other restaurants it was, it was previously a bar and someone told me it was a speakeasy back in the day so you definitely get a lot of history of this alley,” said Hicks.

While she keeps the party in the front, all the magic happens in the back. Anthony Watson is the executive chef and was also born and raised in Columbus. He has a personal connection to all the menu items, and every order is made with a sense of love and a sense of home.

“To see people come in here and order my recipes and dishes and they’re coming in the hundreds means everything,” said Watson.

Alley Burger has attracted people from all over central Ohio with its food and neo-soul vibe. Onyejekwe said he’s excited to offer a new culture to Columbus.

“We’re kind of like a child of the community,” said Onyejekwe. “We’re really fighting to bring downtown back to life.”

Alley Burger is at 26 N. High St. Rear in downtown Columbus. It is open every day and is on all major food delivery apps.