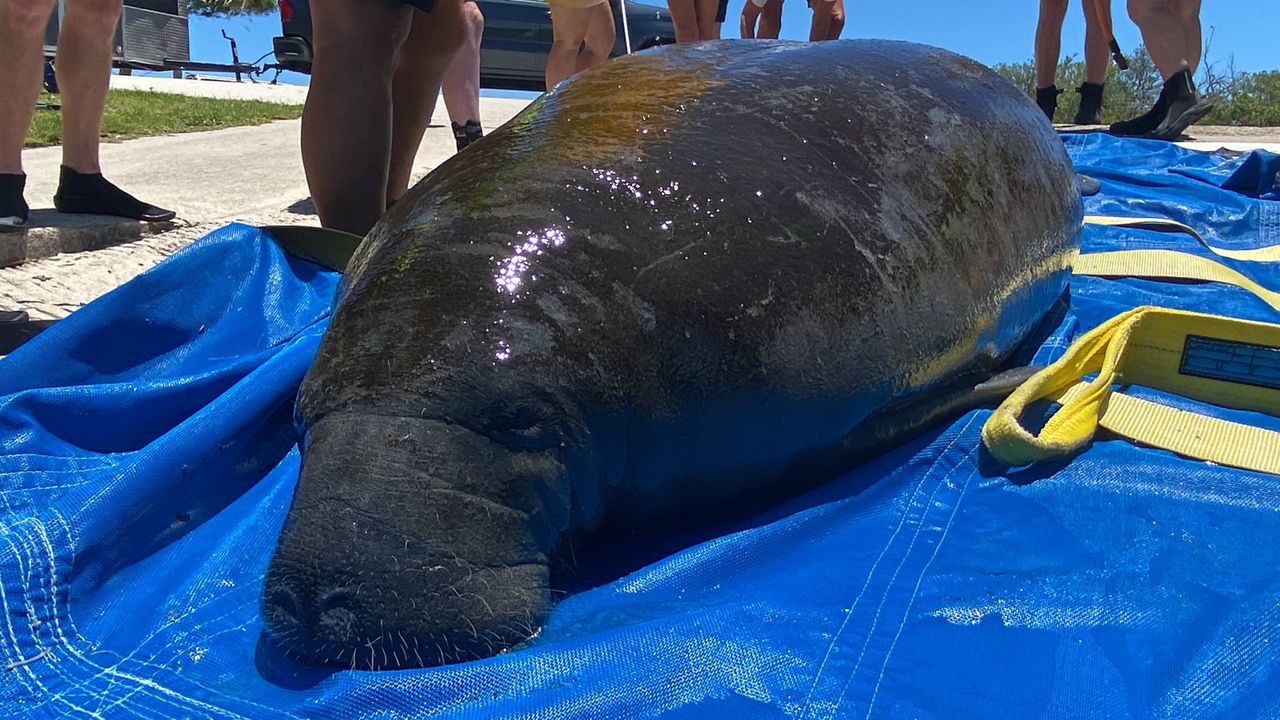 Jolo the manatee prepares to be released back into the wild at Round Island Beach Park in Vero Beach on June 2, 2022. (Spectrum News/Will Robinson-Smith)

BREVARD COUNTY, Fla. — After more than a decade of petitioning, the U.S. Fish and Wildlife Service has legally agreed to make a notable change concerning manatees.

A seven-page settlement agreement related to a lawsuit by the Save the Manatee Club and others issued Wednesday states that by Sept. 12, 2024, FWS needs to submit “a proposed revision of the critical habitat for the Florida manatee.”


The federal agency first charted the waterways that were considered “important concentration areas for manatees” back in 1976, and that definition of their “critical habitat” hasn’t been updated.

After the deaths of more than 1,600 manatees since Jan. 1, 2021, in what’s come to be known as the “Unusual Mortality Event,” FWS has now agreed to start working on the change.

“Their position is it wasn’t done because they didn’t have the staffing and the resources. We’re saying that’s not an excuse anymore,” said Patrick Rose, the executive director of Save the Manatee Club. “And we’re also asking them to be given additional staff and funding because these are the kinds of serious collapses within ecosystems can happen when they don’t keep up with the recovery efforts that are necessary.”

Save the Manatee Club is one of three plaintiffs in the now-settled lawsuit with FWS. Other plaintiffs included the Center for Biological Diversity and Defenders of Wildlife.

Rose noted that the plaintiffs in the case first filed their petition in 2008, and it was studied by FWS over the next year or so. According to court documents, the agency found that "revisions to critical habitat for the Florida manatee are warranted,” but added that "sufficient funds are not available due to higher-priority actions such as court-ordered listing-related actions and judicially approved settlement agreements."

Rose said losing more than a decade between the original ask and the decision by FWS to now act on the critical habitat, has been “devastating.” He argued that these updates are needed to reflect how much Florida has grown and changed as a state.

“We’re having new marina developments, and we’re having other developments that are going to impact manatees even more,” Rose said. “The majority of manatees have been hit and scarred by boats — we’ve had record-breaking watercraft mortality.”

As of June 2022, of the 562 manatee deaths recorded so far, 31 deaths have been directly linked to boat or watercraft strikes, according to the numbers published by the Florida Fish and Wildlife Conservation Commission.

In 2021, 1,101 manatees were reported dead, with 103 of those deaths being attributed to watercraft strikes.

“And so, when we combine the issues like red tide, the algal blooms, watercraft mortality and now we’re facing a future issue that’s really going to be serious with climate change, and we could be looking at the loss of their warm water habitat on top of that,” Rose said. “There’s so many different things that are going to be necessary to be managed concurrently.”

As FWS begins work on the critical habitat redefinition, many organizations are still doing what they can to help as many manatees get back to a healthy state as possible.

On Thursday, multiple organizations helped in the release of Jolo, a manatee found in rough condition last winter in Indian River County.

This release comes as the @USFWS came to legal agreement with @savethemanatee and others to revise the definition of “critical habitat” for the manatees by Sept. 2024.

That hasn’t been revised in more than 40 years. pic.twitter.com/5RtSKVVNRr

“She was very thin, she was anemic and she was dealing with an overwhelming parasite infection in her nasal passages that was preventing her from being able to breathe comfortably,” said Dr. Natalie Hall, a veterinarian at Disney’s Animal Kingdom.

Hall, who has worked with Disney for nearly 10 years and is a board-certified specialist in zoo medicine with training in aquatic species, is part of a collective of groups that helped care for Jolo. The manatee was brought to Disney after it had gone through some initial treatment at SeaWorld’s Manatee Rehabilitation Center.

This past winter was the second time Jolo had been witnessed experiencing similar types of issues. Hall said she is confident that Jolo’s new venture back to the wild will be more successful this time.

“I’m really excited for her because she’s so healthy today,” Hall said. “She’s really fit and ready to back out into the wild.”

Jolo’s return to the wild was not only a victory for the rehabilitation process, but also an opportunity for researchers to gain valuable information.

Susan Butler, a biologist with the U.S. Geological Survey, was on hand before the release to attach a GPS tracking device around Jolo’s tail.

“It’s a joint project between the U.S. Geological Survey, Florida Fish and Wildlife Conservation Commission and Clearwater Marine Aquarium Research Institute,” Butler said. “We collectively pooled our resources to try to follow some of these rehabilitated manatees that have come in due to the Unusual Mortality Event that’s going on on the Atlantic Coast.”

Jolo is the sixth manatee that this collective is tracking. She will help researchers learn more precisely where manatees are going to find food and where fresh water is located.

“We decided we wanted to put these tracking devices on to see how they would use the resources, where they would find resources, first off — due to the die-off of seagrasses, it was very important to us" Butler said. "And to monitor their health after going through the rehabilitation process.”

The trackers last for about seven to eight months before the batteries need to be replaced — which also allows a chance for experts to assess the manatee’s health at that point.

Now that the settlement between FWS and the plaintiffs has been reached, the agency will begin work to re-designate the Florida manatee critical habitat. Rose said he is hopeful that Congress will allocate more money for the agency to increase staff and resources to accomplish that in a timely manner.

The Save the Manatee Club and others are still in litigation with the Environmental Protection Agency (EPA) to try to force it to improve water quality standards, especially in areas that impact the health of the manatees and other marine life.

“The Fish and Wildlife Service already asked EPA to reinstate formal consultation under the Clean Water Act and the Endangered Species Act,” Rose said. “And so, we can go there together as partners in our suit with the EPA, even though they’re not a formal part of it.

“Being on the same page, arm and arm, we believe that it will help to inspire, if you will, EPA to do the right thing and to reestablish stronger standards to protect the aquatic ecosystem.”

While the legal battle continues, groups like FWC also are educating the public about the role played by all those who enjoy the Indian River Lagoon and other key waterways.

“If you’re on the water, please keep an eye out for manatees,” said Amber Howell, a research associate with FWC. “Look for the swirl, which is a footprint behind where the manatees are. Wear polarized sunglasses so that you can see them easier. And make sure to abide by those manatee zones.”

Howell added that one of the best ways to help is to keep an eye out for injured, stressed or deceased manatees and report them to FWC by calling 1-888-404-3922.