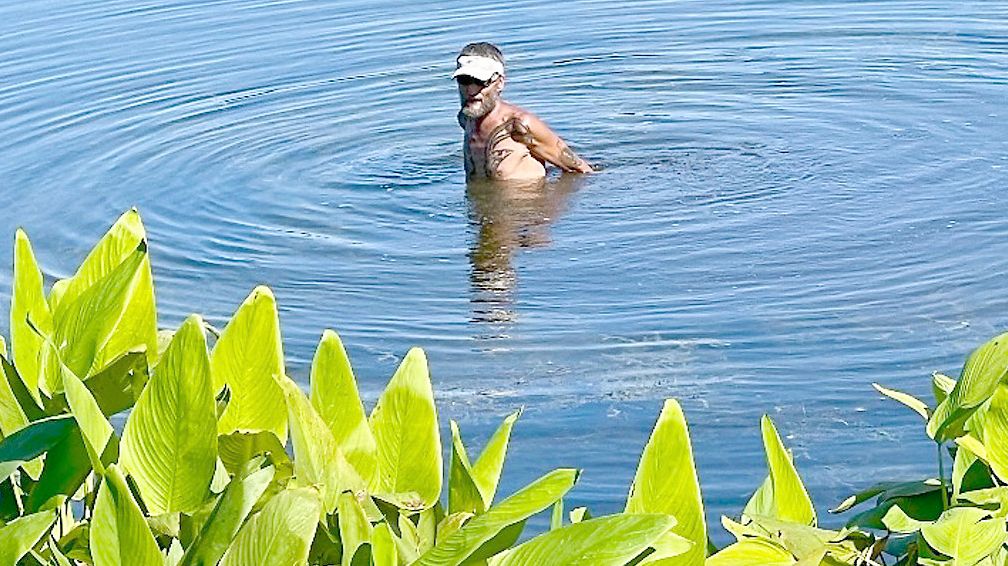 Sean McGuinness, 47, retrieves discs lost in Taylor Lake from the nearby disc golf course in mid-March. He was found dead in the alligator-infested lake on May 31. (Photo courtesy of Derek Erskin)

LARGO, Fla. – The body of Sean McGuinness, 47, was missing three limbs when he was found in an alligator-infested lake on May 31, according to Largo Police.

"When Sean McGuinness was recovered last week, he was ​observed to be missing three limbs," said Largo Police Department spokeswoman Megan Santo. "​The sergeant expect​s the final report from the Medical Examiner​ to be released approximately two months ​after the incident date."

Taylor Lake is located next to a popular disc golf course and police believe McGuinness was in the water retrieving lost discs at the time of his death.

"That was the last disc he ever tried to get," said park visitor Derek Erskin, 37. "Hopefully, he's at peace now with the lord and that's the best we can wish for."

Erskin said he saw McGuinness in the lake two weeks before he died and took a photo of the transient man in chest-deep water. Erskin said he talked to McGuinness, who said he knew what he was doing was dangerous.

"He was fully aware," said Erskin. "He seemed to be pretty comfortable with what he was doing."

Through a public records request, Spectrum Bay News 9 obtained communication reports from Largo Police that showed the park ranger tried to have McGuinness officially trespassed from the area one month before his death.

On April 11, McGuinness was seen going into the water around noon trying to retrieve discs and was warned against doing it, one report said, noting that he did not heed the warning.

A few days later, on April 19, McGuinness was seen at Taylor Park in the early morning hours diving for discs and the ranger called Largo police to trespass him.

During both incidents, when officers arrived at the park they were unable to locate McGuinness and trespass him, according to Santo.

Ryan McKinley, 47, said McGuinness was his best friend, has no family in the state and lived in his Largo home for nearly 8 years. McKinley said his friend could get up to $5 per disc he recovered and could earn up to $150 in a single day.

"They made it to where he could make a living off of it. He didn't ask for handouts — he worked," said McKinley. "He made his living no matter how he had to and I respected him for that."

McKinley said McGuinness suffered from some serious health issues, too.

"He didn't have health insurance," he said. "He was diagnosed with a tumor on his pituitary gland and epilepsy with grand mal seizures." ​

McGuinness had lived with his friend since 2014, but was asked to leave the home in January due to his health issues causing problems, according to McKinley.

"It started causing problems with my family and that's why I had to ask him to leave," he said. "It still kills me to this day, because I do blame myself a little bit."

McKinley said it seemed like McGuinness had given up on his health and that's one reason he wasn't scared of the gators in the lake.

Licensed trappers with the Florida Fish and Wildlife Conservation Commission pulled two big gators out of the lake last week, but necropsies showed they weren't involved in McGuinness' death.

"He would've been upset that they're killing the gators," said McKinley. "He doesn't want that."

FWC continues to investigate and has not captured any additional gators from the lake, according to spokeswoman Melody Kilborn.

"Subsequent surveillance efforts revealed no additional large alligators in the immediate area," she said. "Our sincere condolences go out to the family and friends of the victim."

Kilborn said FWC's response to bite incidents is to remove the alligator that poses a public safety risk.

"The FWC coordinates with officials to identify the alligator that poses a risk and uses sound methods to meet public safety needs and minimize unneeded removals," she said. "Although many people have learned to coexist with alligators, the potential for conflict, though rare, does exist."

According to information from FWC, there have been four people killed by alligators in Florida since 2008. Experts say the likelihood of a resident being seriously injured during an unprovoked alligator incident is roughly one in 3.1 million.