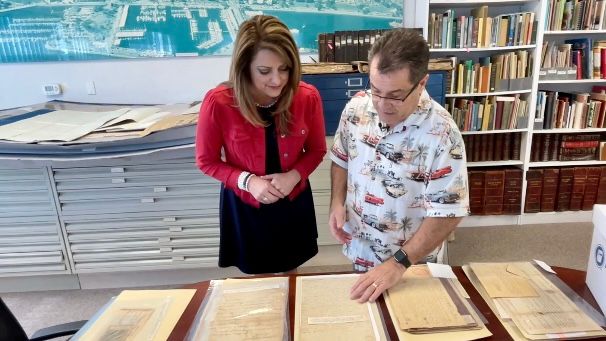 Letters dated from 1775 describe Florida as a land filled with possibly for trade and resources for the British. Rui Farias, head of the St. Pete Museum of History, explains there were 15 American British colonies, not 13. East and West Florida were the 14th and 15th, and they sided with the British. (Photo by Justin Rogers)

Florida’s place in American history has always been complicated.

That’s why we came to the experts.

“This is just a small sample of things we have on display," said Rui Farias.

Farias is showing us the galleries at the St. Petersburg Museum of History.

He says being Executive Director of the museum is his dream job.

This, after retiring from his first career, 20 years of teaching Florida History and coaching soccer at St. Pete High.

“This is where we keep all the cool stuff,” Farias said, smiling.

He has several pieces of worn and yellowed paper in archival protective covers set out in row on a table.

“When the Revolutionary War began, there were 15 English American Colonies - not 13,” he explained. “There was West and East Florida. American History books kind of completely ignore them.”

Farias explains these two colonies remained loyal to the British.

“We became an area that Great Britain was very interested in for shipping and controlling the seas,” he said.

The letters from the archival vault back that up.

One letter dated 1775 from a land surveyor to the British Empire said Florida – the land of sun and flowers — was amazing.

It was also a potential deep-water port—and a place to build a fort.

“They wanted to know how deep the water is so they could see what kind of shipping they could get in and out of here,” said Farias.

Now the British lost all this, but got the Bahamas.

And to keep telling this complicated story of La Florida, the museum is planning an 11,000 square foot expansion — complete with an artistic take on Florida’s history— called “Intersections,” by Ya La’ford.

“This is an actual 1891 Florida Railroad Map, turned on its side,” Farias said, of the La’ford’s work.

The museum hopes to break ground on their expansion in 2023 and open in 2024.