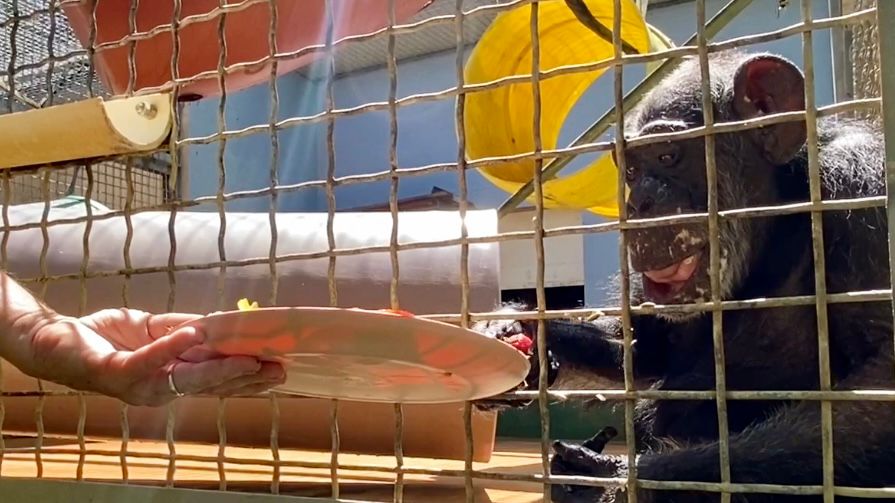 Sheila the Chimp takes fruit off her plate at the Suncoast Primate Sanctuary in Palm Harbor. The sanctuary is home to more than 120 great apes, monkeys, exotic birds and reptiles Photo by Bobby Collins

Cobb is preparing one of the five meals she offers to the chimpanzees every day.
“I’m five generations. My daughters are 6 generations of taking care of great apes,” she says, arranging chicken and fruits on a plate.

Chimps are one of the Great Apes that also includes orangutans, Bonobos, Gorillas and humans.

“They are all critically endangered, so if we are not gonna save them in the wild, what are we going to have in the future?” Cobb asked.

For right now-the future is food-Cobb hands the meal to Sheila. Sheila takes the fruit off her plate first. It’s a meal of strawberries and bananas.

“They are like little kids. They have preferences,” said Cobb.

Sheila was one of the first Chimpanzees to come to the sanctuary. It opened in 1954. Cobb sees the similarities to humans, and it’s not just their diet.

“They have fingerprints like me and you. They carry their babies for the same time,” said Cobb.

And they enjoy human pursuits and hobbies too. That includes fingerpainting. It’s part of the Great Ape enrichment.

“Sometimes we let more than one artist work on a finger painting,” Cobb said.

Cobb is trying to reach the next generation of humans for Sheila’s future and that of her wild counterparts.

The celebration is happening during their Saturday hours, which are from 10 a.m. to 4 p.m. The sanctuary accepts donations for admission and also for their great ape art.
Admission suggestions: $15, $10 for children.