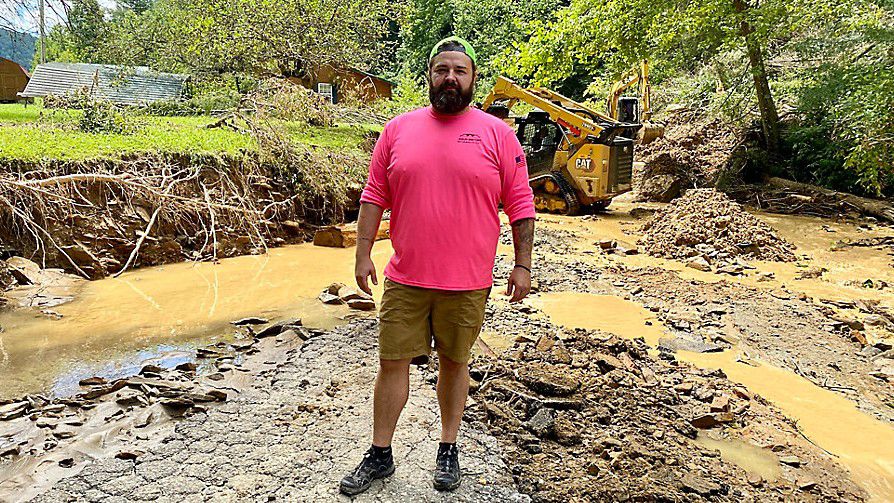 A blocked road in a Knott County holler is preventing Zack Hall from reaching his uncles who's been trapped in his home for one week. Photo: Josh Rojas

Over two dozen residents in a Knott County valley have been trapped in their homes because of debris blocking the road from an epic flood that hit Kentucky one week ago today, according to Knott County tourism director Zack Hall.

“If you’ve ever just been trapped, it’s a scary thought to think that I can’t get to what I need,” said Hall. “It’s a mess that’s going to take a long time to fix. Especially with no money in this area.”

About a quarter-mile up the road from the blockage is where Hall’s diabetic uncle lives. Hall said he used an off-road vehicle to carve his own path through neighboring properties to bring his uncle water and food after the flood hit overnight on July 28.

“I’m really worried about my uncle. He’s an older man,” said Hall. “He’s up there alone and if you know anything about tragedy, sometimes the heartbreak can really kill people.”​

On Thursday, crews began working to clear the road. A landslide shifted the creek onto the road and broke a water main line that was gushing fresh water too. Hall said he really appreciates the help.

“Thankful for all the crews from around the state and around the country that has come in,” he said. “Just to push a path.”

Hall said on Wednesday, the National Guard landed a helicopter to deliver supplies to people still trapped in their homes. Many of the homes below the blocked road are still without power or water.

Knott County has been one of the hardest hit areas, with 17 of the 37 official deaths in the state so far, with hundreds more still unaccounted for. Hall said the community has been making good progress on the cleanup, but it’s going to take a long time before things get back to normal.

“I’m surprised by how many roads are cleared,” he said. “Hopefully, in the weeks to come, people don’t stop helping. They don’t think, well, everything’s good because it will not be for a long time.”