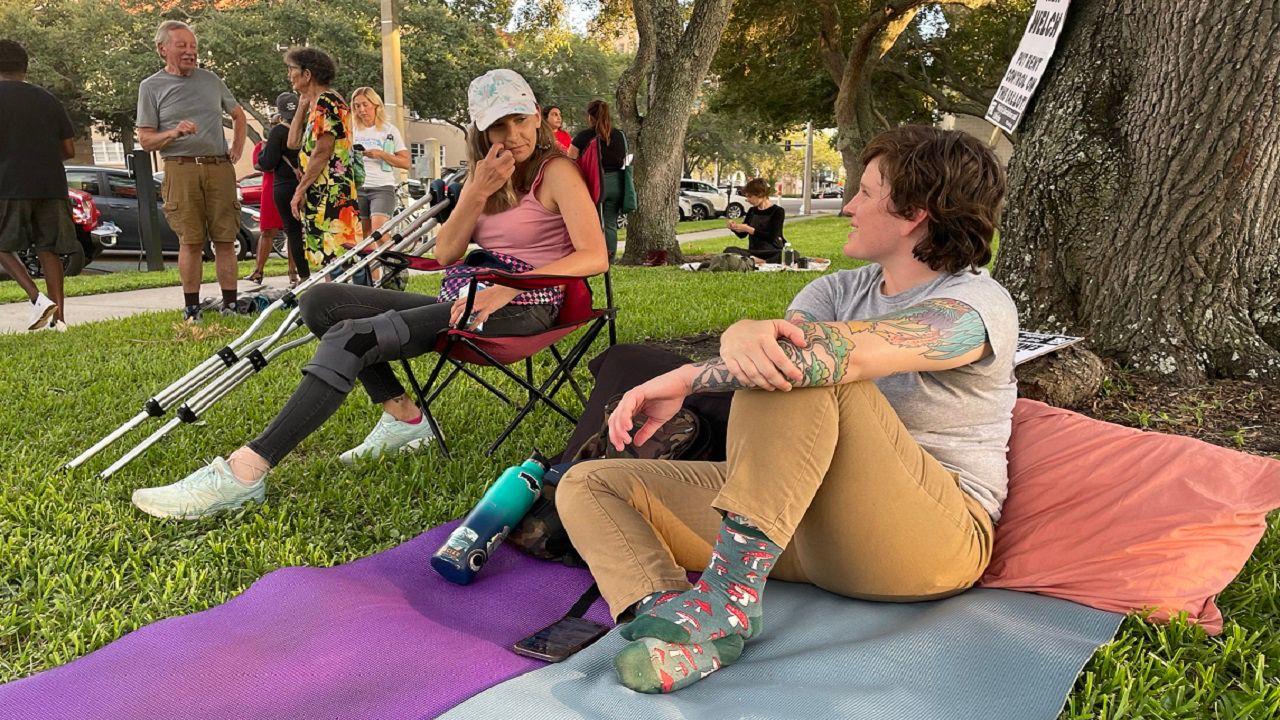 "We're not telling city council to endorse rent control. We're saying give us the option to vote on rent control," said Karla Correa, an organizer with the Party for Socialism and Liberation.

"If I get bored or something, I have multiple options to stay busy, but I'm actually really looking forward to engaging with new people and the different people that are going to show up," Cole said.

Cole said this is an issue that hits close to home.

"I joined the military because I was homeless," said Cole, a Sarasota native. "I fell on hard times pretty much right out of high school. My mom's house was getting foreclosed on, so I didn't feel like I could go back home. Despite working three jobs, I was trying to put myself through college at the time, just couldn't figure it out. I lost my housing situation and was homeless for about four months before I, in my opinion, took a pretty drastic measure and joined the military to afford college and to kind of get myself back on track. So, this is not new to me."

Moving to St. Petersburg around the beginning of the year brought new challenges.

"I couldn't find housing. I had to move in with a friend, which was not where I needed to be. I needed security," said Cole.

Organizers said they want the city to follow Tampa in declaring a housing state of emergency. This could pave the way for getting rent control on the ballot. A council committee voted against a rent control resolution back in February. A state law makes it challenging to implement rent control, and City Council Chair Gina Driscoll said via e-mail that she voted against the move because it didn't seem to be a good option given the statute.

"I expect that the issue will come up in tomorrow's city council meeting, although I don't believe we have time to fully vet the issue, agree to the language and hold the public hearings in time to get it on the November ballot - if it even has the votes," Driscoll wrote. She said wants to work on affordable housing in ways that don't put the city at legal risk.

Correa said the more local governments that declare housing states of emergency, the more likely that change might be seen on a wider scale.

"Democratic legislators, they've tried to get rent control on the state level, and this strengthens the case for them to do that," Correa said.

Cole plans to speak at the council meeting, despite saying it seems like past appeals to members haven't been heard.

"I want them to hear not only the desperation, but the relentlessness in our voices," Cole said.

Mayor Ken Welch addressed the sleep-in in a statement, saying, "Housing has been a fundamental priority for our administration since day one, and is one of our five Pillars for Progress. We are working diligently with City staff to identify and implement strategies to provide more affordable and workforce housing units in response to rising rents and homeownership costs. Participants in the planned sleep-in at City Hall are exercising their First Amendment rights and are welcome to speak during public comment at Thursday's city council meeting. We have had conversations with the Tenants' Union about this issue and appreciate their ongoing engagement."

The city council meeting is expected to begin at 9 a.m.