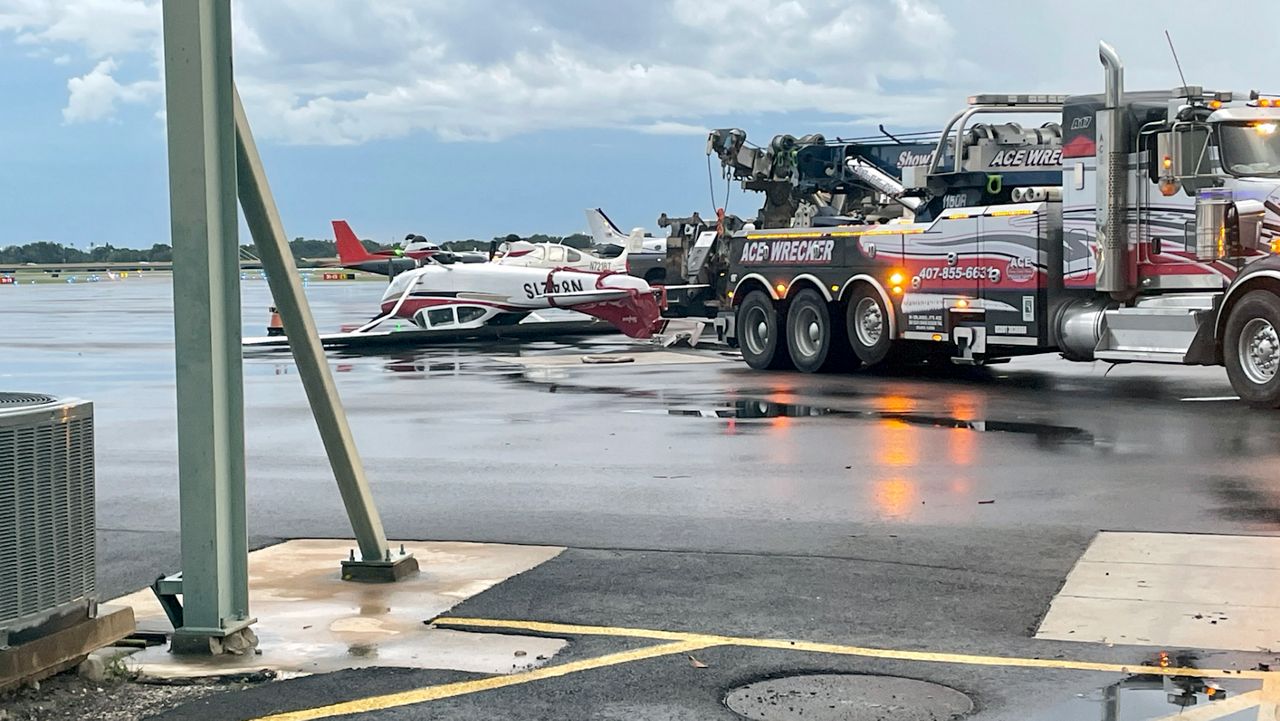 Emergency workers respond to a plane that was flipped over by strong winds at Orlando Executive Airport Thursday. (Spectrum News/Dylan Lyons)

According to information from the Orlando Fire Department, one person was killed and another was injured after two aircraft flipped in strong winds at Orlando Executive Airport Thursday evening.

The Greater Orlando Aviation Authority confirmed that the aircraft flipped during a severe thunderstorm warning, but said they were located in different parts of the airport.

OFD spokeswoman Jenny DeSantis said one person was already dead when first responders arrived at the scene, and a second was taken to Orlando Regional Medical Center.

Only one airplane was occupied at the time, GOAA spokeswoman Carolyn Fennell said.

The occupied aircraft was a twin-engine plane on a taxiway near Runway 7 on the west side of the airport complex, while the other was a single-engine craft parked in the apron area in front of Atlantic Aviation on Herndon Avenue on the north side of the airport, officials said.

One of the planes that was damaged at Orlando Executive Airport during today’s severe weather was flipped over using a wrecker. This single engine Cessna 182 was unoccupied at the time it was initially flipped over. Officials are still here at the airport. @MyNews13 pic.twitter.com/7PoymNeRZp

Nick Hendershot said this kind of incident hits home for him and other local pilots.

"Wind blows over planes quite often around airports all around the state, which is why everybody secures them the best they can," he said. "Storms here in Florida get pretty intense."

Aspects of planes that allow them to fly are what makes high winds possible, Hendershot explained.

“They are expensive, they are small but they are light. They are lighter than a car for the most part. They just don’t have the weight and it doesn’t take a whole lot of wind to get them air borne. You start approaching 60, 70 mile per hour winds something like that it is very easy for this thing to get lifted off the ground,” he said.

The severe thunderstorm warning was issued at 4:46 p.m. Thursday and expired at 5:15 p.m. The warning included a call for hail and winds at speeds up to 60 miles per hour.

The Orlando fire and police departments responded to the incident. The National Transportation and Safety Board and GOAA are assisting with the investigation.

One of the planes that was damaged at Orlando Executive Airport during today’s severe weather was flipped over using a wrecker. This single engine Cessna 182 was unoccupied at the time it was initially flipped over. Officials are still here at the airport. @MyNews13 pic.twitter.com/7PoymNeRZp