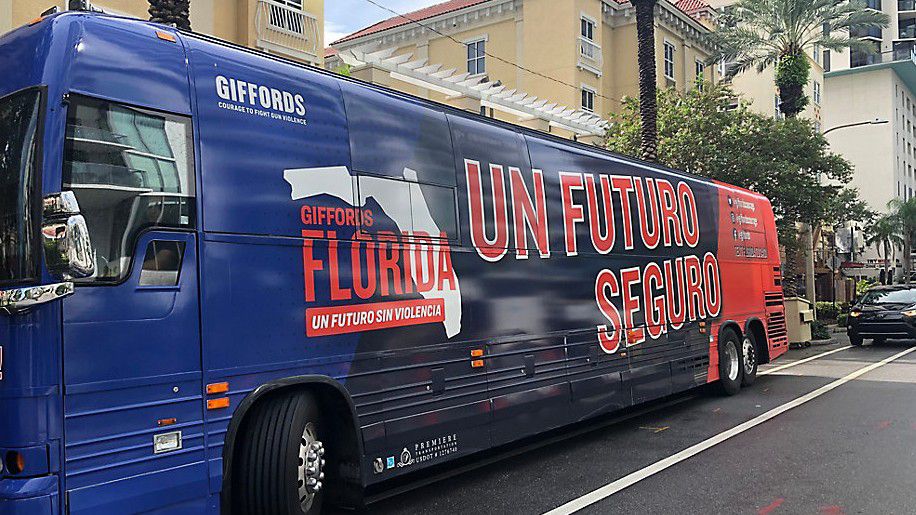 Some are asking if gun safety can be an issue that benefits Florida Democrats at the ballot box in November.

Officials with the gun safety group Giffords Florida said  it’s an issue that voters in the Sunshine State, particularly Hispanic voters, care deeply about, as the group’s bus tour made stops in St. Petersburg and Tampa on Friday morning.

“We know that gun safety is a winning issue in Florida and across the country,” said Giffords Florida senior advisor Debbie Mucarsel-Powell at a press conference held at the Hampton Inn & Suites in St. Petersburg. “Polling is showing us that voters, especially in Latino communities, (gun safety) is a top concern.”

Giffords Florida recently commissioned a poll, conducted by SEA Polling, of 722 registered and likely Florida voters that 76% of respondents supported universal background checks, and 61% opposed Gov. Ron DeSantis’ stated promise to remove a requirement to get a permit before carrying a gun in public, a proposal dubbed as “permitless carry” by opponents and “constitutional carry” by its supporters.

In responses to those and other questions posed in the survey, Hispanic voters showed more support for gun regulations.

Mucarsel-Powell also noted how in one poll of Latino voters taken by Axios-Ipsos shortly after the mass school shooting in Uvalde, Texas, in June showed that more Latino voters were concerned about gun violence and crime than inflation.

Giffords Florida has a bilingual team running the local chapter, including Mucarsel-Powell and state director Samantha Barrios, a Miami resident who previously worked for Moms Demand Action before being hired by Giffords earlier this year.

“Many of us who have fled our countries, have fled because of personal experience," said Barrios, who was born and raised in Venezuela. "Somebody around us has been affected by gun violence, so when we moved here, we were seeking safer ground."

The Giffords Florida Bus Tour features Democrats on the ballot this fall who are being touted by the group as “gun safety champions.”

The St. Petersburg event featured Congresswoman Kathy Castor, who now has a portion of eastern Pinellas County in her reapportioned congressional district. During her appearance, she took aim at Florida U.S. Republican Sen. Marco Rubio’s record on gun safety.

“I want people to know that they have a U.S. Senator serving right now who is not on your side,” she said. “Who has time and time again sided with the gun lobby.”

Rubio has received more than $3.3 million from the NRA, according to data compiled by Brady, the nation’s oldest gun violence prevention advocacy group.

The Rubio campaign responded by referring to his past congressional support for measures such as the Extreme Risk Protection and Violence Prevention Act, which would dedicate DOJ funds to incentivize states to adopt law similar to Florida’s red flag law and the STOP School Violence Act.

“In the aftermath of Parkland, Sen. Rubio sat down with Republicans, Democrats, students, parents, law enforcement and others to find common ground," said Rubio campaign spokeswoman Elizabeth Gregory. "While they didn’t agree on everything, they were able to make significant progress, including with the STOP School Violence Act.”

Castor also praised President Joe Biden for signing the first major gun safety legislation passed by Congress in 28 years earlier this summer. That bill received some Republican support but was opposed by both Rubio and Florida U.S. Sen. Rick Scott.

Among the provisions in that legislation was a measure similar to Rubio’s Extreme Risk Protection and Violence Prevention Act. It gives financial incentives for states to pass red flag laws that allow groups to petition courts to remove weapons from people deemed to be a threat to themselves or others.

Former Pinellas County GOP congressional candidate Amanda Makki told Spectrum Bay News 9 this week that she would not have voted for the gun control bill passed by congress and signed by the president, because she doesn’t believe in red flag laws.

“As an attorney, I’ve seen how it’s been abused in domestic cases,” she said. “And it’s been used to basically take away people’s Second Amendment rights, and I don’t agree with that at all. I think that it has been abused in a lot of ways.”

And on Sept. 13, the last day of this tour, Giffords co-founder Gabby Giffords will make a couple of appearances in Orlando.