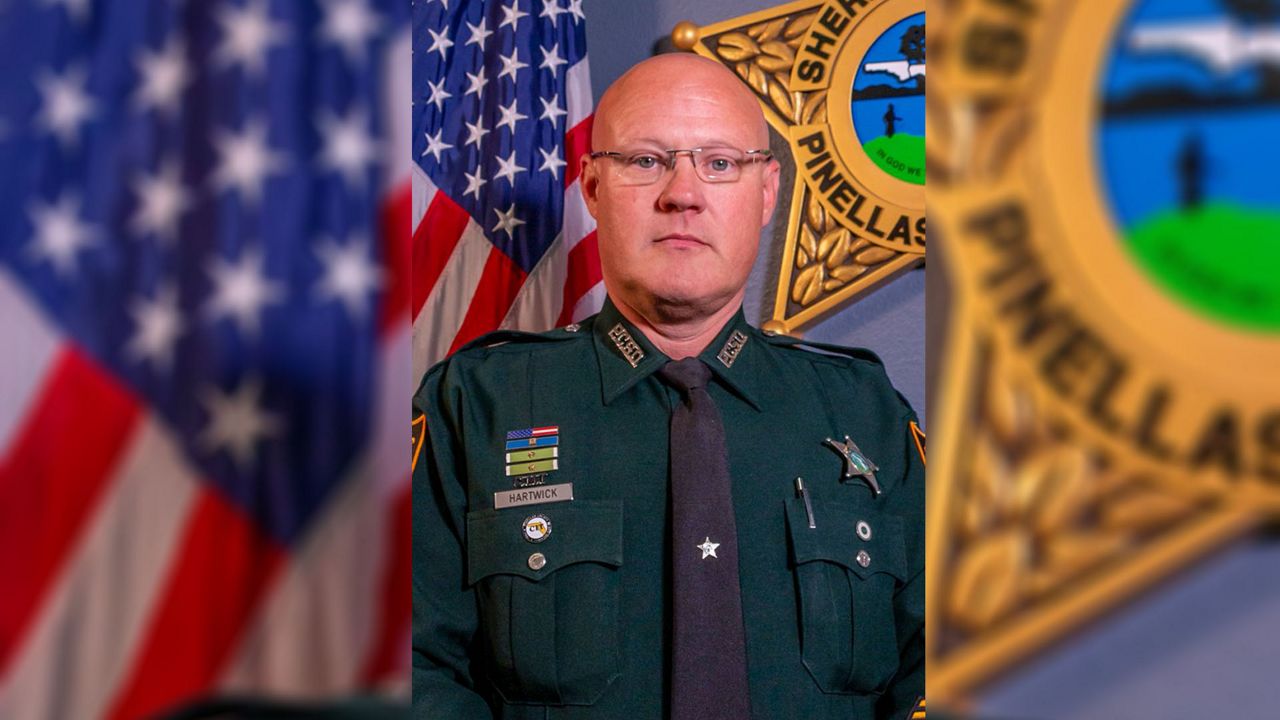 ST. PETERSBURG, Fla. — Officials say a Pinellas County deputy was killed overnight in a hit-and-run crash at a construction site on Interstate 275 near Roosevelt Boulevard.

The Pinellas County Sheriff's Office has announced the suspect in the hit-and-run death of a deputy was taken into custody after an eight-hour search in the Ulmerton Road and I-275 area.

According to Pinellas Sheriff Bob Gualtieri, Deputy Michael Hartwick, 51, was killed when he was struck by a front-end loader being driven by a construction worker just after 10:30 p.m. Thursday night.

The suspect was initially believed to be Victor Vasquez-Real by deputies. The individual allegedly involved was later identified as a 32-year-old undocumented immigrant named Juan Ariel Molina-Salles, Gualtieri said during a press conference on Friday afternoon.

Gualtieri said that Molina-Salles had entered the country illegally in October of 2021 in Eagle Pass, Texas, was caught at border and sent back to Mexico, and came back through the Texas border, and has been in the Bay area since March of this year.

"The Florida Department of Transportation (FDOT) offers our heartfelt condolences to Deputy Hartwick’s family and the entire law enforcement community. From all accounts, Deputy Hartwick was a model law enforcement officer, and we stand willing and able to assist the Pinellas County Sheriff’s Office in any way possible.

FDOT and its contractors follow strict hiring procedures. While it appears that these hiring procedures were followed, including a federal E-Verify clearance check, and the individuals in question passed this federal clearance, the Department is initiating an internal review on this project contract. FDOT will also continue to support law enforcement efforts as investigations continue."


Molina-Salles is facing a second-degree felony charge of leaving the scene of an accident with death.

The crash happened in the southbound lanes of I-275 in the construction area near the Howard Frankland Bridge. Hartwick, a 19-year veteran of the agency, was working an overnight construction security assignment.

Gualtieri said the suspect was sought after fleeing the scene after the crash.

According to Gualtieri, Molina-Salles drove to a parking area after hitting Hartwick, parked the front-end loader and then took off his helmet and vest. Gualtieri added that Vasquez handed his gear to another worker, allegedly said he had just "killed a deputy" and left the scene.

The construction worker who allegedly hid Molina-Salles' uniform was identified by deputies as 31-year-old Elieser Aurelio Gomez-Zelaya, and was also arrested, according to Gualtieri.

"Deputy Hartwick was doing what cops do every day," Gualtieri said. "He was out doing his job. He was on his assigned post, he was trying to protect the scene out there for the construction workers.

A heavy law enforcement presence was in the area for several hours, using K9s, ATV vehicles and helicopters. More than 100 deputies created a perimeter in the area.

As a result of the crash, I-275 traffic was snarled across the area throughout the overnight hours and into late morning Friday.

"I'm deeply saddened to learn of the passing of PCSO Deputy Michael Hardwick. These men and women put their lives on the line day in and day out and it's imperative to us avoid avoidable accidents that caused this tragedy. Our entire St. Pete family sends our love and prayers to Deputy Hardwick's friends and family may your PCSO family remain strong and protected."

The Pinellas Sheriffs Office honored Deputy Michael Hartwick, 51, by placing flowers on his cruiser. Dep. Hartwick was killed when he was struck with a front end loader at an I-275 construction site he was guarding last night. @BN9 pic.twitter.com/DUaKKlR60M

WATCH: Pinellas County law enforcement, as well as others from Bay area agencies, were part of the procession that brought Dep. Michael Hartwick's body to the medical examiner's office. https://t.co/IunYZ9MP7x pic.twitter.com/vd354AxiQf

I just watched as deputies pulling ATVs turned down a closed down stretch of Roosevelt Blvd.

The suspect who ⁦@SheriffPinellas⁩ believes was involved in the hit-and-run crash that took a deputy’s life is still at large. He took off after the incident ⁦@BN9⁩ pic.twitter.com/YFwziP4iA3

BREAKING: A Pinellas County deputy was killed overnight in a hit-and-run crash on Interstate 275 near Roosevelt Boulevard. The resulting suspect search and investigation has closed I-275 in both directions at Roosevelt. Details: https://t.co/IunYZ9MP7x pic.twitter.com/hlck7lllmA