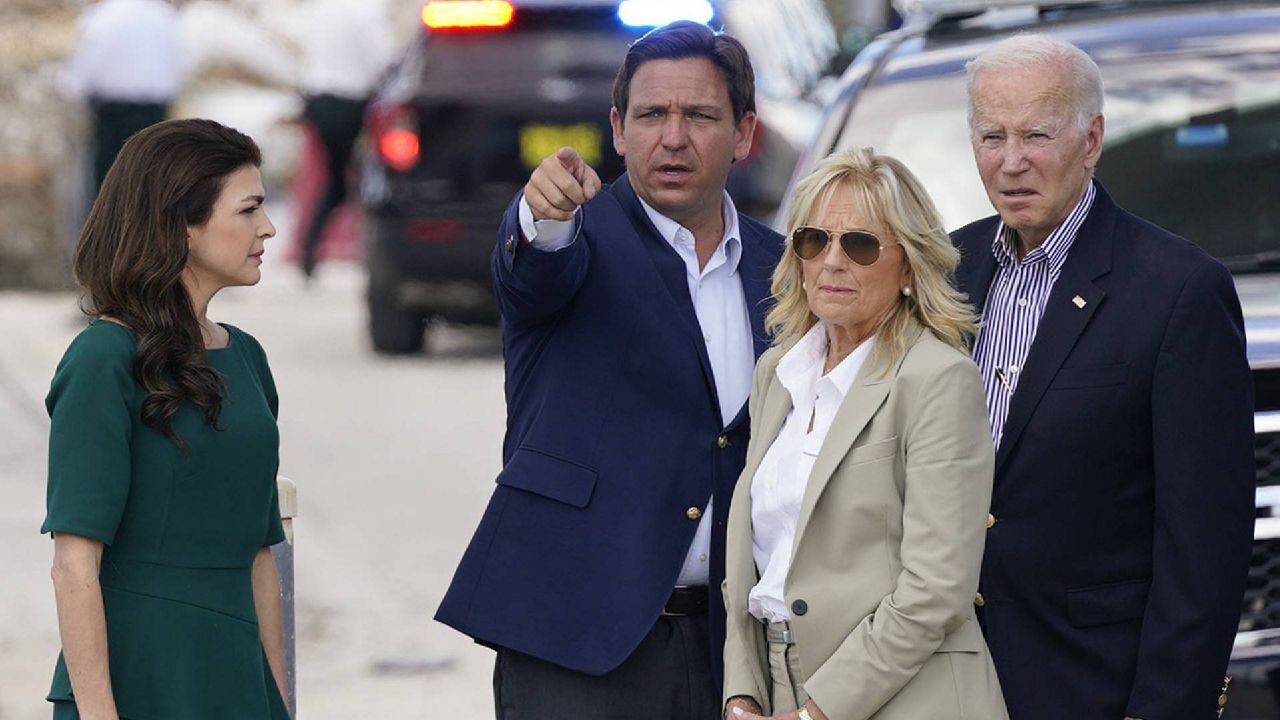 President Joe Biden surveyed southwest Florida's damage from Hurricane Ian by helicopter on Wednesday, meeting with local people impacted by the storm and giving an update on recovery alongside the state's Republican Governor Ron DeSantis.

In Fort Myers, DeSantis and Biden shook hands, thanking each other for mutual support and praising first responders for making thousands of rescues, distributing food and water and beginning the process of restoring homes and power.

Asked what he thinks about the governor's handling of the crisis, Biden praised his work: “I think he’s done a good job." 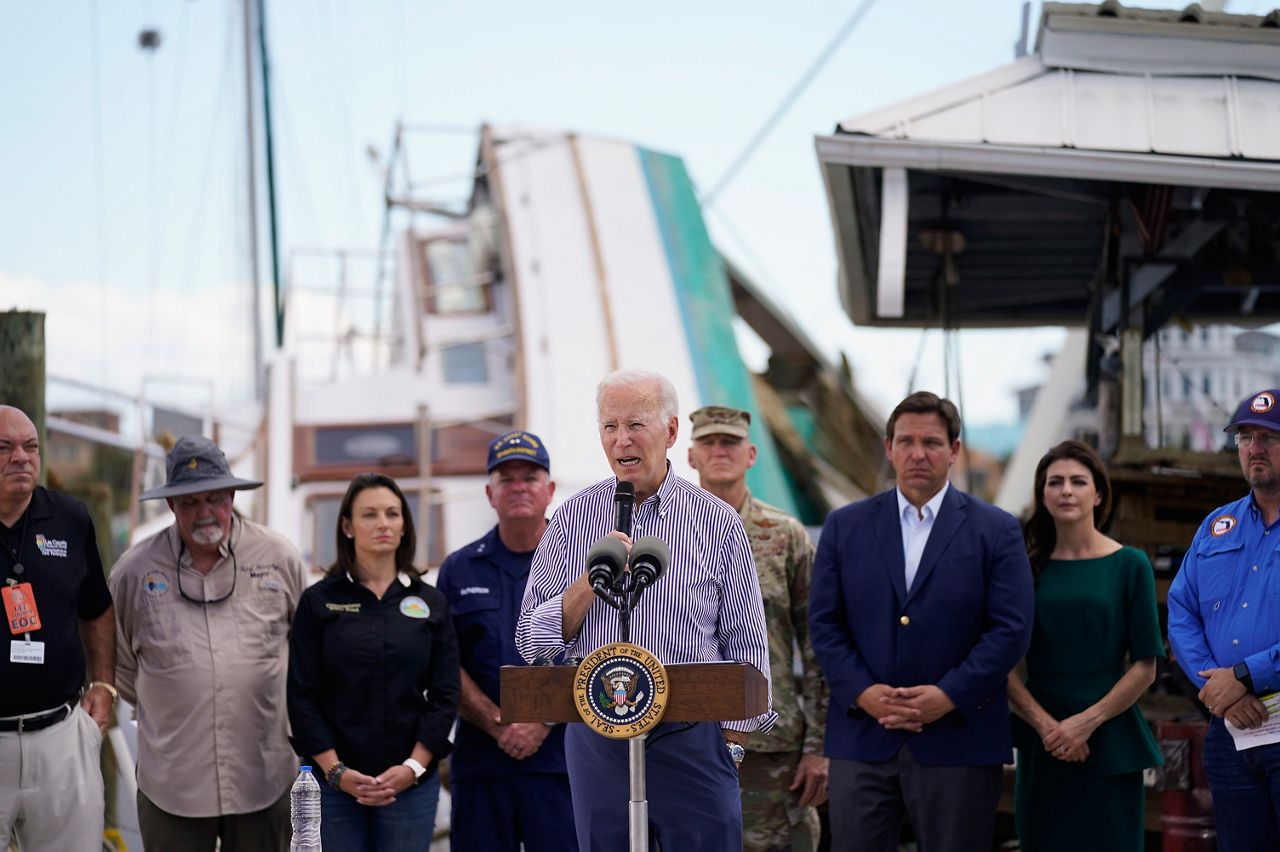 The president told Floridians impacted by the storm, some of whom he spoke to on the ground in Fort Myers: "We're not leaving until this gets done."

"We have one job and only one job, and that's to make sure the people of Florida get everything that they need to fully, thoroughly recover," he added. "We're one of the few nations in the world that, on the basis of a crisis we face, we're the only nation that comes out of it better than we went into it."

Biden noted that climate change was clearly evident not only in the intensity of Hurricane Ian but also in the several other disaster sites he's toured as president, including wildfires in the western United States. 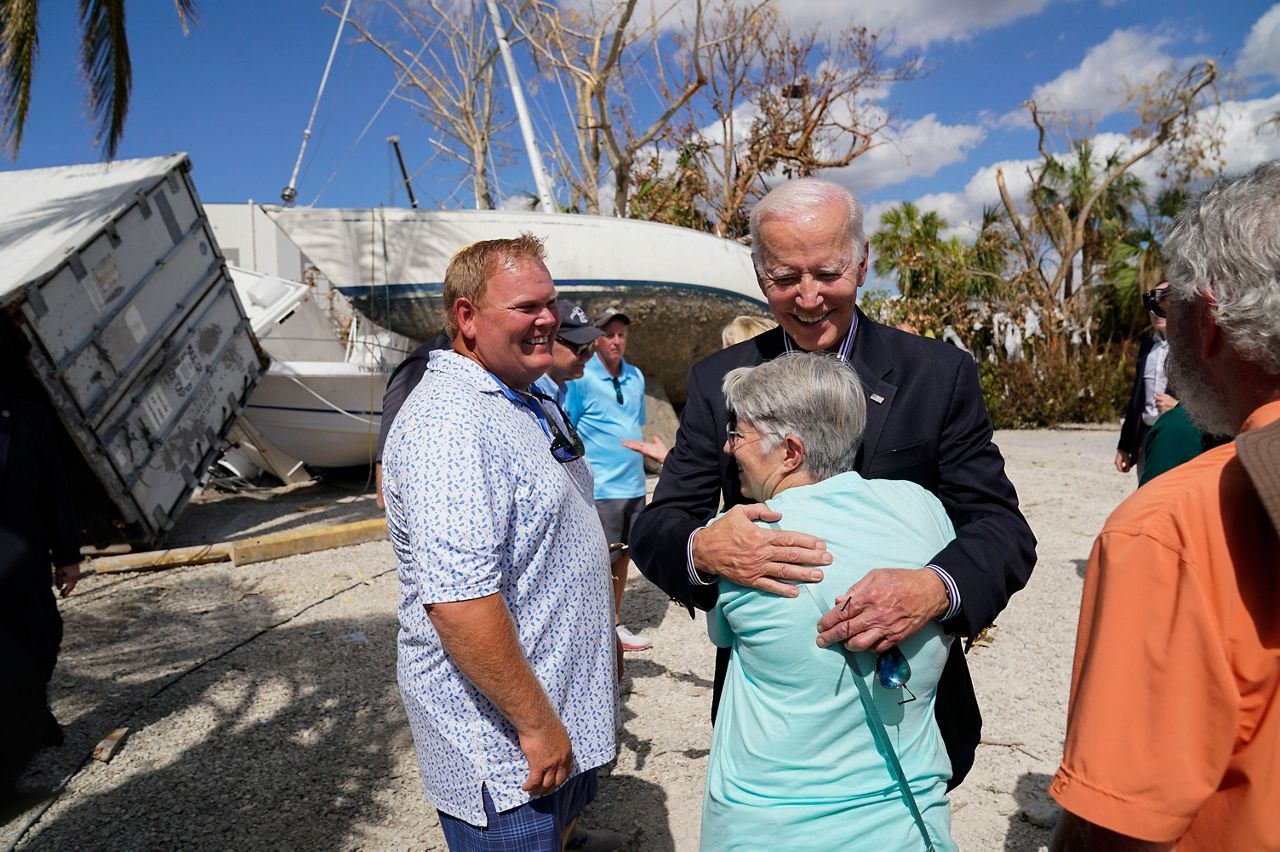 Biden predicted the state would need more than two months of federal disaster aid from the Federal Emergency Management Administration, which covers debris removal, individual assistance and other recovery costs in hard-hit areas.

The president on Wednesday had extended the coverage for another 30 days to last through late November, but he acknowledged in Fort Myers that full recovery will take "years." Learn more about federal aid here. 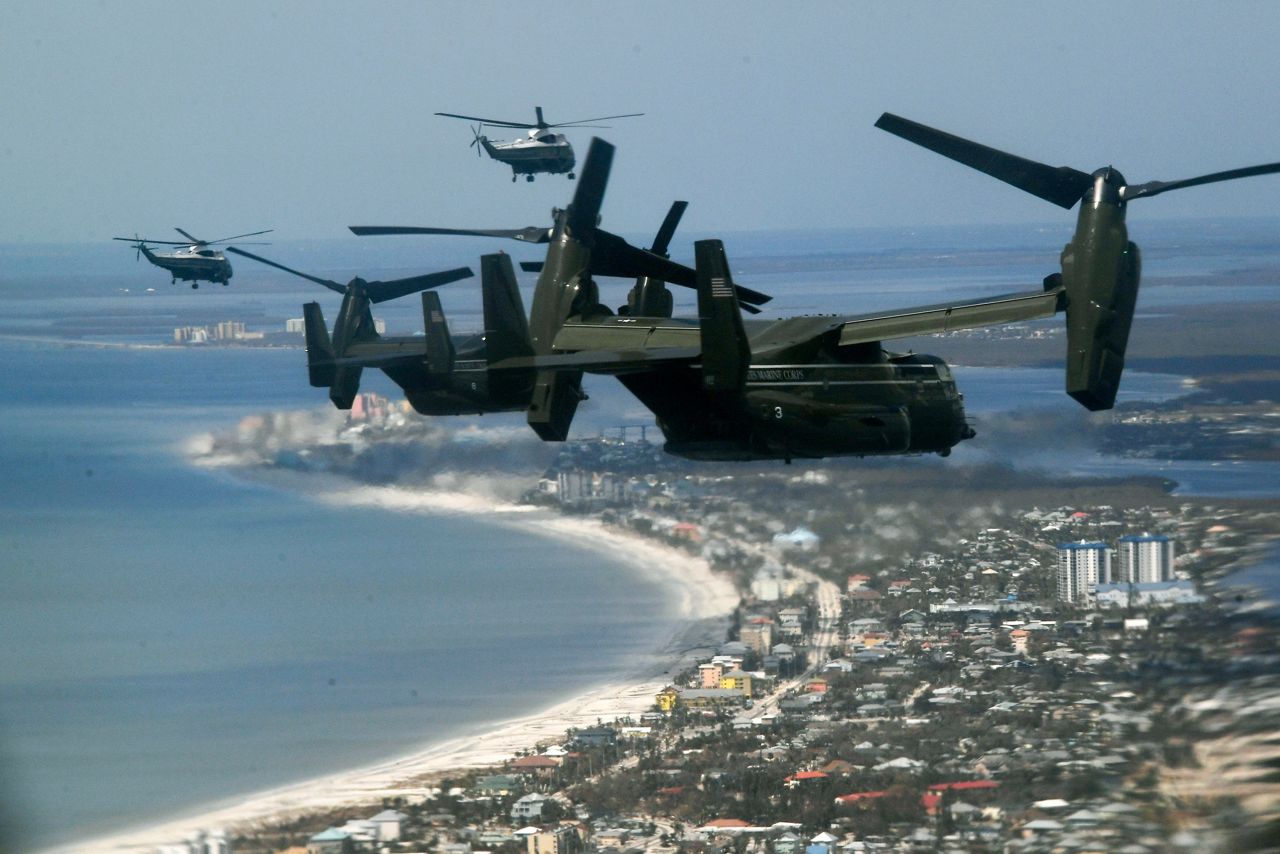 In this image taken through a window, President Joe Biden and first lady Jill Biden take an aerial tour to view the storm-ravaged areas after Hurricane Ian on Marine One, Wednesday, Oct. 5, 2022, in Fort Myers, Fla. (Olivier Douliery/Pool Photo via AP)

DeSantis said Wednesday that about 2,500 rescues had been made so far, with about 1,000 search-and-rescue staff working in the area. Now 97% of the state has power, with the exception of a good portion of southwest Florida.

Biden also acknowledged delays in people getting access to FEMA funding, including hourslong wait times over the phone.

"We talked about that on the way down in Air Force One. We're gonna try to speed that up by having additional personnel," he said. "So you have to have a little patience for us to get it all done."

The president said about 200,000 people had applied for direct aid so far, for things like food, clothing and temporary housing. Floridians are eligible for up to $37,900 in funds, plus the same amount for home repairs if they qualify. 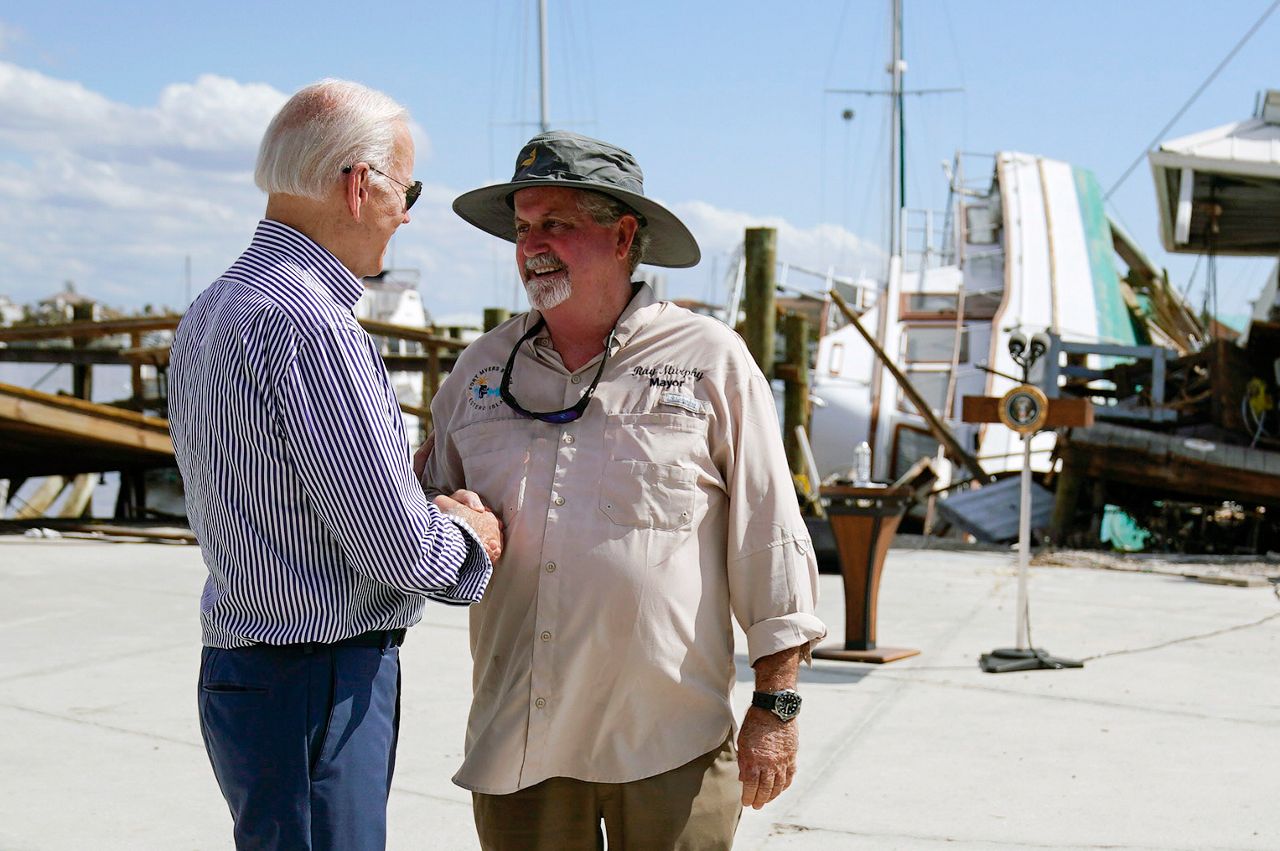 Earlier Wednesday, FEMA Administrator Deanne Criswell told reporters traveling with the president that the decision to extend the aid was because the damage from Ian is "catastrophic."

She estimated the cost of recovery "is going to be in the billions," calling it "perhaps one of the more costly disasters in many years."

Criswell announced that FEMA would open three emergency recovery centers on Thursday, after opening the first on Tuesday in Fort Myers next to one of the state's insurance villages.

"We know that people want to talk to somebody, right? They want to do face to face," she said.

She also addressed the long wait times for aid, including in underserved areas without easy access to transportation or internet.

Criswell admitted that the beginning days after a disaster are always "congested" but that FEMA has surged personnel, both thousands of new phone operators and personnel on the ground who can help with long lines at insurance villages.

That includes disaster survivor assistance teams who walk around with iPads and can get people registered in hard-hit communties who may not have easy access to resources.

“This is going to be a very complicated recovery process for long-term housing and permanent housing for many families,” Criswell said.

FEMA has also now activated its hotel program, she added, which opens up temporary housing to people whose homes are destroyed or badly damaged.

“There are communities that have to be completely rebuilt. So our role is to provide that temporary housing for families," she added.

DeSantis and Biden also set politics aside last year when Biden traveled to Florida after the deadly building collapse in Surfside.

This week, Biden first traveled to Puerto Rico on Monday to survey damage from Hurricane Fiona, also commiting federal support for the island for the long haul.