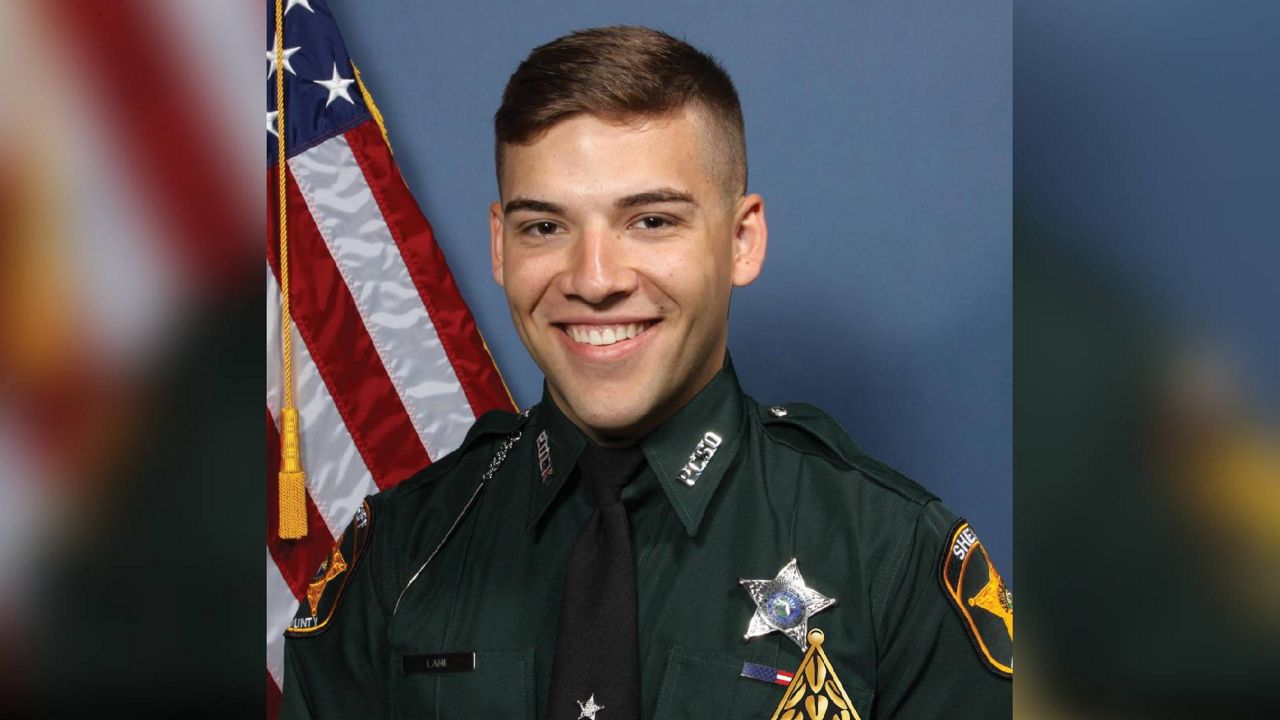 Deputy, 21, was shot accidentally by fellow deputy while serving a warrant in Polk City

According to Polk Sheriff Grady Judd, the shooting happened at 3:15 a.m. in the Foxtown South area of Polk City.

The shooting happened as four deputies were serving a warrant at a mobile home, Judd said.

Our hearts are broken today. Deputy Lane was a wonderful deputy who died doing what he loved. Please keep his family and our agency in your prayers.

The Polk County Sheriff’s Office received a tip that 46-year-old Cheryl Lynn Williams, who had an outstanding felony warrant for failure to appear on a possession of methamphetamine charge, was at 4345 Foxtown South, officials said.

Williams has a criminal history that includes 11 felonies and four misdemeanors, and she spent 9 years in the Florida state prison system out of an 11-year sentence for trafficking in meth, according to deputies.

"The deputies responded to a failure to appear on a felony meth warrant," Judd said. "The deputies entered the trailer successfully. Shots were fired and ultimately one of our very young deputies died at Lakeland Regional Medical Center."

According to the Polk County Sheriff’s Office, the first witness at the trailer home told the deputies when they arrived at the front door that Williams was at the back door. Officials said the second witness who was at the back door told them, “She’s in here,” and all of the deputies except Lane went inside. Lane took up a tactical position outside the trailer near the front side so he could watch the door and windows to make sure that he would see the suspect in the event she tried to flee, deputies said.

Deputies said that Williams then stepped into view armed with a silver handgun, which she immediately pointed at them, and shots were fired and the suspect went down. Lane then reported that he had been shot in his arm, officials said, and he was transported to Lakeland Regional Health Medical Center, where he died. Officials said that Williams was also transported to a local hospital to be treated for multiple gunshot wounds and is in stable condition.

Officials said that the handgun that Williams pointed at deputies turned out to be a very realistic-looking BB gun.

The Polk County Sheriff’s Office said that according to the early investigation, it appears that two other deputies fired their agency-issued firearms, and the round that struck Lane came from one of their firearms.

Polk Sheriff says two deputies fired at Cheryl Williams, 46, after she pointed a BB gun at them inside a mobile home. Sheriff said one of the rounds went through an exterior wall and killed deputy Blane Lane, 21, who was in a tactical position outside. @BN9 pic.twitter.com/ahDNrQRDeY

Judd said that Lane had only been with the agency for a short period of time.

“He was a great deputy,” said Judd. “He was eager. He was brilliant. He learned. He absorbed information like a sponge. And he was careful when he did his job.”

According to the Polk County Sheriff's Office, Lane entered the Polk State College KCTIPS dual law enforcement-detention academy in September 2020, graduated, and was hired as a Detention Deputy in May 2021, and he then became a Deputy Sheriff in January 2022, and was assigned to Northwest District Patrol.

A procession was put together to escort the deputy's body to the medical examiner's office.

The Polk County Sheriff’s Office has charged Cheryl Lynn Williams with 13 felonies in the death of Deputy Sheriff Blane Lane, who died in the line of duty on October 4, 2022:

·     2 counts possession of ammunition by a convicted felon (F2)

She will be booked into the Polk County Jail upon her release from the hospital, where she remains in stable condition.

It’s been a heartbreaking few weeks for law enforcement in #TampBay. Deputy Blane Lane, 21, seen here with @PolkCoSheriff on the day he was sworn in eight months ago, was fatally shot this morning while serving a warrant in #PolkCity. @BN9 #bn9polk pic.twitter.com/ElsI77t9ur

POLK DEPUTY KILLED: A 21-year-old Polk County Sheriff's deputy has died after an early-morning shooting Tuesday. According to Polk Sheriff Grady Judd, the shooting happened at 3:15 a.m. in the Foxtown South area of Polk City. The latest: https://t.co/3nZlPUUsFA pic.twitter.com/ffwj7wHtz4