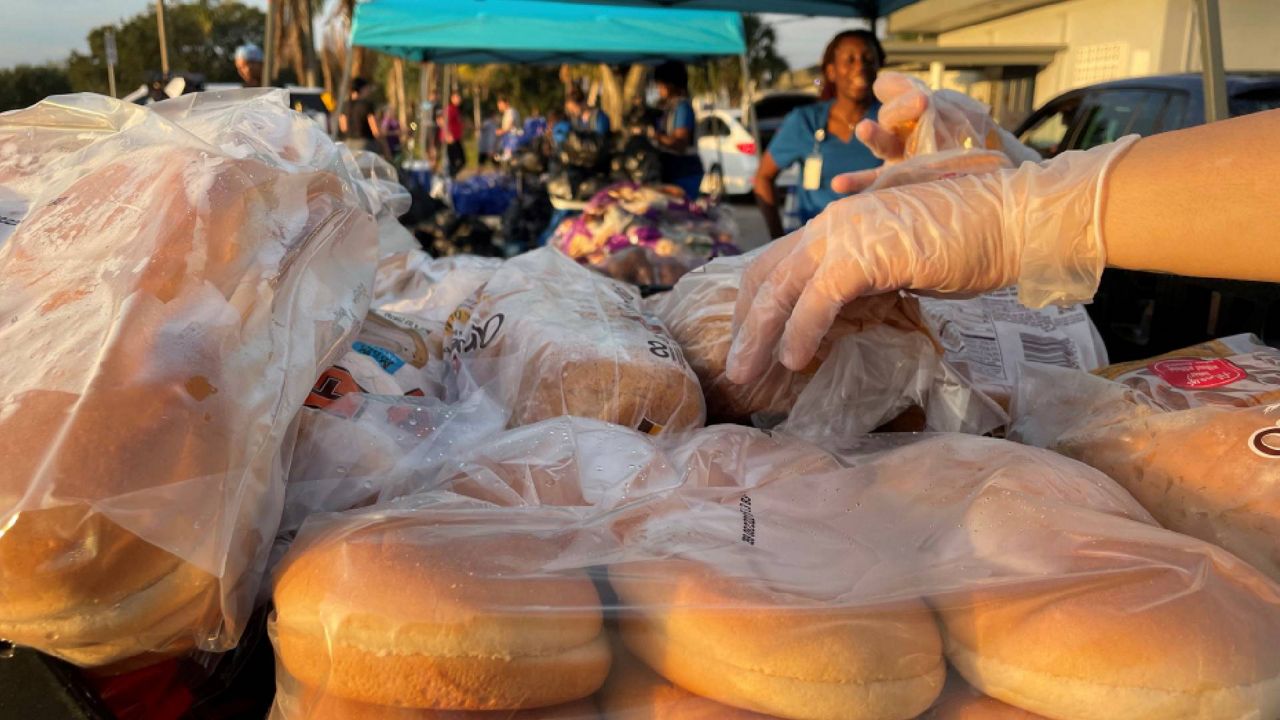 A volunteer reaches for bread to hand out at The Bautista Project’s Service to Service food pantry. (Spectrum News/Sarah Blazonis)

TAMPA, Fla. — On the fourth Wednesday of every month, The Bautista Project's Service to Service drive-thru food pantry offers fresh food to groups in need, including military families.

According to the U.S. Dept. of Defense, its 2020 Status of Forces Survey of Active Duty Members found 24% experienced food insecurity sometime in the year leading up to the survey. Information on the Military Family Advisory Network's website shows one in eight respondents to its 2019 national survey said they were experiencing food insecurity. That rose to one in five in 2021 and improved slightly to one in six this year.

At the latest Service to Service pantry, cars lined up down the street next to Keeney United Methodist Church and stretched around a corner and out of view.

Marla’s husband and nonprofit co-founder, Ulisses Bautisa, said 213 households were served during the October pantry. With the most recent being held the day before Thanksgiving, it was expected that number could be even bigger this time around. That number doesn’t just include military families. Service to Service is also open to veterans, first responders, nurses and utility workers.

Ulisses is an active duty soldier at MacDill Air Force Base, and Marla said the pantry is their way of making life a little easier for local service members. She said their family experienced food insecurity when they first moved to Tampa from Ft. Drum in New York.

“Unfortunately, a lot of times, our housing allowance and our basic wage doesn’t cover our cost of living in certain cities,” said Marla.

In her family’s case, Marla said their housing allowance was $1,600 a month in New York. That rose to $2,100 in Florida, but she said Ulisses was on leave when they moved. That meant they were living in Florida but still getting the New York allowance.

“We had a two-bedroom apartment in South Tampa for our family of five, paying $2,300 a month,” Marla said. “That was not only above our BAH (basic allowance for housing) rate, but it was also above what we would be getting even here. So, we were shelling out about $700 a month plus.”

Marla said because BAH is figured into service members’ basic wage, many military families don’t qualify for SNAP benefits and will turn to food pantries, like Service to Service. It’s called that because, like the Bautistas, the volunteers packing up bags of food and loading cars are veterans, nurses and members of military families.

“When my husband first went into the military, we had three littles, and I had $50 a week for groceries,” said The Bautista Project Chief Marketing Officer Hope Griffin as she filled bags with bananas and salad before the pantry opened.

Griffin said part of the problem is BAH isn’t based on the size of a family.

“So, if you have one person in the family or six people in the family, that’s how much you get, and it doesn’t always increase when you need it to,” Griffin said.

Rhiannon Gonzalez was one of those who came out to the most recent event. Gonzalez said she’s an active duty soldier at MacDill and heard about Service to Service from Ulisses. She told Spectrum Bay News 9 her husband passed away last year due to complications from COVID-19 and pneumonia. Gonzalez said she’s now a single parent and food insecurity has become a reality.

“You just can’t buy the same amount of groceries that you used to be able to with the money that you get paid. This helps offset the costs by giving a little bit of extra food, and every little bit helps,” said Gonzalez.

The Bautista Project partners with Feeding Tampa Bay and Keeney United Methodist on Service to Service. This month, the group Blue Star Families also contributed items. The pantry is held at the church at 7736 Destin Dr. in Tampa from 5 p.m. to 6:30 p.m. on the fourth Wednesday of every month. Participants should bring identification that shows they belong to one of the groups served.