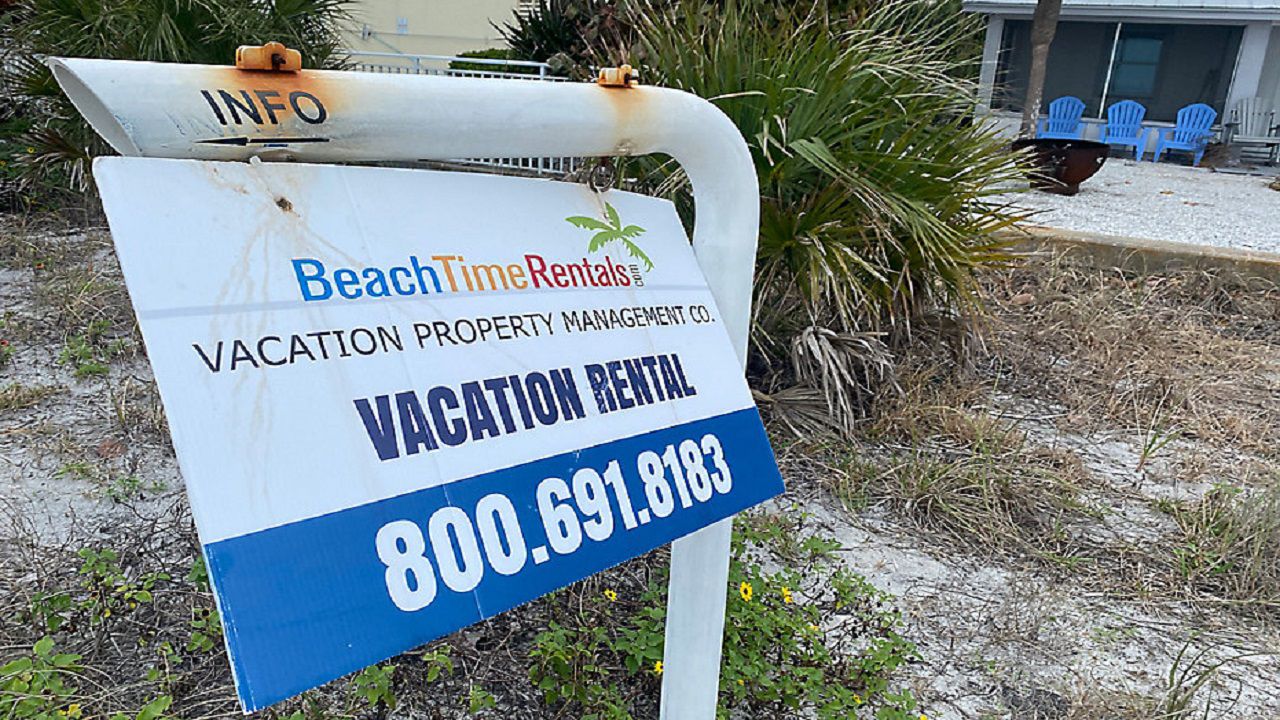 Changes to short-term rentals could come in Indian Rocks Beach

INDIAN ROCKS BEACH, Fla. — Residents and property owners will have their chance to speak in front of city commissioners Tuesday night regarding an influx of short-term rentals and Airbnbs in the beachside city.

Many neighborhood streets in Indian Rocks Beach are peppered with yard signs supporting opposing view points. Some signs read "IRB loves tourists - Our Home is Your Home" while others have "Homes NOT Hotels!" in red capital letters.

John Pfanstiehl has lived in his waterfront Indian Rocks Beach home for more than 30 years and says on just his neighborhood street alone there’s 37 homes that have been converted into short-term rentals.

“If you live in a residential area, do you want a hotel next to you? These short-term rentals are lodging for transients,” he said.

Pfanstiehl says these homes host a revolving door of people and are often over capacity. He says some homes advertise they can sleep more than 10 people despite only having a few bedrooms, which leads to excess noise and a party culture among other issues.

He says with the constant turnover he doesn’t feel safe in his home like he used to.

“Unregulated, unsupervised hotels next to a home where a family is trying to raise children or people chose to retire to is simply wrong,” he said. “It's not a residential neighborhood if you have these businesses trying to bring hundreds of thousands of people in.”

'Lodging for transients' or 'an important part of the state economy?'

The future regulation of short-term rentals is on the table tonight in Indian Rocks Beach. Some homeowners are angry about the 100s of homes that are now airbnbs, but others feel its vital for tourism $ @BN9 pic.twitter.com/iUZP8XaJSz

Pfanstiehl says his ultimate goal is to get Airbnbs and short-term rentals off the city’s residential streets. While that’s beyond the control the city has he’s hoping lawmakers in Tallahassee are watching.

Florida law does not allow local governments to ban short-term rentals entirely but they can pass ordinances to regulate the industry.

“This is a world class tourist destination… and yes, we need to co-exist with folks that come here,” he said.

Hayslett says his properties have the noise ordinance clearly posted and cameras that monitor the noise levels and capacity. If there’s more residents at the home than listed on the rental agreement or any issues reported, he says a staff member will intervene.

“Unfortunately the city has done a poor job enforcing the current ordinances that are in place and if they just did that we would be perfectly fine,” Hayslett said.

He feels that responsible operators shouldn’t be penalized because of a few who don’t follow regulations. His big concern also lies with the tourism industry and the small businesses in the city he loves.

“The tourism that Pinellas County counts on to replenish our beaches to do a lot of things to help our communities, all those tax dollars are at risk now,” he said. “Not to mention the small business owners that are going to be very exposed.”

City commissioners have expressed that they will be looking to make some changes to the rules for short-term rentals. Those changes could include adding registrations fees, occupancy limits or mandating inspections. They will hear from residents and speak about what changes they wish to consider during Tuesday night’s meeting.

The meeting is set to begin at 5 p.m. in the Indian Rocks Beach City Hall Auditorium located at 1507 Bay Palm Boulevard.

It is also available on zoom using this information