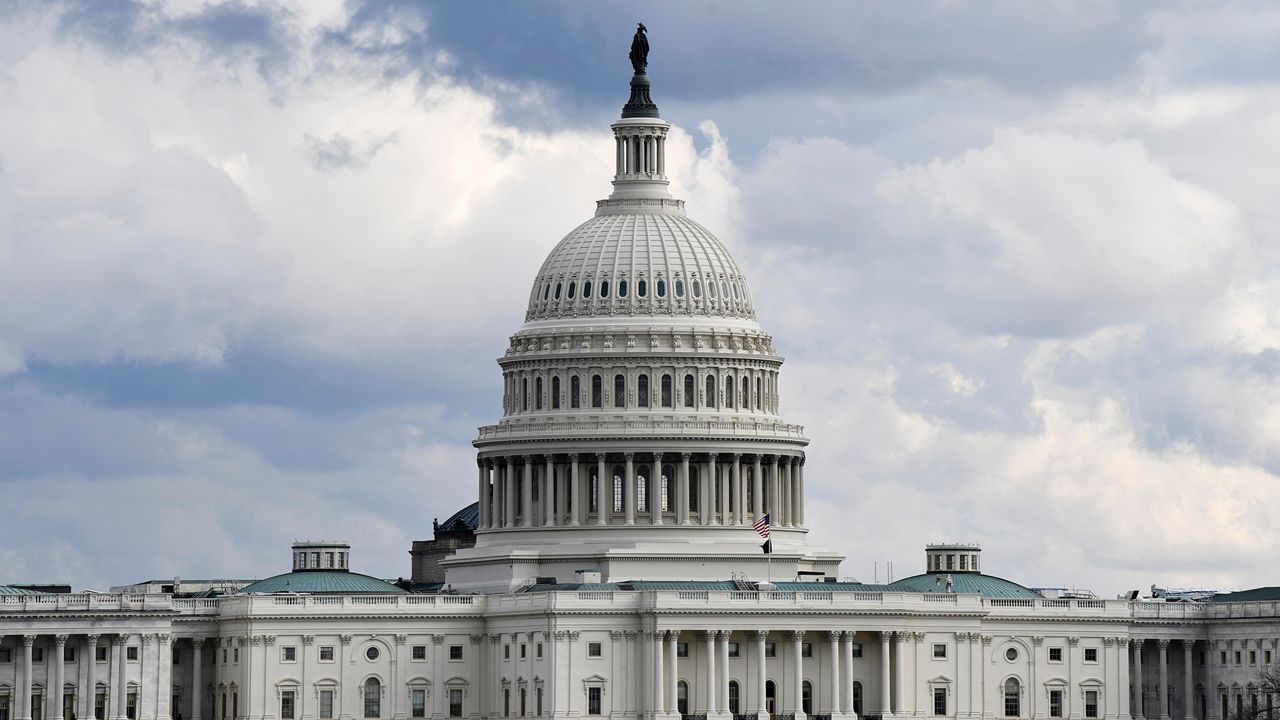 
The final vote on the bill, known as the Infrastructure Investment and Jobs Act of 2021, was 69-30, with 19 Republicans joining all 50 Democratic Senators to support the bill. Vice President Kamala Harris presided over the Senate as the bill passed.

The Bipartisan Infrastructure Deal has passed the Senate. This is a historic deal for the American people. pic.twitter.com/VrJcZeIWy2

The bipartisan bill, which now heads to the House of Representatives for consideration, includes $550 billion in new spending and focuses on “hard” infrastructure projects, like roads, bridges, airports, clean water and electric vehicles.

"It’s been a long and winding road, but we have persisted and now we have arrived," Senate Majority Leader Chuck Schumer, D-N.Y., said on the Senate floor before the vote. "There were many logs in our path, detours along the way, but the American people will now see the most robust injection of funds into infrastructure in decades."

"It's been a long time coming," he added.

BIG NEWS: The Senate just passed the first major infrastructure package for our country in over a decade!

It will revitalize America's infrastructure & give people, businesses & our economy the tools to succeed in the 21st century

All told, the bill will provide:

The Bipartisan Infrastructure Deal will grow the economy, create good-paying jobs, and set America on a path to win the future. https://t.co/VfIFY5SjTb

According to the White House, the spending in the bill represents:

"Thankful to everyone who helped to deliver today's landmark Senate vote on the Bipartisan Infrastructure Deal," Transportation Secretary Pete Buttigieg, a key negotiator for the Biden administration, wrote on Twitter. "We are one big step closer to a historic investment not just in our infrastructure, but in our future."

Thankful to everyone who helped to deliver today's landmark Senate vote on the Bipartisan Infrastructure Deal. We are one big step closer to a historic investment not just in our infrastructure, but in our future.

"For more than a generation, funding for crucial national priorities like infrastructure has been on a downward trajectory, harming workers and businesses alike," Treasury Secretary Janet Yellen said in a statement. "During the pandemic, we saw how a broadband network that was not accessible for millions of Americans made it more challenging for businesses to operate and workers to perform their jobs remotely. Now after many years, this trend of underinvestment is being reversed."

The bipartisan bill will be funded largely by repurposing other money, including unused COVID-19 relief funds, as well as other revenue streams and spending cuts. An analysis from the Congressional Budget Office said it could add $256 billion to projected deficits over the next decade.

"It's important to understand what this bill is and what it isn’t," Secretary Yellen continued. "It is not a stimulus package like the American Rescue Plan, intended to help people weather a crisis. Instead, this bill is designed to do the hard, generational work of building a stronger, more structurally sound economy with smart investments in the future."

The bill received widespread bipartisan support — a rarity in a deeply divided Washington, but represents the kind of spirit of compromise that President Biden championed as a senator and during his successful presidential campaign.

Despite some opposition — including the objections of some Republicans about the bill’s size, scope and financing, progressive Democrats arguing it does not go far enough and even repeated attempts from former President Donald Trump to kill the bill — the centrist core held together toward final passage.

Trump tried and failed to get an infrastructure bill passed during his single term in the White House, like several presidents before him.

“Every president in the modern era has proposed an infrastructure package,” Utah Sen. Mitt Romney, a key Republican infrastructure negotiator and the GOP’s 2012 presidential nominee, said. “This was an effort to say ‘Let’s break the logjam.’"

Passage of the bill serves as a major victory for President Biden, as well as Senate Democrats led by Majority Leader Chuck Schumer.

"President Biden has been in office for only seven months and already the Senate is about to pass the first major infrastructure package in over a decade on a bipartisan basis with his complete and total involvement," Schumer said in praise of the president.

Following the vote, Leader Schumer immediately moved on to the chamber’s next challenge: A $3.5 trillion budget package which contains funding for a number of President Biden’s domestic priorities, including climate, immigration, social programs and health care.

"Once this bill is complete, the Senate will immediately turn to the second track in our two tracks strategy, passing a budget resolution that will unlock historic investments in American jobs, American families and the fight against climate change," Schumer said ahead of the bipartisan infrastructure bill passing.

"The two-track strategy is proceeding full steam ahead," he added.

The Senate voted 50-49 to begin debate on the measure Tuesday.

"At the core of what we want to do is this: We want to cut taxes for American families," Schumer continued. "We want to create millions of jobs while tackling the climate crisis. And we want to pay for it by making corporation and the wealthy finally pay their fair share."

The budget measure, which was released Monday, includes funding for:

The budget bill does not need Republican support to pass using the budget reconciliation process, and will likely not receive any support beyond Democrats.

The package would be funded by higher taxes on the wealthy and corporations.

The Democratic budget is about:

We're working to get it done.

"We have critical investments in the future that we must still address in reconciliation," Secretary Yellen said in a statement. "Because if we truly want to build a stronger economy, we must invest not just in infrastructure, but in other public goods like childcare, education, and affordable housing. I look forward to working with Congress to ensure that today’s economic step forward soon has a sequel."

The House is expected to consider both measures when it returns from recess in September. House Speaker Nancy Pelosi has pledged to consider both bills at the same time, setting up a particularly tricky tightrope for the California Democrat to walk.

On one hand, progressives are adamant that both bills be considered simultaneously.

“It’s not a bipartisan infrastructure bill OR a bold jobs and families package. It’s BOTH,” wrote Rep. Pramila Jayapal (D-Cali.), the Progressive Caucus Chair, wrote on Twitter. “If the bipartisan bill isn’t passed with a reconciliation package that has our popular priorities, we’re not voting for it.”

On the other, centrist House Democrats urged Pelosi in a letter to consider the bipartisan infrastructure measure quickly.

As soon as the Senate completes its work, we must bring this bipartisan infrastructure bill to the House floor for a standalone vote,” the group of moderates, which includes Reps. Josh Gottheimer, D-N.J., Jared Golden, D-Maine, and Kurt Schrader, D-Ore., wrote. “This once-in-a-century investment deserves its own consideration, without regard to other legislation.”

President Biden "remains committed to passing each of these pieces of legislation on dual tracks that he is going to work in lockstep with Speaker Pelosi," White House press secretary Jen Psaki said Tuesday.

On passing both pieces of the president's domestic agenda, @PressSec says: "His message is that he remains committed to passing each of these pieces of legislation on dual tracks that he is going to work in lockstep with Speaker Pelosi."

Speaker Pelosi, for her part, praised the passage of the bill in a statement.

"Today is a day of progress, as the Senate has passed the bipartisan infrastructure package and paved the way for not only rebuilding but reimagining our infrastructure for the 21st Century Economy," Pelosi wrote.

The House will continue to work with the Senate to ensure that our priorities For The People are included in the final infrastructure and reconciliation packages, in a way that is resilient and will #BuildBackBetter. Read my full statement here: https://t.co/Cgzhep3Qei

"The leadership of President Biden has seized this once-in-a-century opportunity to Build Back Better for our country," the California Democrat continued. "This bipartisan package helps rebuild the middle class as it rebuilds our infrastructure – creating good-paying American jobs and turbocharging American competitiveness and growth."

"The House will continue to work with the Senate to ensure that our priorities For The People are included in the final infrastructure and reconciliation packages, in a way that is resilient and will Build Back Better," Pelosi pledged.

Florida Rep. Val Demings, a prominent House Democrat who is running for U.S. Senate in 2022, said on Twitter that she supports the bill.

I’m glad that Democrats and Republicans were able to come together to address our pressing infrastructure needs.

This investment means thousands of good jobs and real progress to improve the lives of Floridians. When we work together, our communities win.

I support this bill.

"I’m glad that Democrats and Republicans were able to come together to address our pressing infrastructure needs, Demings wrote. "This investment means thousands of good jobs and real progress to improve the lives of Floridians. When we work together, our communities win."

The House returns from recess on Sept. 20.