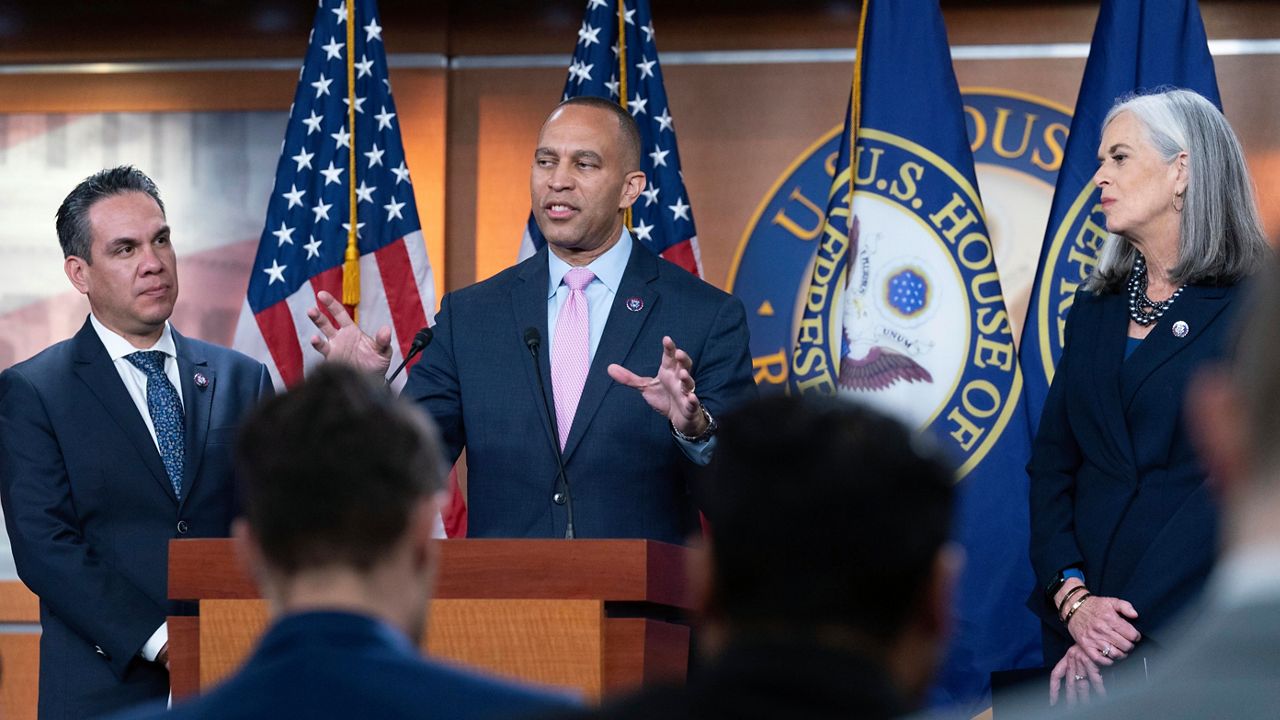 Rep. Hakeem Jeffries, D-N.Y., joined by Rep. Katherine Clark, D-Mass., left, and Rep. Pete Aguilar, D-Calif., speaks to reporters after they were elected by House Democrats to form the new leadership when Speaker of the House Nancy Pelosi, D-Calif., steps aside in the new Congress under the Republican majority, at the Capitol in Washington, Wednesday, Nov. 30, 2022. (AP Photo/Jose Luis Magana)

House Democrats ushered in a new era of leadership Wednesday, electing a trio of fresh faces to its top posts.

At a caucus meeting on Capitol Hill, Democrats unanimously elected Rep. Hakeem Jeffries of New York as their new House leader. He will succeed Nancy Pelosi, who announced earlier this month she is stepping down as leader after directing the party for 20 years, including eight as speaker.

Jeffries will make history as the first Black lawmaker to lead a party in Congress.

House Democrats also elected Rep. Katherine Clark of Massachusetts, currently the assistant speaker, as whip and Rep. Pete Aguilar of California as caucus chair. Aguilar  has served since January 2021 as the vice chair under Jeffries.

Together, they will guide the minority party beginning in January after Republicans regained control of the House in the midterm election.

Jeffries said during a news conference after the vote that he will seek to work with the GOP “wherever possible.”

“Our commitment is always to extend the hand of partnership whenever and wherever possible in order to get things done for everyday Americans,” he said. “ … That's been our track record.”

But Jeffries and Aguilar also made clear House Democrats plan to push back on right-wing extremism in the new Congress.

“We heard loud and clear this election from the American public that they want us to work to get things done for them,” Aguilar said. “They want us to reduce the costs that they have and they want us to stamp out extremism in every form. And so that's going to be our mandate.”

Hoyer has held the party’s No. 2 House role — majority leader when Democrats controlled the chamber and whip when they didn’t — since 2003.

With the transition, the average age of the top three House Democrats falls more than 30 years. Pelosi and Clyburn are each 82, and Hoyer is 83. Meanwhile, Jeffries is 52, Clark is 57, and Aguilar is 43.

The incoming Democratic leaders — one Black, one female and one Latino — also stressed their diversity.

“We as a team and as a caucus reflect the diversity and the strength of the American people,” Clark said. “And that is where we are able to come together around shared values and reflect back to American families that they are the priority.”

Aguilar said it’s “not lost on me what my election means for for my community, for the Latino community.”

On Thursday, Clyburn was elected assistant leader in the new Congress, a position he previously held from 2011-19. The longtime leader faced a challenge from Rhode Island Rep. David Cicilline, who rose to prominence as one of the impeachment managers in the second impeachment trial of former President Donald Trump.

Cicilline, who is openly gay, emphasized the importance of having a member of the LGBTQ+ community serve in leadership.

"With so much at stake, I think it is critical that the House Democratic Leadership team fully reflect the diversity of our caucus and the American people by including an LGBTQ+ member at the leadership table, which is why I’ve decided to run for Assistant Leader," he said in a statement.

Cicilline withdrew from the race on Thursday, leaving Clyburn unopposed for the role.

The House Democratic Steering and Policy Committee unanimously voted Tuesday night to designate Pelosi, who is continuing to serve as a congresswoman, as “speaker emerita.”

“Congratulations to Leader-designate Hakeem Jeffries, Whip-designate Katherine Clark and Chairman-designate Pete Aguilar!" Pelosi wrote in a statement following Wednesday’s vote. "Together, this new generation of leaders reflects the vibrancy and diversity of our great nation – and they will reinvigorate our Caucus with their new energy, ideas and perspective. Now, with the fullest confidence of our Members, our new Leaders are well-prepared to carry on Democrats’ fight for working families and defense of Democracy.

“I am grateful to have served in the leadership of the magnificent House Democrats," she added. "I look forward to an orderly transition as we prepare for the 118th Congress.”

A former state assemblyman and corporate lawyer, Jeffries has served in the House since 2013. The Brooklyn native ran unopposed for House minority leader.

Not only will Jeffries be tasked with navigating through a Republican majority, he will also have to manage disputes among the factions in his own party.

He said that those differing views are not a negative.

“That's what makes the House Democratic caucus the most authentic representatives of the American people. Sometimes we can have noisy conversations, but as we’ve shown time and time again on issue after issue after issue, at the end of the day, we always come together, find the highest common denominator and get big things done.”

Jeffries paid tribute to Pelosi, Hoyer and Clyburn, saying, “We stand on their collective broad shoulders, building upon the incredible work that they’ve done.”

He added that his earliest memories of Congress as a child were of Rep. Shirley Chisholm, the first Black woman elected to Congress and who represented some of the same Brooklyn neighborhoods he does. Jeffries noted that Wednesday would have been Chisholm’s 98th birthday.

“I stand on the shoulders of people like Shirley Chisholm and so many others as we work to advance the ball for everyday Americans and get stuff done,” he said.

A former Massachusetts state lawmaker, Clark also was elected to Congress in 2013. She served as caucus vice chair from 2019-21 before being elevated to assistant speaker.

Aguilar, who was mayor of Redlands, California, was first elected to the House in 2015.