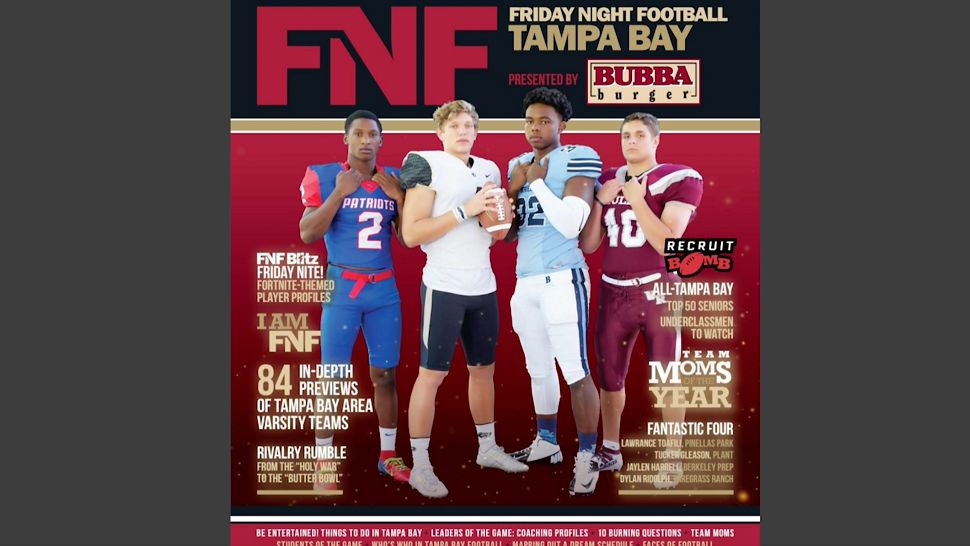 ST. PETERSBURG, Fla. - “You see a whole bunch of famous people on the cover and stuff like that. It’s crazy to see yourself on the cover," said Lawrance Toafili of Pinellas Park High School.
Lawrence Toafili is a 4-star senior running back prospect. He is among the most coveted offensive players in the 2020 recruiting class.  Yet making the cover of Friday Night Football Magazine has been a summer highlight for Toafili and his family.
I got to see when they saw it. I think they were more excited than I was,” said Toafili
Since 2009, FNF Magazine has put out a statewide high school football season preview. But this year its focus changed to one area – Tampa Bay. It was an easy transition for managing editor Corey Long, who grew up in Polk County.
“We live here, it’s an area that I am very familiar with and the idea is that we know the coaches and we know the players," said Long. "It’s going to be a great showcase for them and I’m really excited for this one more than any project like this that I have done in a long time.”
Long has covered high school football and college recruiting in the Bay Area since 1996. The magazine has become a true labor of love for Long, who enjoyed seeing players and teams feel like they’ve reached the big time with the football magazine in the area.
“You want the coaches and the fans of the players to think that in late July ‘FNF Tampa Bay’ is going to come out and that is where we are going to get much of our information from,” Long said.
The process begins in February reaching out to programs for player profiles and feature stories.It’s a grind for Long and his team of writers and photographers. One that doesn’t end until the finished product arrives.
It always feels like Christmas and I’m excited to show it to anybody," said Long. "Like, right away I am thinking ‘ok, who can I show this to?’”
On this particular day, we followed Long to Pinellas Park high school to present the magazine to one of its cover boys – Lawrence Toafili who noticed a number of his friends also making it into the magazine.
“It’s nice to see them in their, too, because I like to see my friends and everyone I know succeed and see everybody doing good,” said Toafili. "I think if we had three or four main schools in the Pinellas County area we would never lose. I really like our talent and I am happy we are being recognized."
And that’s what it’s all about for Corey Long: putting the spotlight on different players from different Bay Area communities in hopes of connecting them all through FNF Magazine.
"They are the people we want to grow and live here and continue to make the place we live a better place. So, we should always be investing in our community and it starts with students, with student-athletes in high school,” said Long.