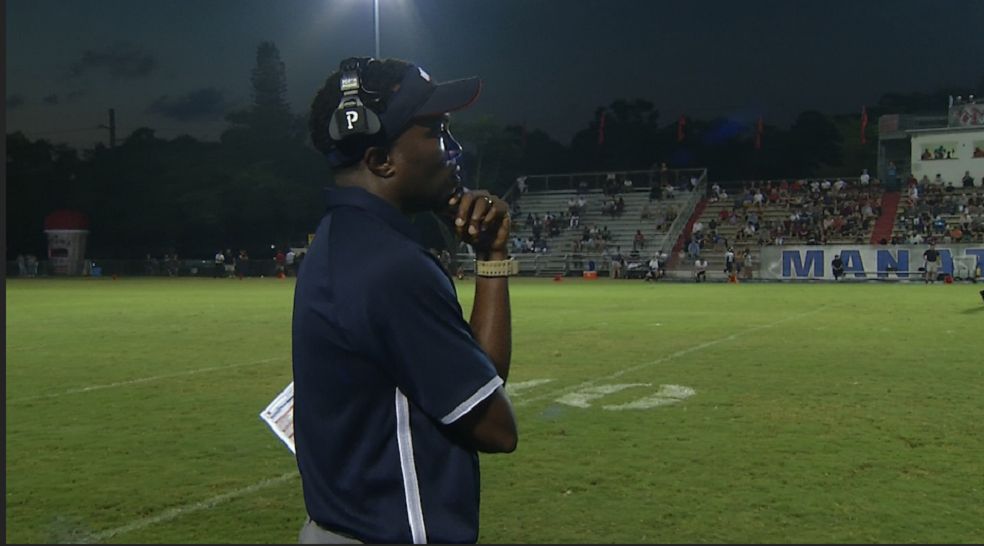 Jacquez Green has brought the Fun-N-Gun to Manatee.

Former Florida Gators Great Green Is A Go At Manatee

Manatee players had no idea.

No idea they were surrounded by greatness.

Then they saw the tape.

"I was like, whoa, he’s very electrifying," senior running back Napoleon Harris said.

"The kids like, that’s coach for real? And I was like, yeah that’s him," Shakir said. "Cause he really doesn’t talk about anything really."

Green’s play did all the talking. He produced at the highest level from high school to the college ranks to the pros. At the University of Florida, he was a human highlight reel. With the Tampa Bay Bucs, his speed separated him from the pack.

"When I first started coaching, I had a knack for knowing how to get guys open in passing game. I think that came from playing with Coach Spurrier all those years," Green said. "The time I went to camp with Coach Gruden, I learned about the West Coach offense."

Coach Green is sharing that offensive wisdom at Manatee, rejoining forces with Shakir. The duo were together at Lincoln and Gibbs and in Shakir’s third year as the Canes head coach, Green was finally able to join him.

Green’s arrival at Manatee has done more than rejuvenate the offense. It has provided the Canes with a new outlook.

"They can see the opportunity," Shakir said. "They can see his success and from what he came from. You know, small town in Fort Valley, Georgia, Peach County. So, smaller than here."

Green’s impressive resume brings him street cred with the players. But it’s his off the field background that resonates more.

"I grew up like a lot of these kids," he said. "I grew up in a single mom household, Section 8 housing right across the street from the projects. So, I grew up with nothing, understood what hard work can bring you, how it can change your family dynamics."

Now he's trying to help the Manatee players on their journey.