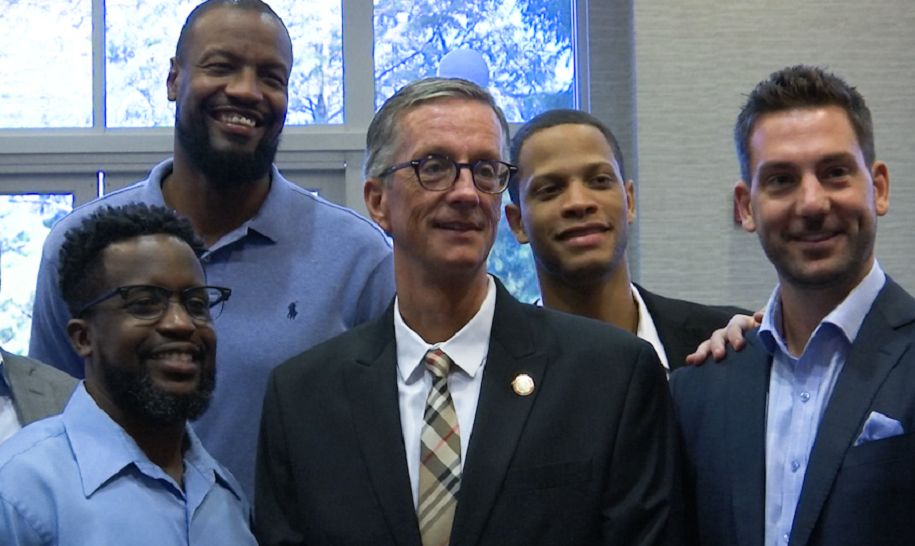 Coach Joe Fenlon was surrounded by friends, family and former players as he was inducted into the FHSAA Hall of Fame.

GAINESVILLE, Fla. - Joe Fenlon took the stage to the strains of Tim McGraw’s Humble and Kind.

The appropriate lyric, let yourself feel the pride, but always stay humble and kind.

"He’s so humble, but he has a lot to be proud of tonight," Tampa Prep Head of School Kevin Plummer said.

The best of the best from the state of Florida gathered for the FHSAA Class of 2019 Hall of Fame induction ceremony. Tampa Prep boys basketball coach Joe Fenlon was right in the middle.

"It’s a night that is very flattering, and yet so humble at the same time," Fenlon said.

"He’s got a genuine love for kids," Plummer said. "It comes from the heart and the soul. It’s informed by the head, he’s incredibly intelligent, but he has a genuine passion for young people."

That passion is on display any time Tampa Prep takes the court. And that passion produces results. A state championship in 2012. Nearly 800 wins, making him the winningest boys basketball coach in the Bay Area. Clearly, a Hall of Fame resume.

"Never in my wildest dreams did I expect 37 years ago when I started at Tampa Prep that I would be standing here in Gainesville, FL getting ready to be inducted into a Hall of Fame," Fenlon said. "It’s almost unimaginable."

But it’s not the accolades that brings Fenlon back season after season.

"It’s the kids," he said. "It’s the kids and every team is different. At a lot of work places, you get the same thing, day after day, year after year, and I don’t get that."

Fenlon’s consistently produced Division I talent, including the 1999 Florida Mr. Basketball Casey Sanders, one of many former players who showed up at the Hall of Fame dinner to support their coach. Fenlon said he’s nothing without his players, including the ones just getting into the sport.

"Those kids who trusted and believed that something great could happen," Fenlon said. "And I had some kids really early on that could have gone somewhere else and they stuck with us.

As he stood on the Hall of Fame stage accepting his award, coach Fenlon deflected, crediting everyone else for his success. Once again humble and kind.

"He has been an amazing basketball coach, but that’s a given," Plummer said. "He’s an even better person. If there was a Hall of Fame for people, he’d been in it as well."

One Hall of Fame at a time. For now, Coach Fenlon’s got a season to prepare for and it’s his favorite time of the year.

"Each year, I have another opportunity to create a new identity with a new group of kids," Fenlon said. "Even though some return, there’s always someone who it’s their first time. It’s all new, it’s fresh and when you have kids who have that kind of energy and that type of excitement, you can’t help but be excited for them."