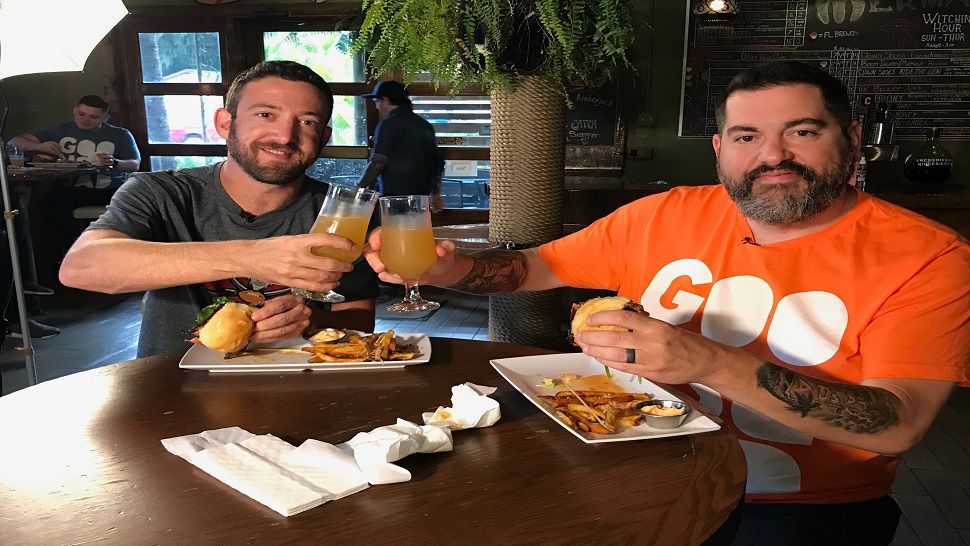 The creators of “The Pat and Aaaron Show” on 95.3 DAE pride themselves on connecting with the “regular John and Jane” Tampa sports fan during the midday. They’ve dubbed their loyal listeners “The Goon Squad.”

“Some people think ‘ oh, you’re a radio guy, let me hear your radio voice’,” joked Jacobson. “No, our radio show is hanging out on the coach, guys and girls watching sports.”

The show’s popularity has led to opportunities to grow the brand. Last fall a Goon Squad IPA was created at Brew Hub in Lakeland. It has become one of the highest-rated beers in the company’s 5-year history.

“Realistically, it’s about 3 Bud Lights worth of a beer,” said Brew Hub head brewer Chris Schoen. “So, it’s for all those goons out there that want to drink less but get more.”

“Goon Squad was our number one,” said Brew Hub assistant general manager Joe Martinez. “I am telling you people would call ‘hey do you have Goon Squad?’ No. ‘Come on man when are you putting it on again!?”

Pat and Aaron didn’t stop there. Recently, the Mermaid Tavern in Tampa added a new burger to the menu. Its name…you guessed it…The Goon Squad Burger.

Shawn Castillo is a fan of Pat and Aaron and created this burger featuring the Goon Squad IPA as a batter for pickled jalapenos.

“The nice tart flavor of the jalapenos pairs well with the Goon Squad,” Castillo said. The burger also includes a grass-fed patty and bacon, as well as a house aioli.

Add in Pat and Aaaron’s legion of fans and the Goon Squad burger is a smash hit!

“It’s pretty much outselling most of the products that we have on our menu right now,” said Mermaid Tavern GM Juan Ruju. “It’s decadent and rich and it’s amazing.”

With so much hype for the beer and the burger, I met up with Pat and Aaron to dive into the world of the Goon Squad.

Chris Torello: The conversation, plus the food, plus the drink – that’s the Pat and Aaron Show.

Chris Torello: To have the Tampa community embrace you guys and to really have businesses embrace you, that’s got to be the ultimate compliment.

A good burger, a good beer; and good conversation: Pat and Aaron are a hit across the board in their quest to truly represent the everyday people of Tampa.