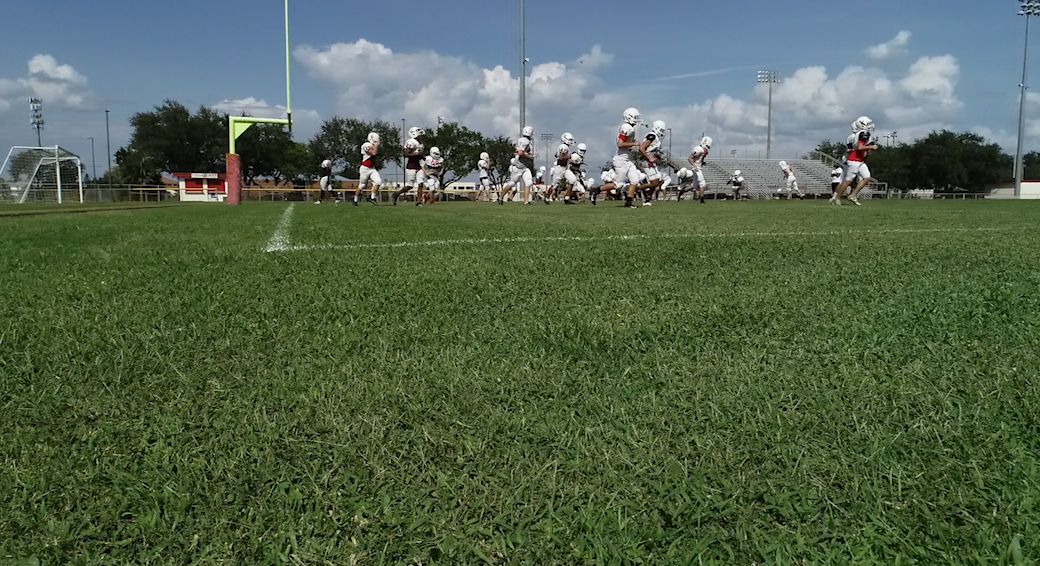 Northeast High football players have perfected the art of getting up.

Wins, and Especially Losses, Have a Greater Meaning for the Northeast Vikings Football Team

Get knocked down? Get up.

That’s the Northeast High football way. These players get knocked down a lot. And they’ve perfected the art of getting up. Covid-19’s the latest stumbling block pushing these Vikings around.

The pandemic’s presented numerous challenges just to field a team week in and week out. Northeast has battled a rash of injuries, including several broken legs, making this most improbable season nearly impossible.

“If you sit back at how a team looked Week 7 last year and how a team looks Week 7 this year, it’s like night and day,” head coach Jeremy Frioud said.

But they get up. It’s a phrase Frioud says often. It’s what he repeatedly heard in his head last year when tragedy struck his team.

“Hardest thing I’ve ever had to do,” Frioud said. “Still is.”

It’s been a year since Northeast lost a member of their family. But the tears flow just as hard as the day it happened.

Jacquez Welch was a Northeast captain, playing in a game against Osceola when he went down. And he never got back up. A rare brain condition that could have struck him dead at any time, any place, struck him on the football field. It was a moment his teammates will never forget.

“I’m playing every game like its my last,” senior fullback/linebacker Luke Compton said.

Jacquez is everywhere at Northeast. He’s on the stadium wall. He’s on t-shirts. He’s on Coach Frioud’s leg.

“That was his second to last play,” Frioud said pointing to the tattoo on his leg. “That was his touchdown that he scored the play before he went down.”

He may not physically be on the field with his teammates, but Jacquez is still contributing to this football team.

“His spirit is here,” Compton said. “His energy and his, like, positivity and like his mentality is just living within us.”

Everywhere the Vikings go, a little piece of Jacquez goes with them, right inside Coach Frioud’s pocket. That’s where he keeps the former Northeast captain’s mouthpiece. It’s one of the many ways Frioud’s coped. Just what he taught his players to do - to go on.

“Together, we just did it together,” Compton said. “We got through it day by day. It was rough, but just with sticking together.”

That’s what football teaches them. It’s a true brotherhood made up of players from a variety of diverse backgrounds who bond together to play a game they love.

“You have to depend on your teammates in football, more so than any other sport,” Frioud said.

They learned that lesson last year and are carrying it over to this season. With a little help from their former teammate.

“We’ve been trying to keep the Welch mentality and fight until the very end and be strong,” Compton said.

Get up. It’s what you do if you’re a Northeast Viking. Get knocked down, get right back up.