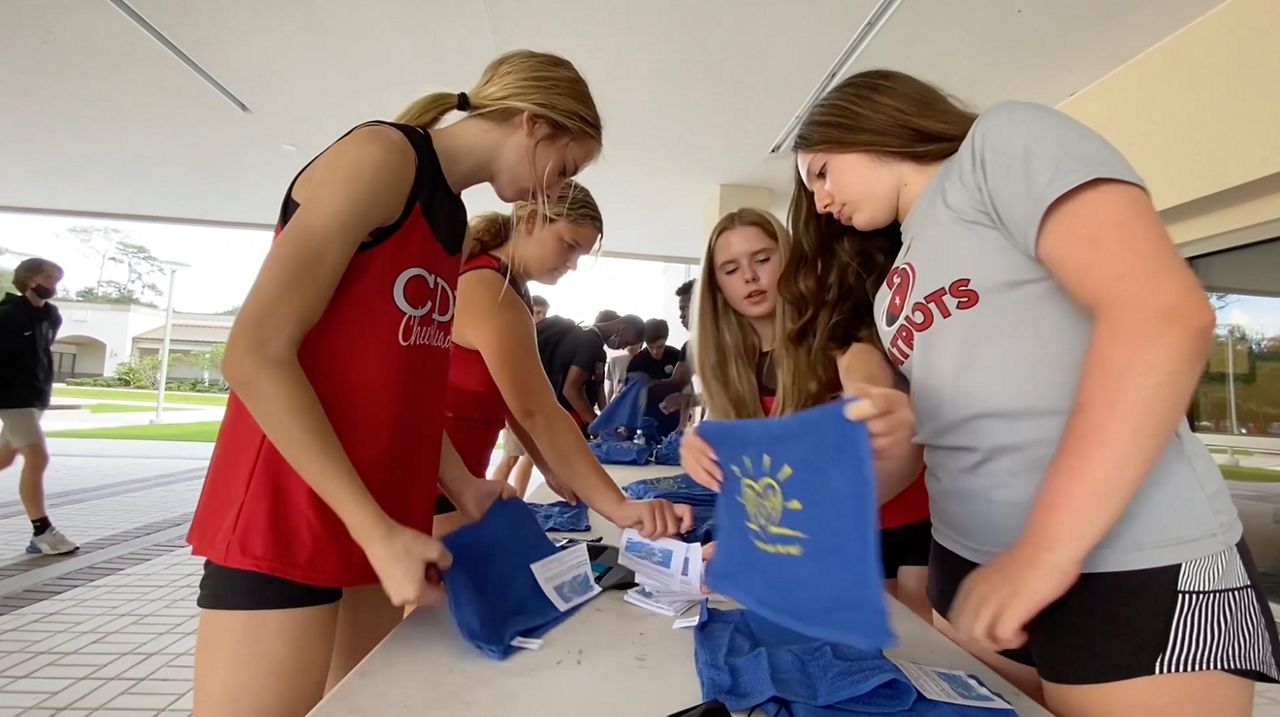 TAMPA, FL - The Carrollwood Day School cheerleaders are hard at work. They’re preparing their routine for the Senior Night football game against Seffner Christian. But they’re also working on something else.

They’ve organized a See Us Now event. It’s to bring awareness, and give a voice, to the some 22,000 children currently in Florida’s foster care system.

“They’re not seen and that’s why it’s See Us Now,” said freshman cheerleader Brooke Bergin. “We can see them and we can know they’re heard.”

The cheerleaders learned that half of all children in foster care go to bed malnourished or end up uneducated. It’s also highly likely that some will end up as victims of childhood sex trafficking.

“I feel like everyone in the CDS community, when a problem is brought to us, I feel like we have a great sense of community that words spreads fast when there is a problem and we all want to help,” said freshman cheerleader Audrey Royer.

The cheerleaders have put blue towels and note cards together to hand out at the game. Blue is the color of foster awareness.

“We’re planning on everyone wearing blue and waving the blue towels,” said freshman cheerleader Charissa Wagner, who is one of the event’s organizers. “The cheerleaders will wear blue bows or ribbons.”

The cheerleaders also have fliers filled with information that they want to get around campus. The goal is to make sure everyone shows up to the game in blue.

“It’s amazing,” said freshman Alexis Newman, who is part of CDS Acteens. “I didn’t know that many people would care about it. We have gotten so much support from the head of our high school, and the head of our school. Everybody wants to help out, which is great.”

After handing out fliers and speaking with different members of the CDS community the cheerleaders knew there was still one more big piece of Friday night football.

That would be the actual team. So the cheerleaders met with head coach Marshal McDuffie. He and his players were all in.

With everything in place it is time for game night.  And with the players and cheerleaders preparing for the game, its up to parents to continue raising awareness.

“Everybody seems to want to know more and they all have a personal story,” said Kari Wagner, mom to Charissa. “So, it’s been great talking to people about the initiative and watching the kids work so hard and come up with all these great ideas to bring attention to the cause.”

The football team kept its promise with most players wearing some type of blue.

“It’s really good right now,” said sophomore defensive back Tavoy Feagin. “We have so much going on right now so it’s really great to see both teams come together to make a change.”

With most of the fans in the stands wearing blue it’s a most to take in all that was accomplished in a short period of time. But for the CDS cheerleaders their mission is nowhere near done. They intend to push forward and continue to bring voices to children in foster care.

“This is just the start of it all,” said Royer. “This was to get people hyped up, but we’re going to go a lot farther than this.”