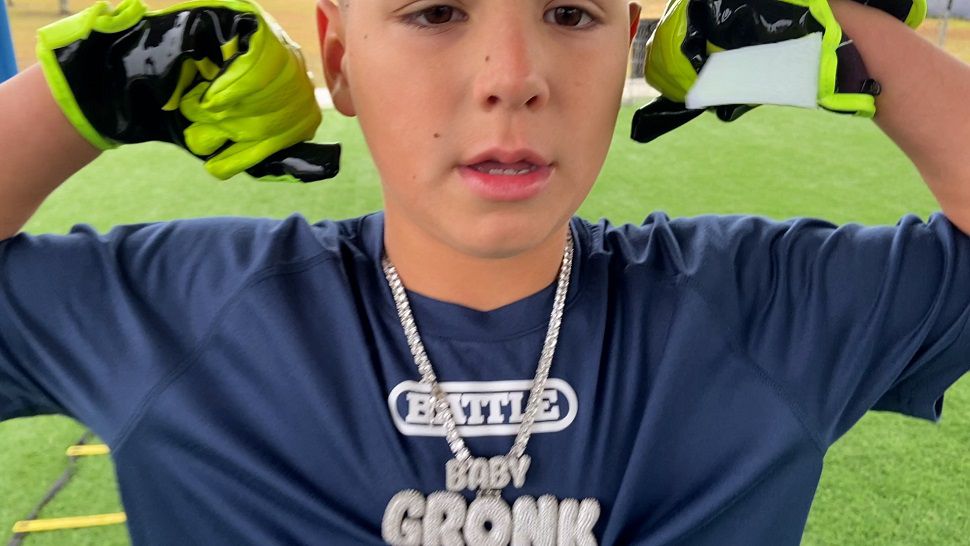 The Legend of Baby Gronk

Eight-year old Madden San Miguel, a third grader from Dallas has a national following that would make most professional athletes jealous.

Young Madden mugs for the camera after a catch, yelling out, "I'm the number one third grader in America"

Baylin Trujllio has been training young athletes for a living for the past seven years and in that time he’s worked with hundreds of kids of all ages.

This morning, the former college quarterbacks student is unlike any he has ever had.

Baylin Says "When I saw him in person and actually go thru a workout, the kid is the real deal".

Madden,aka Baby Gronk stands four-foot nine, 100-pounds and has an Instagram page with over two-hundred and 50-thousand followers.

The account was created three years ago by Madden’s father Jake, who runs it and posts content of his son daily.

What he build was an Internet Superstar, people couldn’t get enough of the kid known as Baby Gronk who would tower over kids his age and go out and dominate them on the football field.

Jake says a lot of people may think that he is living thru Madden, but what he is trying to do is give his son a better life.

Jake's Grandfather went to prison for murder, his dad was in and out of jail as well, as Jake points outs it, "I am trying to break the family curse"

Baylin Trujillo is a former college quarterback and says a lot of kids get overlooked and social media is a way to get your talents out there and get them in front of the right people, Jake and his son Madden have become among the best at doing that at a young age.

As Madden's social media accounts grew so did the popularity of Baby Gronk, taking unofficial visits to schools like the University of Florida and Texas where he would get on the field for workouts, he even committed to play football at the university of Oregon when he was in just the second grade.

Madden has already signed endorsement deals and hung out with NFL stars, Rappers and even Miss Florida.

Jake says his goal for his son, is simple,"The Main thing for me, is build his platform up, save as much money as I can for him so if sports doesn’t work out, then he can but some land, own a few companies, he can be pretty good off  as an adult".

Although Madden has never met Rob Gronkowski there is a meeting in the works.

Madden has grown his social media platform threw viral videos like when he pulled a pickup truck with a rope, it got more then 20-million views.

Despite all the bright lights, and Internet fame young Madden has enjoyed, behind it all, he’s just a happy, grounded, well adjusted eight year old who spends his time out of the spotlight doing what any kid his age would do.

He loves playing Madden and playing baseball or toys with his sister.

His mission in Tampa was complete, Madden came to town to play for an 8-U National Flag Football Championship. His team from Frisco, Texas went a perfect six and oh and won their age group.

The legend continues to grow!