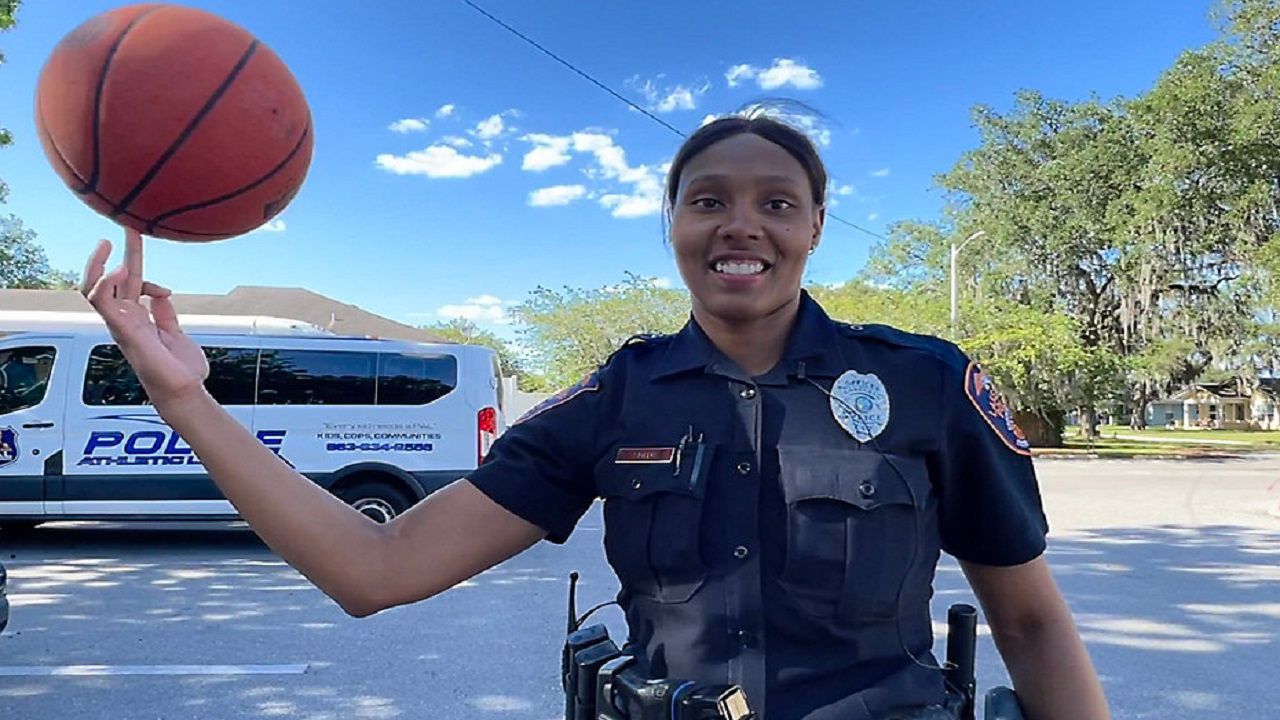 Lakeland officer Andrea Smith is a former high school and college basketball standout. She went to Lake Gibson, won a JUCO national title, and was then a star player for USF before being drafted into the WNBA. (Chris Torello, Spectrum News staff)

LAKELAND, FL - As long as Andrea Smith can remember, she’s always wanted to be a police officer.

“That was a dream of mine I had when I was younger,” said Smith, who has been on the force for almost three years. “I just always wanted to do something where I was protecting or serving or I was helping.”

She gets to protect and serve the very streets she grew up on, in Lakeland.

“It’s neat. It’s a neat, neat feeling I get being home,” said Smith, who regularly sees family while driving the streets of Lakeland. “Working where you grew up, it just comes full circle for me because what better way to serve than where you’re from.”

One of the things Andrea loves to do is interact with the young people of Lakeland.

On a recent call she was talking to a group of teens playing basketball. One of the kids challenged her to a game of 1-on-1. And that is when a different side of Officer Smith came out. The video went viral.

The boys, and social media, found out Smith is one of the best basketball players Lakeland has produced. Smith got her start on the basketball court at the Lakeland Police Athletic League.

“We were seven or eight, my dad kind of put us in the PAL program just so we could be active,” said Smith.

TONIGHT on @SpecSports360 - A @LakelandPD officer was on a call. A teen asked her to play a game of 1-on-1.

What the teen didn't know was he was facing Andrea Smith - a former @USFWBB player.

The video went viral and inspired a community.

It didn’t take long to see that Andrea was a natural.

“As I got to high school I realized that I had some type of talent,” said Smith. “Something that was good enough to play.”

Andrea played at Lake Gibson. To this day she still holds a program record 43 points in a single game. After high school, she and her twin sister Andrell played at Gulf Coast Community College in Panama City.

“Basketball was the way to get us in school and we just succeeded from there,” said Smith.

The twins led Gulf Coast to a national championship. Andrea was named Junior College Player of the Year; she and her sister were recruited to play their final two seasons at USF by Jose Fernandez.

“Some guys just have that ‘it’ factor and she had it,” said Fernandez.  “There was a reason why she was so good. She always worked on her craft.”

It’s no surprise to Fernandez to see Andrea take that work ethic and apply it to a career like law enforcement.

“It’s great to see her continue to give back and to protect and serving these communities,” said Fernandez.

Andrea Smith has gotten to do everything she’s wanted, without ever really having to leave home. Her goal now is to serve the Lakeland community that gave her so much. And hopefully, inspire the next group of kids to follow their dreams.

“It’s show them that this is where you start and where you can be,” said Smith. “It shows them that we’re people, we’re human, we can have these interactions with you guys.”

And what better way to connect than a simple game of basketball.