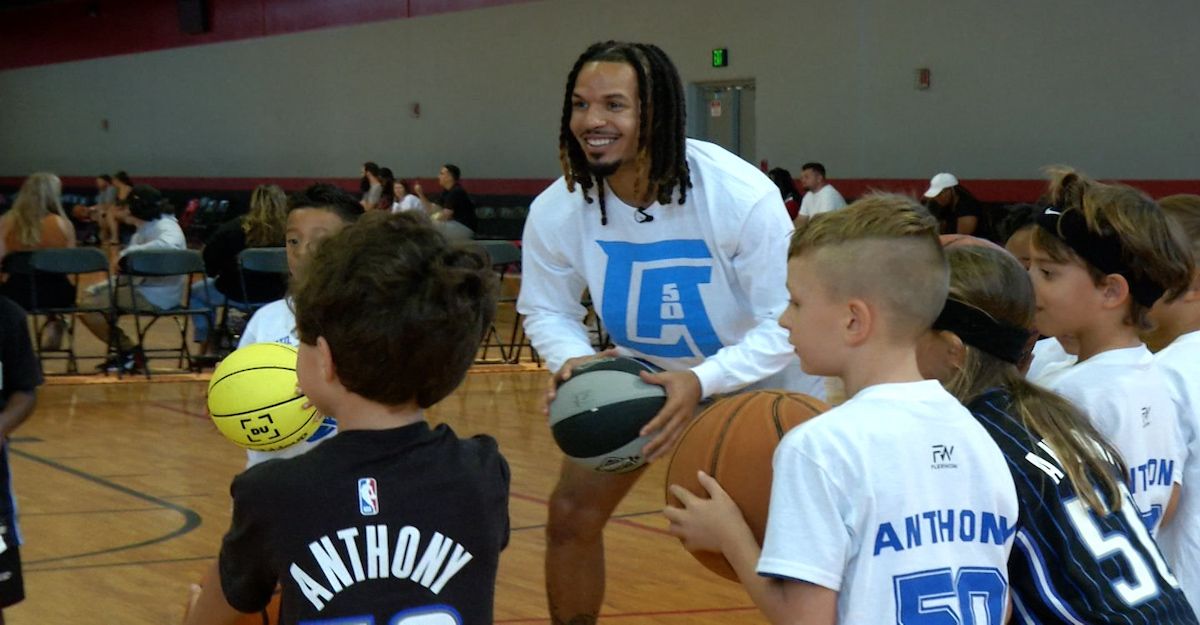 TAVARES, Fla -- Cole Anthony is used ot providing the Orlando Magic with energy and spark. On Saturday, he found some new, very little, sources of that fuel while hosting his inaugural youth camp.

"Seeing all these kids out here having a good time is invigorating," said Orlando Magic point guard Cole Anthony. "It gives me energy. I just really love kids and am having as good a time as they are I'm having that good a time."

Hundreds of kids came out to The Big House in Tavares to learn from one of their favorite NBA players before the season opens. One of those kids sees him more than just a basketball player.

"I see both but honestly I see more of big brother," said Tyson, Cole's 10-year-old brother.

Cole is the oldest of four siblings so he feels in his element when he is around kids, and especially family.

"They’re in awe of him," said NBA analyst and Cole's father Greg Anthony. "They love him, he walks on water as far as they’re concerned. He's a kid at heart so whats great is he plays with them, whatever they wanna do, he wants to do. Last night, he collects Pokemon cards and he had them going through Pokemon cards cause of course theyre into Pokemon cards."

Cole's childhood was unique: Greg was still in the NBA when he was young so Cole was able to find mentors in some of the games greatest very early on.

"i just remember when i was a kid, meeting an NBA player it didnt matter what type of nba player it was," said Cole Anthony. "I was like, 'this dude is where I wanna be,' it’s the coolest thing in the world to be able to see an NBA player. Especially when they interact with you and get out there and do what you do, it’s an awesome time I hope they appreciate it as much as I do."

A lot of the kids who came out to the camp were not only meeting a professional athlete for the first time, but got that unique experience to learn from and play alongside one while taking in the joys of the game.

"At the end of the day remember its a game and remember you play games to have fun," said Cole Anthony."

Greg Anthony stood to the side and watched his oldest do what he loves, spreading his passion and energy to the next group of players, and watching his youngest Tyson, becoming that same wide-eyed kid Cole once was.

"I love, I like a lot how he’s worked very hard and I enjoy this as much," said Tyson. "I wanna share this with him and I wanna be a part of this with him. I look up to him so its amazing so he started just as me and one day hopefully I can be doing the same thing."

While Cole was giving back, at the end of the day he's just having fun as a kid at heart.

"Thats kinda who he is and I was joking with him and was like, buddy don’t ever grow up. keep the kid at heart in you," said Greg Anthony.