Saturday marked the 15-year anniversary of the Gulf Coast landfall of Hurricane Katrina, one of the deadliest hurricanes in modern American history.

After making a surprisingly harsh landfall on South Florida as a Category 1 hurricane days earlier, Katrina strengthened into a monster over the Gulf of Mexico before its second and final landfall on the morning of August 29th, 2005. While Katrina technically made landfall as 'only' a high-end Category 3 over Buras, Louisiana (it had been a Category 5, with winds of 175 mph just hours before landfall), it still packed winds of about 125 mph as it moved onshore. 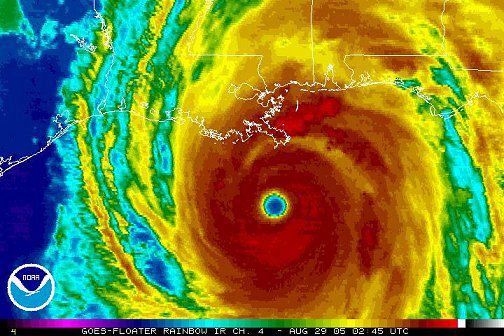 The eye of Hurricane Katrina just before landfall on August 29th, 2005.

Ultimately, though, it was Katrina's massive storm surge that proved to be by far the hurricane's deadliest feature.

A storm surge estimated to be between 10 and 28 feet high devastated New Orleans, along with much of southeastern Louisiana and coastal Mississippi.

Katrina's surge flooded most of New Orleans and permanently scarred the city.

Katrina's final statistics are sobering. An official total of 1,833 people lost their lives in the storm, and $108 billion (unadjusted for inflation) of damage were caused by the hurricane as well. At the time, Katrina became the costliest hurricane in U.S. history.

But the numbers don't tell the full story of the suffering and devastation that this hurricane caused the Gulf Coast, with countless thousands of others forced to permanently leave their destroyed homes.

Despite Katrina's ultimate impact, the storm was well forecast. A now-famous memo written by the National Weather Service office in New Orleans a day before landfall correctly warned of the catastrophic impact the storm would have.

In the bulletin, the weather service predicted that the area would be "uninhabitable for weeks" and of "devastating damage". Unfortunately, the predictions came true about 24 hours after the dire warning. Katrina etched its name into history 15 years ago, but its impact on the region will never be forgotten.