September Hurricanes That Brought Devastation to the U.S.

September is the peak of the Atlantic hurricane season.

This is because wind shear, the change of speed and/or direction of the wind with height, is weaker, and the ocean waters are extremely warm.

September 10 is typically the last day for peak tropical activity. From then on out, activity tends to decline, but this doesn't mean we won't see strong storms.

Let’s take a look back in recorded history to some of the strongest storms that occurred during September. 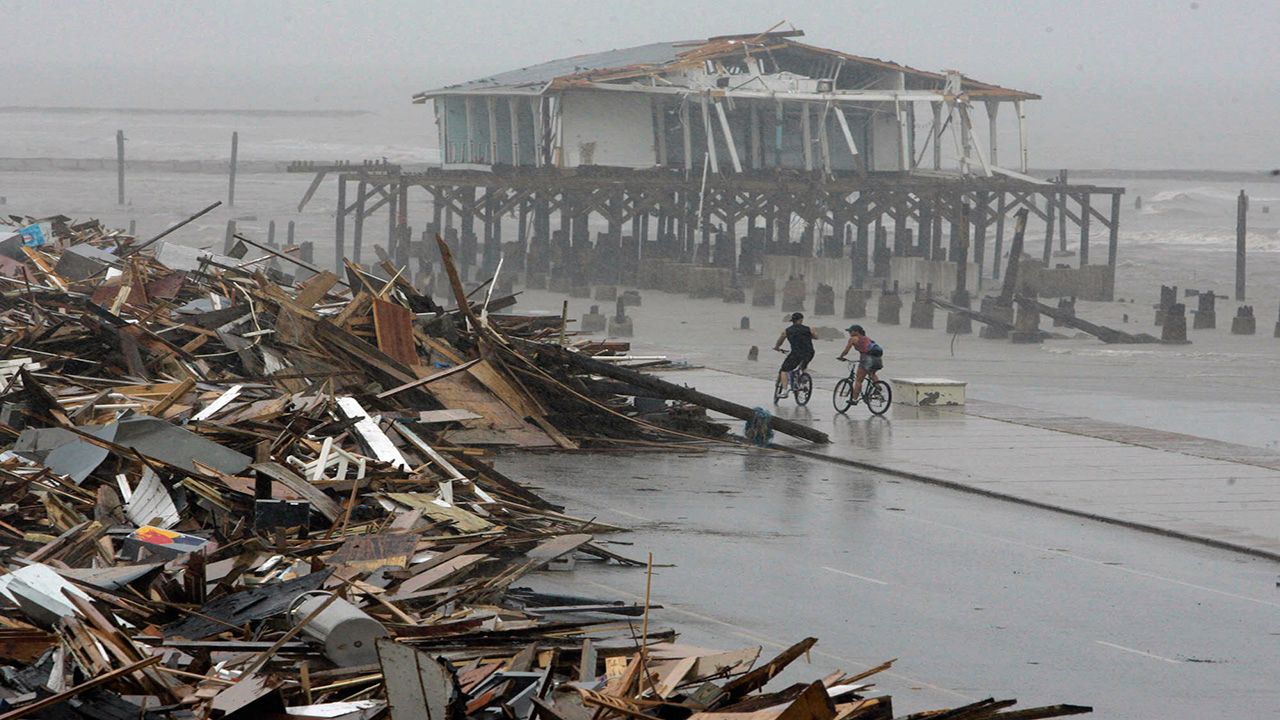 Two people ride past debris piled up on the beach in Galveston, Texas after Hurricane Ike hit the coast. Courtesy: AP/Matt Slocum.

Hurricane Ike in 2008: Our first hurricane takes us back to 2008 when a tropical wave slid off the coast of Africa at the end of August. It developed into a tropical depression on September 1, and on the same day, became a tropical storm.

Ike became a hurricane on September 3, underwent rapid intensification, and became a major hurricane later that same day. By the morning of September 4, it reached a maximum intensity of 145 mph.

Ike first made landfall in Cuba as a Category 4 hurricane bringing devastating impacts then weakening.

After, it moved into the Gulf of Mexico and regained strength, reaching Category 2 status before making landfall near Galveston, Texas on September 13.

Ike’s slow movement and large wind field led to a storm surge up to 20 feet. All homes were destroyed on the Bolivar Peninsula, and roads were completely submerged by floodwaters and blocked by fallen debris.

74 people were killed in the state of Texas, alone.

Ike’s northeast movement brought impacts far north to the upper Midwest and Northeast, causing extensive wind damage and leaving millions of people without power for over a week.

Hurricane Rita in 2005: The 2005 Atlantic hurricane season will forever be a memorable one with many strong storms impacting the U.S. that year.

Only a few weeks after Hurricane Katrina, Rita developed into a tropical depression near Turks and Caicos on September 18.

It tracked west for several days and underwent rapid intensification in the Gulf of Mexico, becoming a major Category 5 hurricane on September 21. Rita weakened to a Category 3 hurricane right before making landfall with southwest Louisiana on September 24.

Rita caused $18.5 billion in damage, bringing up to 15 feet of storm surge to the coast of Louisiana and Texas. Most homes were badly damaged or destroyed.

Rita’s storm surge overtopped the levees that were newly repaired from the destruction of Hurricane Katrina the month prior, worsening the devastation across the city of New Orleans. 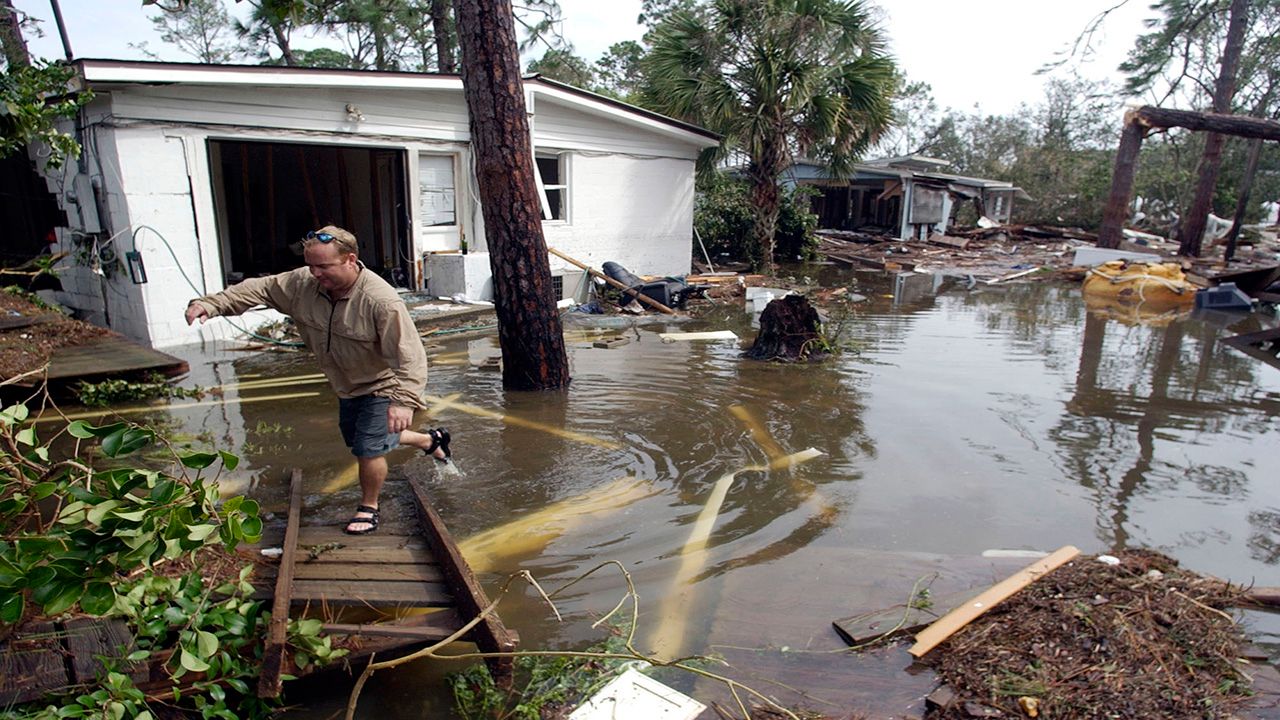 Hurricane Ivan in 2004: Ivan formed in the central Atlantic on September 2, tracking west-northwest for a week while intensifying.

It first brushed by Jamaica, Cuba, and the Cayman Islands, fluctuating between a Category 4 and Category 5 hurricane before weakening to a Category 3 hurricane in the Gulf of Mexico.

Ivan then made landfall near Gulf Shores, Alabama as a major Category 3 hurricane on September 16.

Ivan also produced over 100 tornadoes throughout 9 different states and dumped heavy rainfall along its path, racking up a total of $20.5 billion in damage.

Ivan then moved eastward back towards the Atlantic Ocean, curved back towards Florida, moved over the Gulf of Mexico for a second time, and made a second landfall in Louisiana as a Tropical Depression.

Luckily, it weakened quickly and didn’t produce any big impacts the second time around.

Hurricane Floyd in 1999: Floyd first originated as a tropical wave that moved off the coast of Africa on September 2.

It traveled west and gradually intensified to a major Category 4 hurricane while traveling through the Bahamas.

Floyd then turned north and paralleled the Florida coast, eventually weakening and making landfall at Cape Fear, North Carolina as a Category 2 hurricane.

Heavy rain, tornadoes, and high storm surge were all brought on by Floyd.

The peak of the storm surge, which reached 10 feet, occurred at high tide, and devastated the state.

Nearly every river in eastern North Carolina reached flooding stage. 17 inches of rain was dropped from Floyd which only added to the flooding.

Many people were not prepared for the cyclone, and emergency crews had to make more than 1700 water rescues.

Floyd traveled up the east coast and brought major flooding to northeastern cities as well. Many homes and businesses were destroyed, and hundreds of thousands of people were left without power for days. 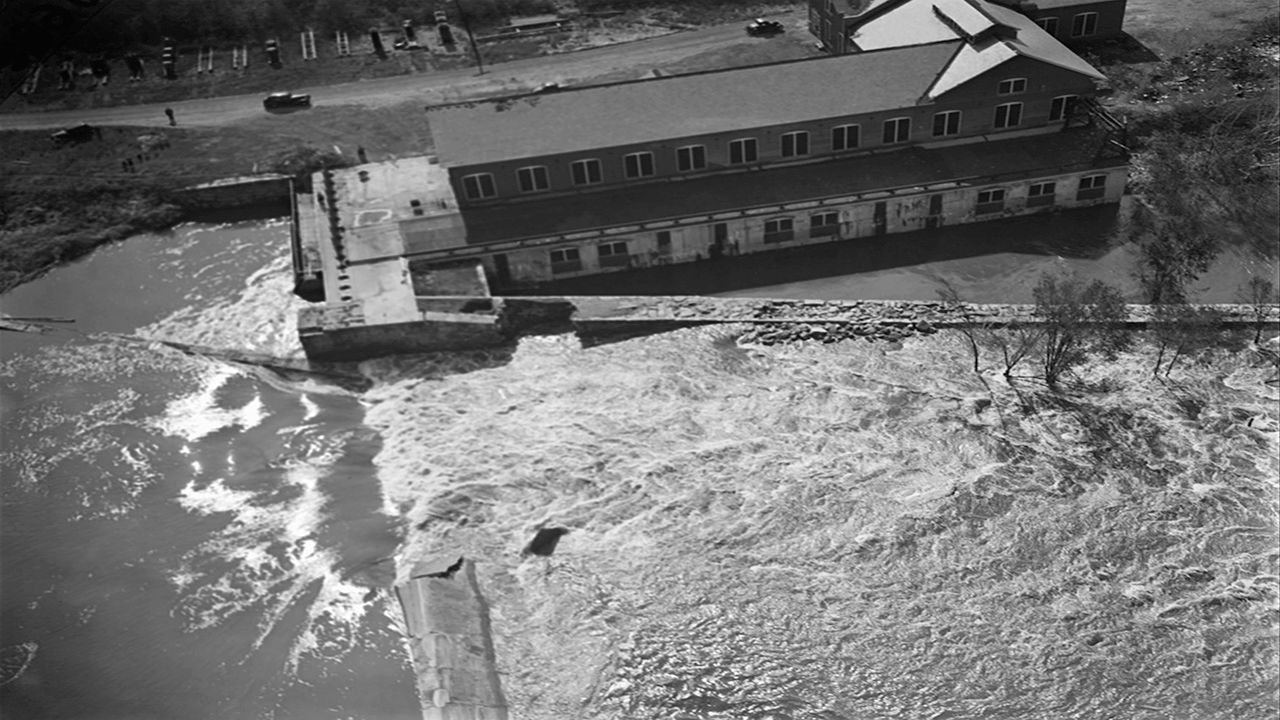 It continued up the east coast and eventually made landfall on Long Island, New York as a major Category 3 hurricane on September 21.

Further inland, on the same day, the hurricane made a second landfall as a Category 3 hurricane between Bridgeport and New Haven.

Storm tide reached close to 17 feet for areas, destroying many homes. Montauk was temporarily made into an Island.

Many residents received little warning of the hurricane which led to a deadly outcome. It is estimated that 500 to 700 people were killed.

The Great Miami Hurricane of 1926: Back in 1926, storm warnings were centralized in D.C. then distributed to other weather offices.

However, on the morning of September 17, less than 24 hours before the hurricane’s effects would be felt in Florida, no warning had been issued. It wasn’t until the afternoon when the Miami Weather Bureau Office was authorized to post-tropical storm warnings.

That same night, those warnings were bumped up to hurricane warnings.

By the morning on September 18, the hurricane that no one was prepared for made landfall in Miami, Florida as a major Category 4 hurricane.

Over 100 people in Miami were killed.

Many people were unfamiliar with hurricanes here at the time, and while the eye was passing, thought the hurricane was over.

The calm lasted about 35 minutes before the wind started to batter the coast again, and a 10-foot storm surge quickly pushed water on land, leading to a massive amount of destruction.

The Cheniere Caminada Hurricane of 1893: Also known as The Great October Storm, it first developed in the Caribbean Sea, bringing impacts to southern areas of Mexico.

It then moved into the Gulf of Mexico and intensified to a Category 4 hurricane before making landfall on Cheniere Caminada, Louisiana, completely wiping the town off the map.

Overall, over 2000 people were killed, making this hurricane one of the deadliest weather events in history.

The 1875 Indianola Hurricane: Our last stop takes us to 1875 when a cyclone just started brewing of the coast of Africa on September 1. It made its way west, intensifying, and first passing through the Caribbean.

It emerged in the Gulf of Mexico where it slowly made its way to Category 3 status and made landfall on September 16 near Indianola, Texas.

The town was completely devastated and many homes were leveled by the wind gusts. The storm surge washed away anything that was left, and hundreds of people were killed.

The town tried to rebuild, but 11 years later, another hurricane destroyed the town, leaving the city to be abandoned. 12 out of the 15 named storms have become the earliest to develop in the season for their letter, and we had nine storms form before August 1, which is also the most on record.

With the peak of hurricane season so close, we urge you to always stay prepared. This is when we see activity ramp up.

96 percent of Category 3, 4, and 5 hurricanes occur from mid-August to mid-October. This isn't to say that all hurricanes that develop will make landfall in the U.S., but it is always best to stay prepared for any scenario.