On the heels of a record-breaking 2020 Atlantic hurricanes season, the initial Colorado State University seasonal hurricane forecast is in, and it calls for a yet another above average season.

Here we go again: The first Atlantic hurricane seasonal forecast is in, and it calls for an above-average season in the Atlantic basin.

Colorado State University's tropical meteorology department issued its first seasonal outlook on Thursday, and they're calling for 17 named storms, eight hurricanes and four major hurricanes in the Atlantic. If that were to verify, it'd be well above the current 30-year average. 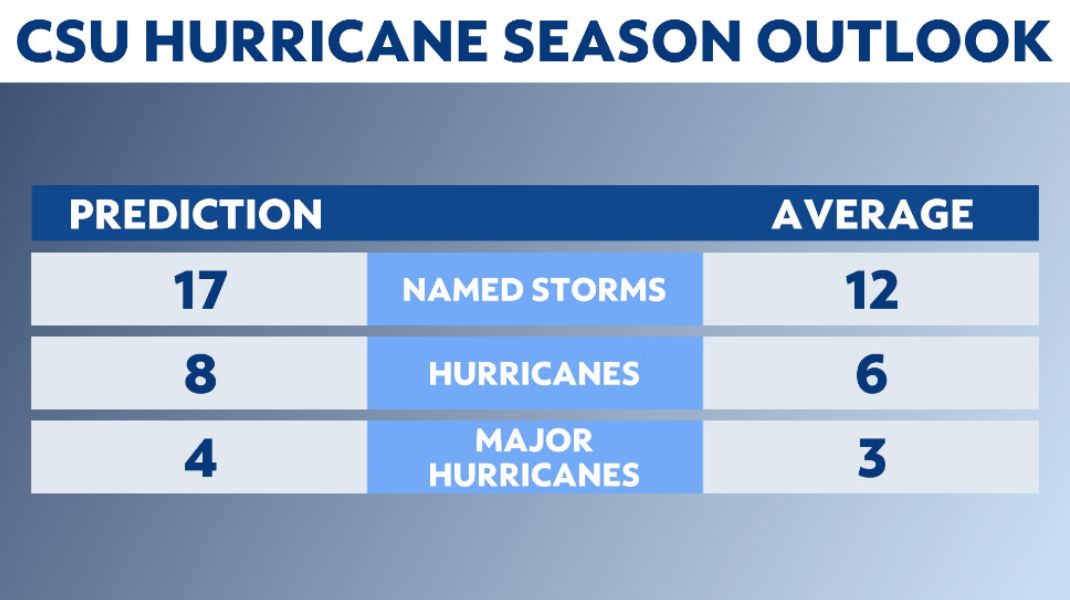 The Colorado State University seasonal tropical forecast for the Atlantic basin, led by Dr. Phil Klotzbach, often offers an early glimpse at how the upcoming hurricane season could lean.

The primary reasons behind the above-average forecast are a weak La Nina and warmer than usual sea-surface temperatures in the subtropical Atlantic. In addition, the forecast also calls for "an above-average probability for major hurricanes along the continental United States coastline and in the Caribbean."

A La Nina - a reference to cooler-than-average sea-surface temperatures in the central Pacific and the domino effect of global weather that comes from it - is often associated with a more active hurricane season. La Ninas typically reduce wind shear in the tropical Atlantic, creating a more favorable environment for tropical cyclones to form.

"Don't be Scared, Just be Prepared"

One of those changeable conditions could be the ENSO cycle and whether or not we'll have a La Nina this summer. If an El Nino (warmer-than-average sea-surface temperatures in the tropical Pacific Ocean) were to form, it'd likely increase wind shear and reduce tropical activity in the Atlantic.

"You never really know with ENSO, so we could see a sneaky quick El Nino development," Dr. Klotzbach said. "The (Climate Prediction Center) upped the chances for El Nino from 10% to 13%."

It's also exceptionally difficult to know where storms will go if they form. While a bunch of storms could develop, they may miss land or the U.S. entirely.

To account for all of these uncertainties, Spectrum News Chief Meteorologist Bryan Karrick frequently emphasizes the saying "don't be scared, just be prepared".

Last season, of course, featured a record-setting 30 named storms, beating that record from 2005.

Though there are a few asterisks behind that named storms figure, there's little doubt that 2020 was an exceptional year. Not only did 30 named storms develop, 13 hurricanes and six major hurricanes also formed in the Atlantic basin a year ago.

Buoyed by warm sea-surface temperature and low wind shear, 2020's storms started at a record pace in July and never really let up through the peak months of August, September and October.

The National Oceanic and Atmospheric Administration (NOAA) official forecast comes out next month.