Florida regains the title for lightning capital of the U.S.

Florida regains its title as the lightning capital of the United States when it comes to strikes per square mile.

Vaisala, the company that owns the National Lightning Data Network, has issued its report on lightning strikes in 2021 for the U.S. and the world.

In 2020, Oklahoma stole Florida's title as lightning capital when it came to the number of strikes per square kilometer. In 2021, Florida stole the title back.

Florida is once again the lightning capital of the United States based on strikes per square kilometer. The Sunshine State averaged 223 lightning events per square mile for the whole year.

Just east of Orlando, Geneve is the new lightning capital of the state. The Big Econlockhatchee Wildlife Management area had 857 lightning strikes per square mile in 2021.

However, when it comes down to what town specifically is considered the lightning capital in the U.S., Flatonia, Texas wins the title for having the greatest number of lightning strikes. Located between Houston and San Antonio, Flatonia recorded nearly 1,000 strikes per square kilometer. 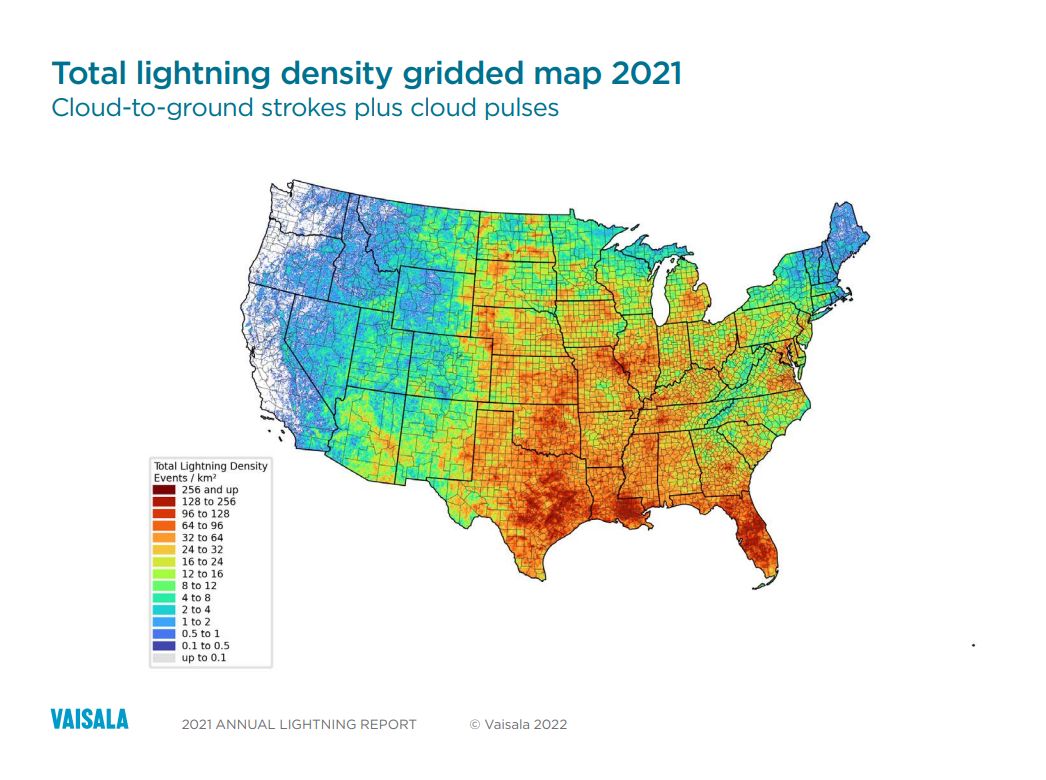 Here are the top nine lightning states based on strike density per square mile:

In 2020, Oklahoma took the title as the new lightning capital, stealing it from Florida. But since last year was pretty inactive by Oklahoma storm standards, the Sooner State dropped to fifth place in 2021.

What was the least active state for lightning in the U.S.? You probably could have guessed this one… Alaska!

Globally, Florida and the rest of the United States aren’t close to the top. When people say “Florida is the lightning capital of the world,” I have to laugh and say no, it isn’t even close. 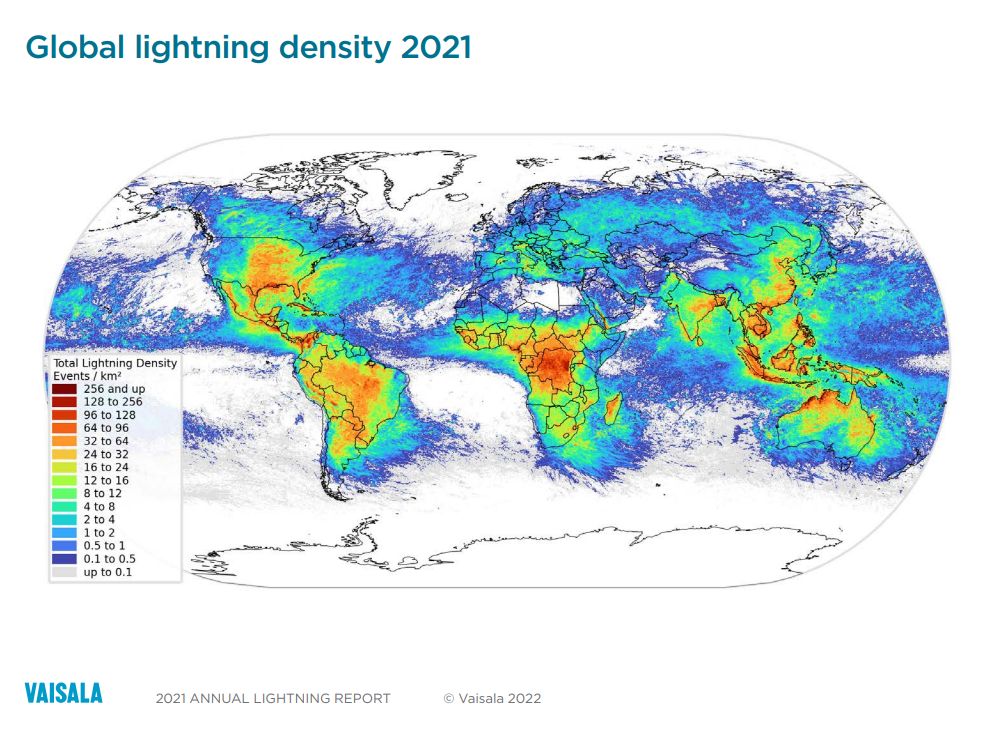 Here are the top nine lightning countries based on strike density per square mile in 2021:

The most active day for lightning in the United States in 2021 was May 2. There was a multi-day severe weather outbreak in progress and more than four million strikes were recorded (and 88 tornadoes). May 2 had double the number of strikes as the next most active day in 2021, Aug. 10.

What is also interesting to note is the incredibly low fatality count in 2021. Even though one death is one too many, 2021 had its fewest lightning deaths on record, which began in 1940. That is far fewer than the 432 fatalities that were recorded in 1943. 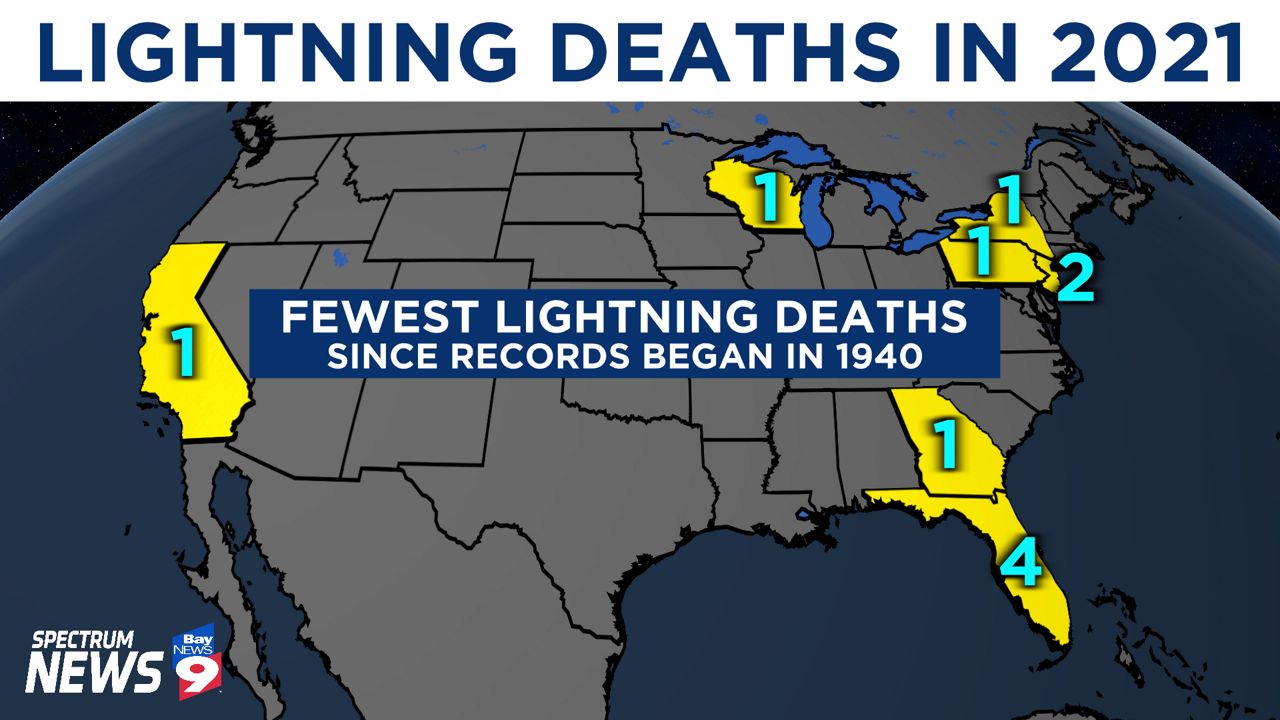 Florida recorded four lightning deaths in 2021: two on the beach, one on a golf course and another while a man was working on a roof.

Spectrum News would like to thank Chris Vagasky at Vaisala for this yearly report of interesting lightning information.