Do you know the names of Florida's coasts?

If you live in the Tampa Bay area, you've probably heard of the "Suncoast." It is used for names of businesses, organizations and even roads, like the Suncoast Parkway.

All around the state, regions of the coast have different nicknames. Some are more well-known than others. These names were coined for marketing and tourism, mainly in the 1980s and 1990s, and help to differentiate the personalities and geographies of each region of Florida. The lines between are not distinct.

Starting with the northeast part of Florida, there is the "First Coast." It got its name in 1983 because St. Augustine was the first permanent European settlement of the United States. St. Augustine was first settled in 1565. Jacksonville is also part of the First Coast. 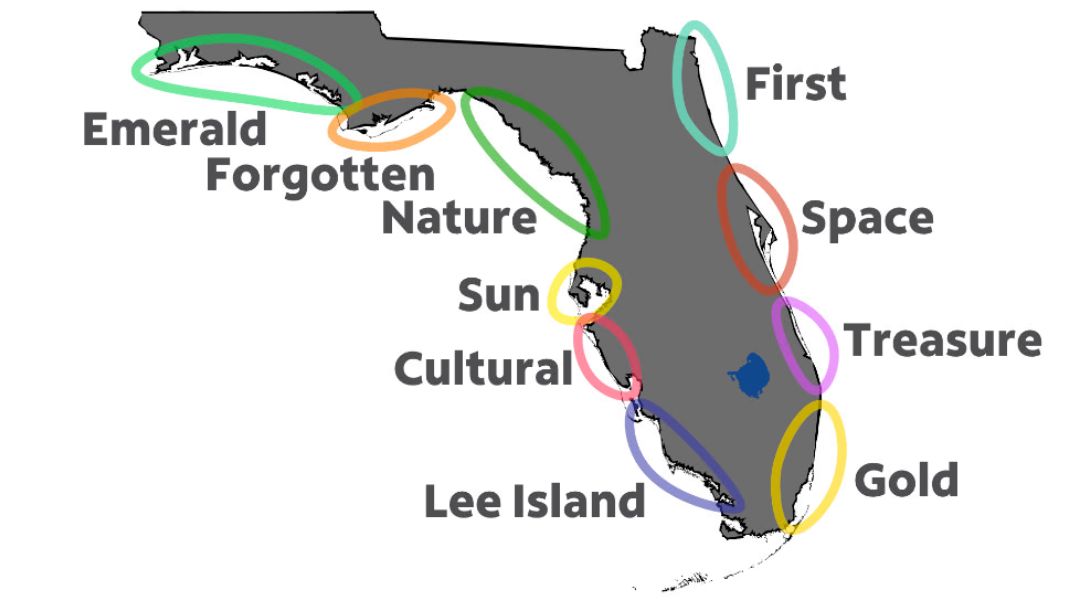 Moving south on the Atlantic Coast is the "Space Coast." This one is more obvious since it includes Cape Canaveral and Brevard County. Brevard County requested, and was given, the area code 321. I think you can figure out why!

South of the Space Coast is the "Treasure Coast." It includes Port St. Lucie and Vero Beach. It is named for the Spanish treasure fleet that wrecked in a hurricane in 1715. This area has had the nickname since 1961 when some of the treasure was found and started being recovered.

Southeast Florida, including Broward and Miami-Dade Counties, is called the "Gold Coast." This was coined in the early 1980s when the cost of living and the real estate value there were increasing dramatically.

Swinging around to the Gulf side is the "Lee Island-Coast." It includes Sanibel Island, Captiva Island, Fort Myers and Cape Coral. The region has big, beautiful barrier islands.

From Port Charlotte to Sarasota is the "Cultural Coast." It is known for its attraction to artists and musicians–think of the Ringling Museum. Sometimes Anna Maria Island is considered part of this coast, but it sometimes falls into part of the "Sun Coast" or "Suncoast."

The Tampa Bay area is named the "Suncoast." Some people say that this area gets the most sunshine in Florida, but parts of the Panhandle and Miami actually get a slightly higher percentage of sunshine per year than Tampa Bay. Its name comes from tourism marketing. It includes Manatee, Hillsborough and Pinellas Counties.

Next to the north is the "Nature Coast." It includes Pasco County north into the Big Bend area of Florida. It is known for having a less developed coast than the rest of Florida. It is characterized by its springs, rivers and forested areas. The nickname started showing up in 1991.

From the Big Bend area west, including Apalachicola, is the "Forgotten Coast." This is the only Florida coast that is actually a registered trademark name. It has small towns and undeveloped beaches. It includes Mexico Beach, which was destroyed by Category 5 Hurricane Michael in 2018.

The tip of the Panhandle is the "Emerald Coast," named for the color of the water there. It includes Panama City and Pensacola Beach.

So, now you know a little Florida trivia about the names of our coasts.