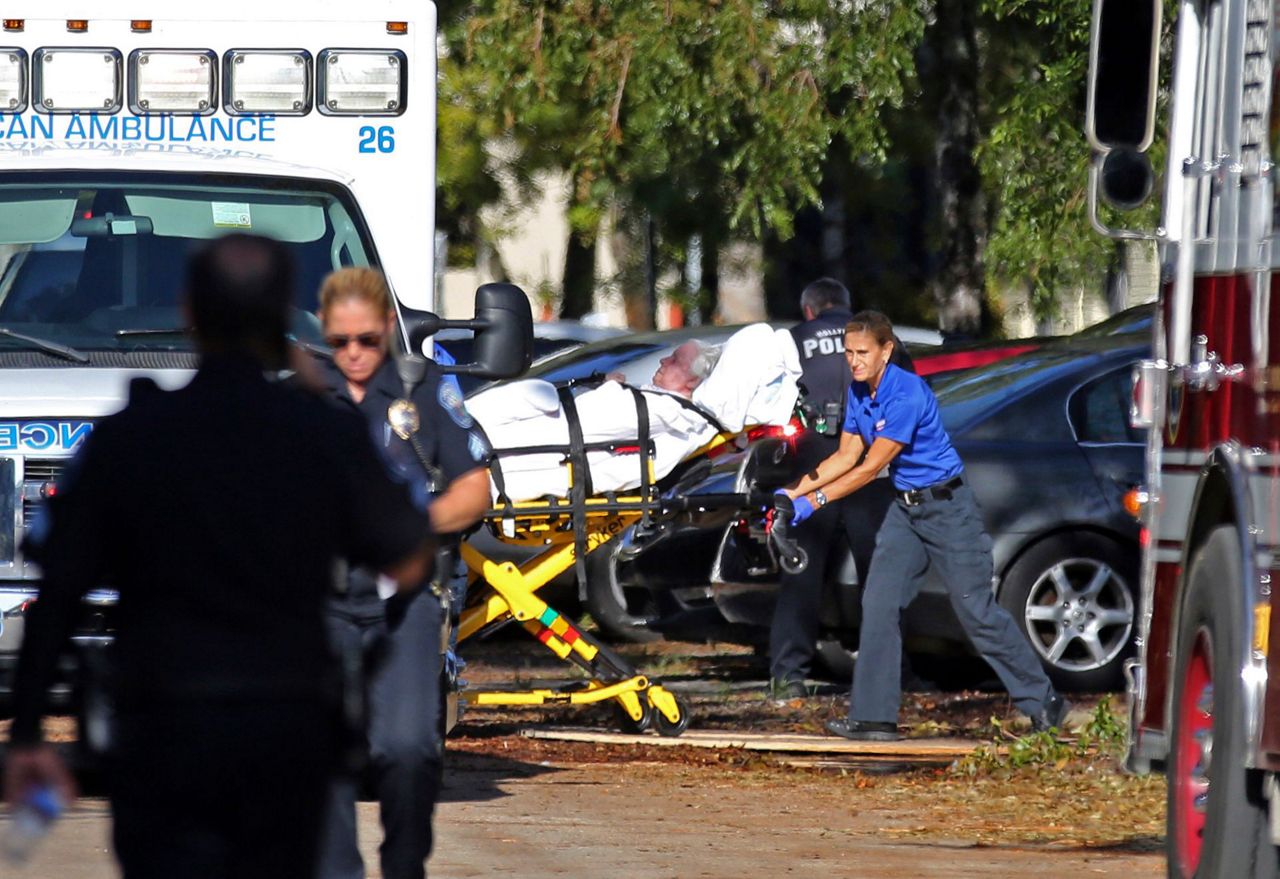 1 of 2
FILE - In this Wednesday, Sept. 13, 2017 file photo, a woman is transported from The Rehabilitation Center at Hollywood Hills as patients are evacuated after a loss of air conditioning due to Hurricane Irma in Hollywood, Fla. Defense attorneys said Sunday, August 25, 2019 that arrests are expected shortly in the case of a Florida nursing home where 12 elderly patients died after the complex lost power and was engulfed by sweltering heat during a powerful 2017 hurricane. (Amy Beth Bennett/South Florida Sun-Sentinel via AP, File) 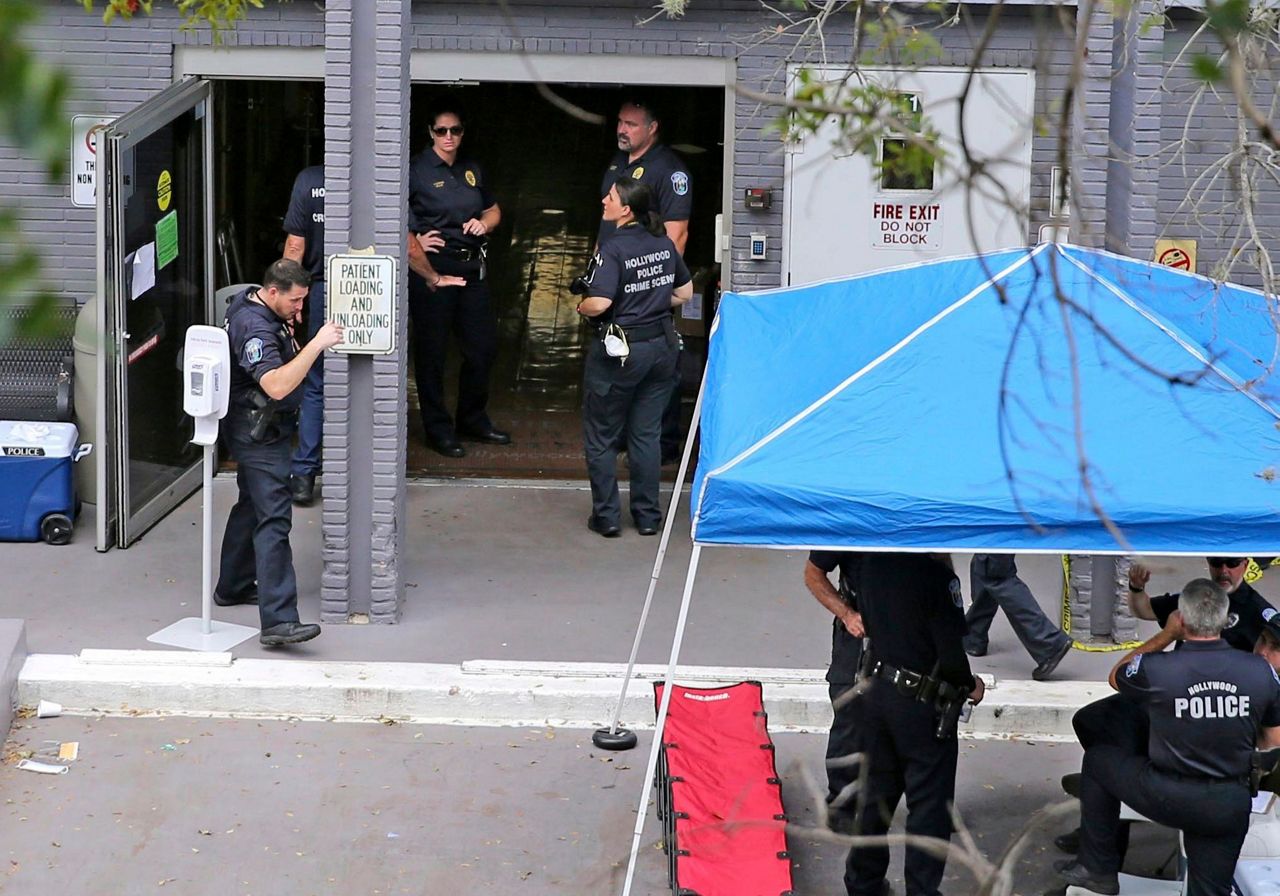 2 of 2
FILE - A Sept. 13, 2017 file photo shows a police staging area at the south entrance of the Rehabilitation Center at Hollywood Hills where residents died, in Hollywood, Fla. Defense attorneys said Sunday, August 25, 2019 that arrests are expected shortly in the case of the Florida nursing home where 12 elderly patients died after the complex lost power and was engulfed by sweltering heat during the powerful 2017 Hurricane Irma.(Charles Trainor Jr./Miami Herald via AP, File)

FORT LAUDERDALE, Fla. (AP) — Defense attorneys said Sunday that arrests are expected shortly in the case of a Florida nursing home where 12 patients died after its air conditioning power went out amid sweltering heat following Hurricane Irma in 2017.

Lawrence Hashish told The Associated Press his client is one of three nurses, in addition to an administrator, expecting to be charged in connection with the deaths after Hurricane Irma, which blew through Florida on Sept. 10 of that year. The storm knocked out a transformer linking the main air-conditioning unit to the power grid at the Rehabilitation Center at Hollywood Hills, sending temperatures soaring .

Hashish said the attorneys don't yet know what specific charges would be, but he expected those would likely entail some form of manslaughter offense.

Twelve deaths at the center had been ruled homicides . Police have been investigating the deaths for nearly two years but no charges have been filed thus far.

A voice message and email left by the AP for Hollywood Police were not immediately returned Sunday.

Hashish said his client and the others are merely scapegoats.

"The real crime is that the state is looking to blame selfless caregivers and the evidence will show that no crime was committed," he said in a telephone interview,

His co-counsel, Ilham Soffan, told the AP that their client was turning herself in Monday. The attorneys said they didn't have any further details about expected charges and planned to negotiate a bond agreement before an expected hearing Monday morning.

Patients began dying at the rehabilitation center days after the devastating hurricane struck Florida amid widespread power outages. Investigators said the center did not evacuate patients as temperatures inside began rising, even though a fully functional hospital was across the street. The home's license was suspended days after the storm and it was later shuttered.

Paramedic Craig Wohlitka and other paramedics from Hollywood Fire-Rescue testified last year that he was haunted by the deaths of patients there. Fire Lt. Amy Parrinello said one of the female patients had a temperature of 107.5 degrees (42 Celsius), the highest she had ever seen in his 12-year career. Later that morning, she said, another patient topped that with a temperature so high it couldn't be measured.

Wohlitka further testified that the crew decided to start checking other patients who hadn't been reported as ill. He said they saw a woman in a room who appeared sick, though a nursing home employee said they had just checked her and she was fine.

In the aftermath of Irma, the deaths made national headlines and sparked a political backlash. Months afterward, lawmakers passed a bill requiring backup power sources in Florida nursing homes and assisted living facilities. The legislation requires such facilities to have a generator capable of keeping nursing homes and assisted living facilities at 81 degrees Fahrenheit (27 degrees Celsius) or lower for at least four days.

Hashish declined to identify his client by name, but said she was works as a full-time nurse at another facility and was just picking up a shift that day in September 2017.

"They called her. They said, 'can you come and help? We're short-handed,' and look what she walked into," he said.