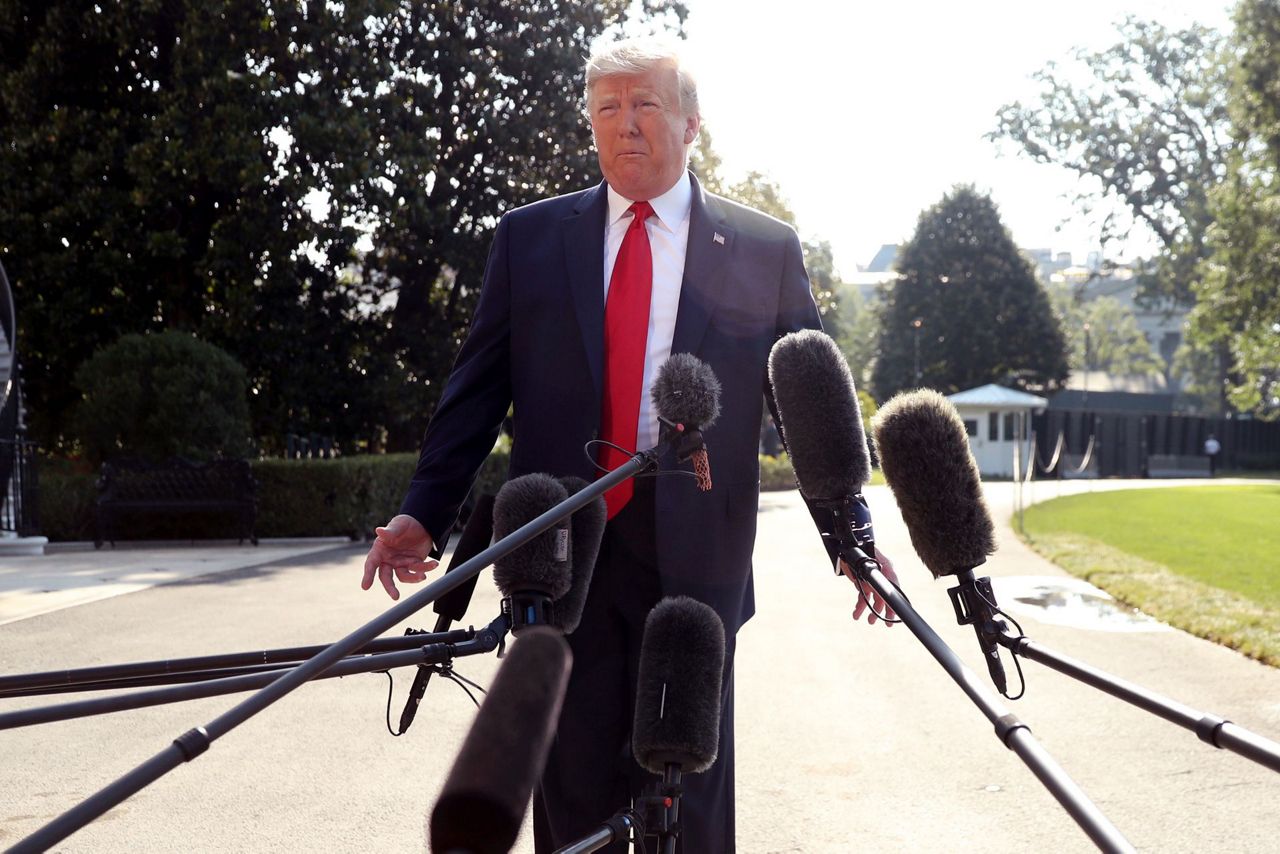 1 of 7
President Donald Trump talks to the press before walking across the South Lawn of the White House, in Washington, Wednesday, Aug. 7, 2019, to board Marine One for a short trip to Andrews Air Force Base, Md., and then on to Dayton, Ohio, and El Paso, Texas, to praise first responders and console family members and survivors from two recent mass shootings. (AP Photo/Andrew Harnik) 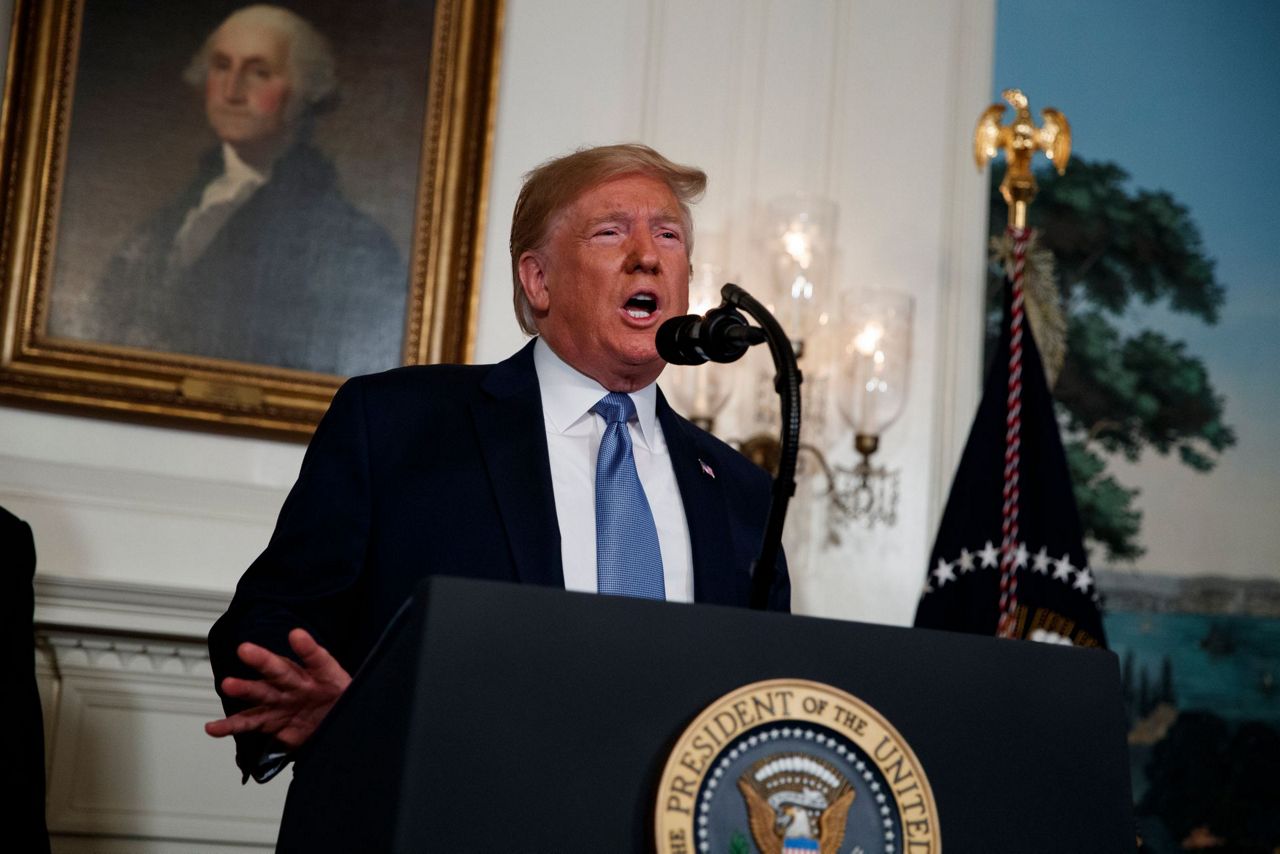 2 of 7
President Donald Trump speaks about the mass shootings in El Paso, Texas and Dayton, Ohio, in the Diplomatic Reception Room of the White House, Monday, Aug. 5, 2019, in Washington. (AP Photo/Evan Vucci) 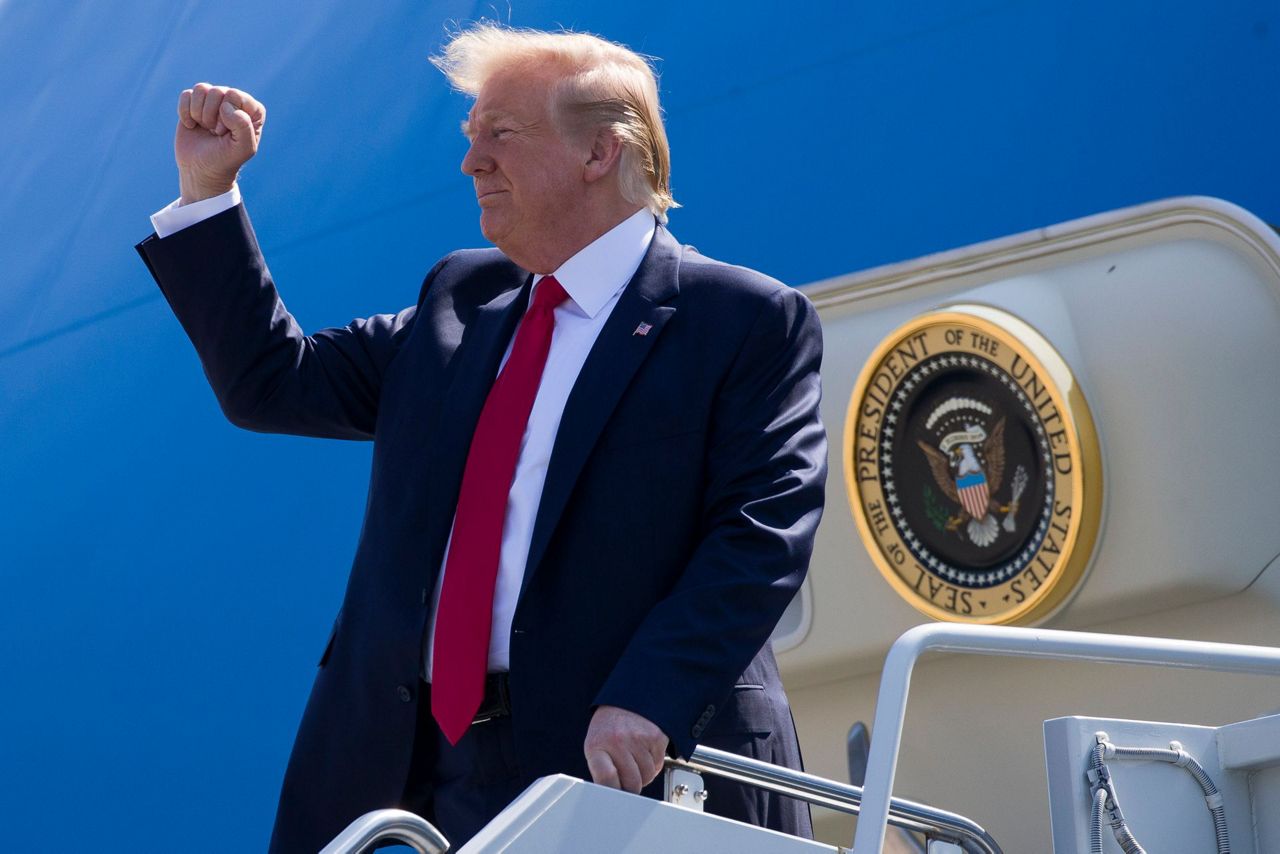 3 of 7
President Donald Trump speaks about the mass shootings in El Paso, Texas and Dayton, Ohio, in the Diplomatic Reception Room of the White House, Monday, Aug. 5, 2019, in Washington. (AP Photo/Evan Vucci) 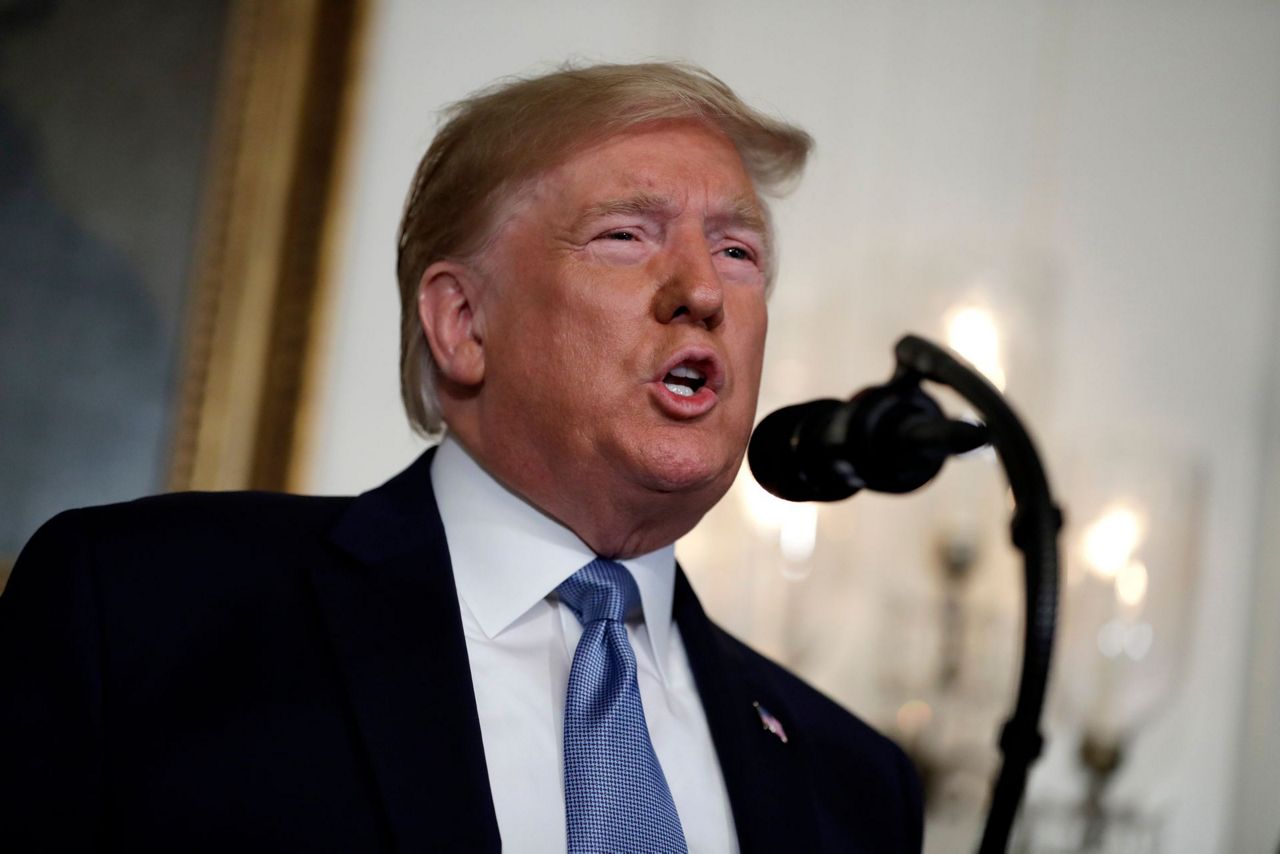 4 of 7
In this Aug. 5, 2019, photo, President Donald Trump speaks about the mass shootings in El Paso, Texas and Dayton, Ohio, in the Diplomatic Reception Room of the White House in Washington. As Trump attempts to return to the role of national unifier after yet another set of shooting tragedies, his efforts to heal a divided nation are further complicated by his own role in stoking the kind of incendiary rhetoric that appears to have inspired one of the shooters (AP Photo/Evan Vucci) 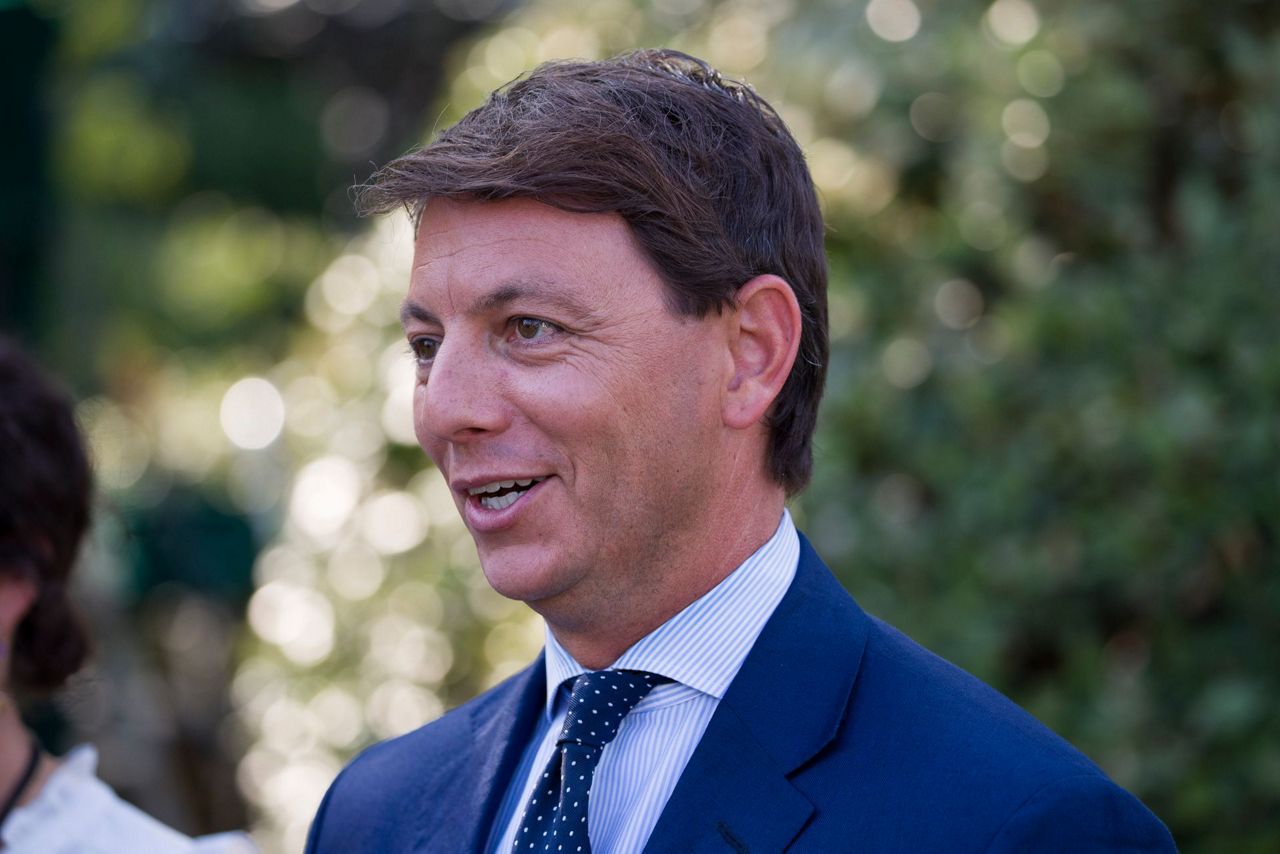 5 of 7
Deputy White House press secretary Hogan Gidley walks back to the West Wing after a television interview at the White House, Tuesday, Aug. 6, 2019, in Washington. (AP Photo/Alex Brandon) 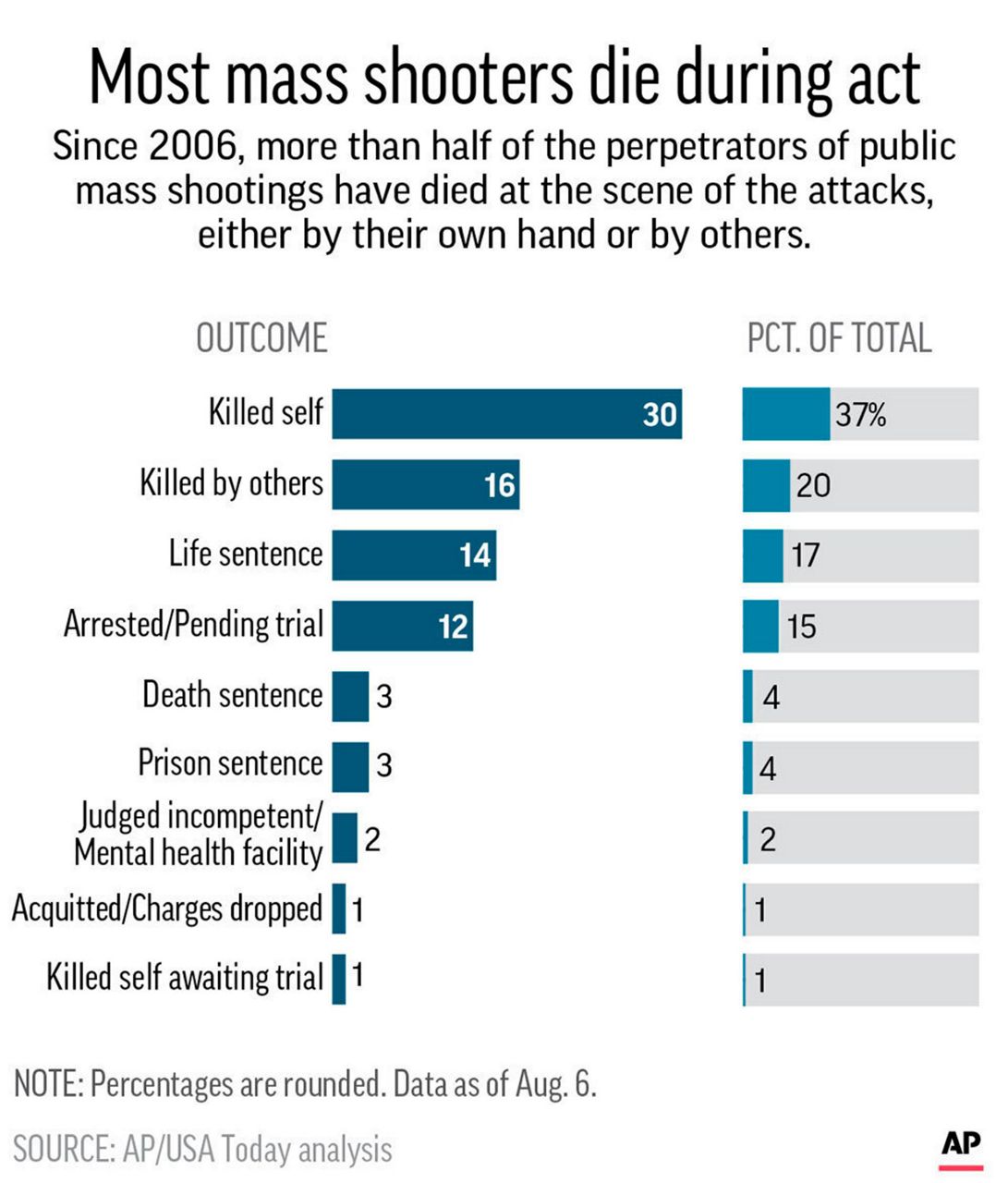 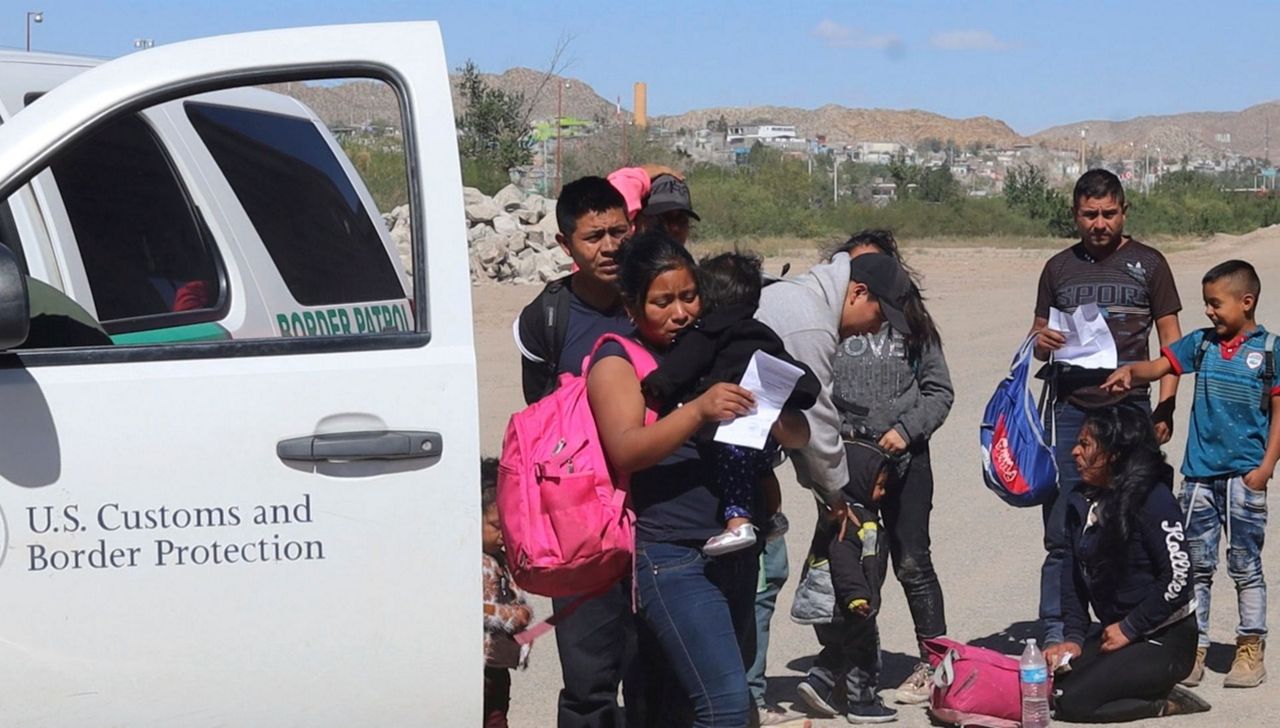 7 of 7
In this April 2019, frame from video, migrants turn themselves in to border agents in El Paso, Texas, after crossing the US - Mexico border. El Paso has swiftly become one of the busiest corridors for illegal border crossings in the U.S. after years as one of the sleepiest. (AP Photo/Cedar Attanasio)

Some skeptical as Trump prepares to visit sites of shootings

WASHINGTON (AP) — President Donald Trump headed to El Paso and Dayton on Wednesday to offer a message of healing and unity, but he will be met by unusual hostility in both places by people who fault his own incendiary words as a contributing cause to the mass shootings .

The mayors of both cities are calling for Trump to change his rhetoric about immigrants. Multiple protests are planned. And Democratic presidential candidates continue to criticize him, including former Rep. Beto O'Rourke, who will hold a counter-rally in his hometown of El Paso during the president's visit.

As the president left the White House, he strongly criticized those who say he bears some responsibility for the nation's divisions, returning to political arguing even as he calls for unity.

"My critics are political people," Trump said. "These are people that are looking for political gain."

He mentioned the apparent political leanings of the shooter in the Dayton killings, suggesting the man was supportive of Democrats.

But the president also said that Congress was making progress on possible new gun legislation.

"I'm looking to do background checks," Trump said. But he would not embrace a call for an assault weapons ban, saying that there was no political appetite for it.

He said anew that the most important thing is to keep guns out of the hands of the mentally ill.

It is a highly unusual predicament for an American president to at once try to unite a community and a nation at the same time he is being criticized as contributing to a combustible climate that can spawn violence.

Some 85% of U.S. adults believe the tone and nature of political debate has become more negative, with a majority saying Trump has changed things for the worse, according to recent Pew Research Center polling.

And more than three quarters, 78%, say that elected officials who use heated or aggressive language to talk about certain people or groups make violence against those people more likely.

White House officials said Trump's visits would be similar to those he's paid to grieving communities including Parkland, Florida, and Las Vegas, with the Republican president and the first lady saluting first responders and spending time with mourning families and survivors.

"What he wants to do is go to these communities and grieve with them, pray with them, offer condolences," White House spokesman Hogan Gidley said Tuesday. He said Trump also wants "to have a conversation" about ways to head off future deadly episodes.

"We can do something impactful to prevent this from ever happening again, if we come together," the spokesman said.

That's a tough assignment for a president who thrives on division and whose aides say he views discord and unease about cultural, economic and demographic changes as key to his reelection.

Trump, who often seems most comfortable on rally stages with deeply partisan crowds, has not excelled at projecting empathy, mixing what can sound like perfunctory expressions of grief with awkward offhand remarks. While he has offered hugs to tornado victims and spent time at the bedsides of shooting victims, he has yet to project the kind of emotion and vulnerability of his recent predecessors.

Barack Obama grew visibly shaken as he addressed the nation in the wake of the Sandy Hook elementary school massacre and teared up while delivering a 2016 speech on new gun control efforts. George W. Bush helped bring the country together following the Sept. 11 attacks, notably standing atop the smoking rubble of the World Trade Center, his arm draped over the shoulder of a firefighter, as he shouted through a bullhorn. Bill Clinton helped reassure the nation after the bombing of a federal building in Oklahoma City and the mass school shooting at Columbine High School.

Trump, too, has been able to summon soothing words. But then he often quickly lapses into divisive tweets and statements — just recently painting immigrants as "invaders," suggesting four Democratic congresswoman of color should "go back" to their home countries even though they're U.S. citizens and deriding majority-black Baltimore as a rat-infested hell-hole.

In the Texas border city of El Paso, some residents and local Democratic lawmakers said Trump was not welcome and urged him to stay away.

"This president, who helped create the hatred that made Saturday's tragedy possible, should not come to El Paso," O'Rourke tweeted. "We do not need more division. We need to heal. He has no place here."

Trump, on the eve of his El Paso trip, snapped back on Twitter that O'Rourke "should respect the victims & law enforcement - & be quiet!"

In Dayton, Mayor Nan Whaley said she would be meeting with Trump on Wednesday, but she told reporters she was disappointed with his scripted remarks Monday responding to the shootings. His speech included a denunciation of "racism, bigotry and white supremacy" and a declaration that "hate has no place in America." But he didn't mention any new efforts to limit sales of certain guns or the anti-immigration rhetoric found in an online screed posted just before the El Paso attack.

The hateful manifesto's author — police believe it was the shooter but investigation continues — insisted the opinions "predate Trump and his campaign for president." But the words echoed some of the views Trump has expressed on immigration, including claiming that Democrats "intend to use open borders, free HealthCare for illegals, citizenship and more to enact a political coup by importing and then legalizing millions of new voters."

Democrats vying to challenge Trump in the 2020 election have been nearly unanimous in excoriating him for rhetoric they warned has nurtured the racist attitudes of the El Paso shooter as they sought to project leadership during a fraught moment for a bruised nation.

Former Vice President Joe Biden, the front-runner in the 2020 Democratic primary, is slated to speak on white nationalism later Wednesday in Iowa. According to excerpts from his campaign, Biden will declare Trump "lacks the moral authority to lead" because he has "aligned himself with the darkest forces in our nation" and "in both clear language and in code ... has fanned the flames of white supremacy."

O'Rourke will be addressing an #ElPasoStrong rally Wednesday afternoon that will serve as counterprogramming to Trump's visit, in addition to attending a morning remembrance and making an evening visit to a makeshift memorial outside the Walmart where a gunman killed 22 people. And New Jersey Sen. Cory Booker will deliver a speech on gun violence and white nationalism at the Charleston, South Carolina, church where nine black parishioners were killed in 2015.

Gidley and other White House officials denounced suggestions that Trump's rhetoric was in any way responsible for the shooting.