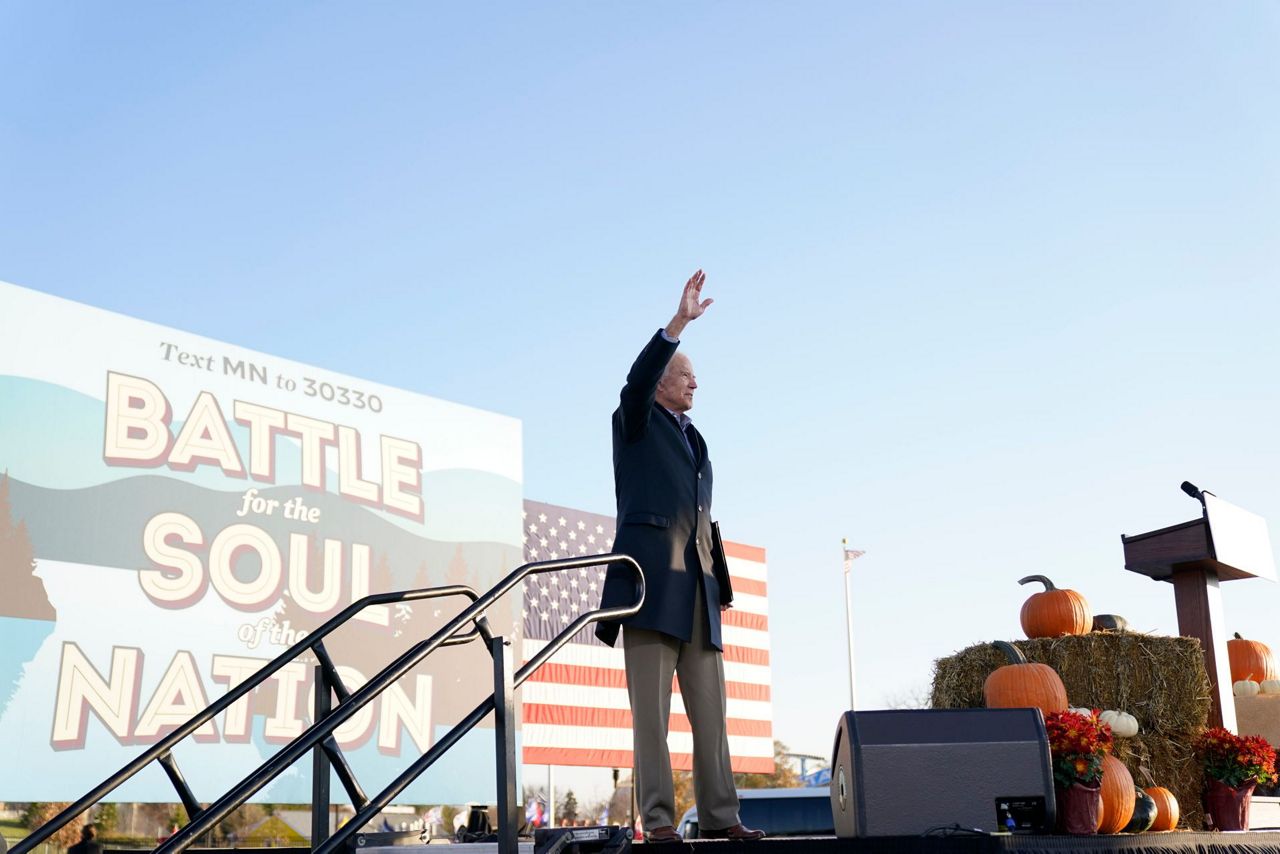 The Latest: Trump MN rally capped at 250 at state insistence

WASHINGTON (AP) — The Latest on the presidential campaign (all times local):

Democrat Joe Biden is taking on the protesters at his Minnesota rally.

A couple of large groups of Donald Trump supporters welcomed Biden with horns and pro-Trump flags and signs when he arrived at the Minnesota State Fairgrounds for a drive-in rally Friday afternoon.

A group close to the podium where he spoke blasted horns and shouted. Biden delivered a high-spirited speech, himself shouting to drown them out, but it was clear the crew of protesters caught his attention.

He said, “These guys are not very polite - but they’re like Trump.”

Biden also spoke about growing calls for a national mask mandate and added, “This isn’t a political statement, like those ugly folks over there beeping the horns — it’s a patriotic duty.”

Biden received an enthusiastic reception from the supporters gathered to see him speak, who honked wildly as he closed out his speech. Biden encouraged rallygoers who hadn’t yet turned in their ballots to drop them off in person as the deadline for early voting comes to a close.

HERE’S WHAT YOU NEED TO KNOW ABOUT THE PRESIDENTIAL RACE:

With four days to go until Election Day, Democrat Joe Biden is campaigning in Iowa, Minnesota, and Wisconsin, while President Donald Trump is holding rallies in Michigan, Wisconsin and Minnesota on Friday.

HERE’S WHAT ELSE IS GOING ON:

Melania Trump plans to make solo campaign appearances for the president on Saturday in the battlegrounds of Wisconsin and Pennsylvania.

The first lady will head to West Bend, Wisconsin, in the southeastern part of the state, followed by a stop in the northeastern Pennsylvania town of Wapwallopen.

President Donald Trump and Democrat Joe Biden are campaigning hard to win both states, where Trump scored narrow victories in 2016.

Both Trump and Biden have appeared multiple times in both states, and both are campaigning in Wisconsin on Friday.

Mrs. Trump made her first solo appearance of the 2020 campaign earlier this week in Pennsylvania.

She also warmed up the crowd at a Trump rally in Tampa, Florida, on Thursday.

Retailers including Nordstrom, Tiffany and Saks Fifth Avenue say they’re planning to board up windows or add extra security personnel in some locations ahead of the presidential election.

Retailers are trying to protect themselves against any civil unrest in a year that has seen widespread protests over social justice. More than 600 locations, particularly in Chicago, New York and Washington, D.C., have put in work orders to board up windows or add related security measures in advance of the election, according to ServiceChannel, which connects retailers with contractors that do such work. Nearly two-thirds of those orders have been received since this past Tuesday.

The National Retail Federation, the retail industry’s largest retail trade group, says it has sent advisories to its members and created forums for them to discuss security strategies. But the trade group’s general counsel, Stephanie Martz, says stores are straddling a fine line.

Martz says, “If you board up early, does that increase the likelihood there is going to be violence in that area, or does that discourage it?” In balance, she says she thinks it discourages it.

Democrat Joe Biden is making his case against President Donald Trump on the coronavirus in Iowa, one of the states hit hardest by the pandemic.

Speaking Friday at a drive-in rally at the Iowa State Fairgrounds, Biden rattled off a litany of statistics about how the pandemic has hit the state, noting Iowa has hit a daily record number of cases and hospitalizations this week and highlighting the steep job losses there since the pandemic hit.

He mentioned that the Iowa State Fair was canceled this year for the first time since World War II and charged that “Donald Trump has given up.” Biden pledged to enact a plan to halt the spread of the virus and told the crowd, to honks from the cars gathered, “unlike Donald Trump, we will not surrender to the virus.”

While Iowa is not a must-win for Biden, most polls there show a close race, and a loss there for the Trump would complicate his path to reelection.

Biden also promoted Democratic Senate candidate Theresa Greenfield, telling her, “You have no idea how much you’re going to make my night when you win.”

President Donald Trump is talking up strong car sales and grousing about Michigan’s governor as he visits the state as part of a three-state swing to the Midwest on Friday.

Trump has made criticism of Democratic Gov. Gretchen Whitmer a staple of his rallies in the state. He told the crowd about the need to ease restrictions put in place because of COVID-19, prompting “Lock her up!” chants from the thousands who gathered.

Trump, referring to the chants and the media, said: “They blame me every time that happens.”

Trump’s visit comes as the number of COVID-19 cases reaches a record high nationally, but he complains that his challenger, former Vice President Joe Biden, has predicted a dark winter ahead.

Trump says, “Just what our country needs is a long dark winter and a leader who talks about it.”

Joe Biden will spend his final day before Election Day hitting a familiar battleground: Pennsylvania, his home state and the one he’s visited more than any other this campaign.

The Biden campaign announced Biden, his wife, Jill, Sen. Kamala Harris and her husband, Doug Emhoff, will blanket the state Monday, with plans to “fan out across all four corners of the state.”

It’s unclear which cities the four will hit, but Biden has so far traveled to Pennsylvania 11 times since being named his party’s nominee at the convention — and he’ll add another visit this weekend.

The campaign announced in addition to his Monday trip to the state, Biden will campaign in Philadelphia on Sunday.

The attention paid to the state underscores its significance for both Biden and President Donald Trump. While Biden’s aides argue the Democrat has multiple paths to victory and doesn’t need to nab Pennsylvania to win the White House, it would be virtually impossible for Trump to win reelection without the state.

President Donald Trump is hitting the Midwest as he begins the critical final stretch before Election Day. He’ll be campaigning in Michigan and Wisconsin — two states he narrowly carried in 2016 — as well as Minnesota, which he narrowly lost.

Trump told reporters as he left the White House in his signature hyperbole, “We got the biggest crowds in the history of politics and I think you will all be witness to that.”

Trump has been drawing thousands of supporters, most not wearing masks, to rallies across the country despite the coronavirus pandemic and has faced minimal opposition from local leaders.

But state and local officials have insisted he abide by a 250 cap on large events in Rochester, Minnesota.

Trump complained that “25,000 people want to be there. And they say you can only have 250 people. They thought I’d cancel. But I’m not canceling and we’ll find out what happens.“

His closing sprint to Election Day will include three stops in Pennsylvania on Saturday and nearly a dozen events in the final 48 hours across states he carried in 2016.

Democrat Joe Biden was visiting Iowa, Wisconsin and Minnesota on Friday. He will hit Michigan on Saturday, where he’ll hold a joint rally with former President Barack Obama.

Joe Biden is insisting he doesn’t “take anything for granted” as he launches into his busiest day of the general election campaign yet, with stops in three Upper Midwest states planned for Friday.

The Democratic presidential candidate will appear at drive-in rallies in Iowa, Wisconsin and Minnesota. While Iowa and Wisconsin are swing states that President Donald Trump won in 2016, Minnesota is one where Hillary Clinton was victorious. It’s the first state that a Democrat won in 2016 that Biden has visited in weeks; his last campaign event in such a state was in Nevada in early October.

Biden last visited Minnesota in September. But Republicans are making a play for the state, and Trump will campaign there Friday as well.

Still, Biden insisted to reporters that “I’m not concerned” about Minnesota. He said he was visiting the state because of its proximity to Iowa and Wisconsin, adding, “We’re gonna work for every single vote up ’til the last minute.”

President Donald Trump’s campaign says it will cap his planned rally Friday in Rochester, Minnesota to 250 people at the insistence of state and local officials.

The announcement comes as Trump’s campaign sought to shift the venue to a nearby business but ultimately reversed course and moved ahead with the rally at the airport. Trump has packed thousands of supporters, most not wearing masks, into similar rallies across the country, despite the raging coronavirus pandemic.

The campaign said: “Thanks to the free speech-stifling dictates of Gov. Tim Walz and Attorney General Keith Ellison, only the first 250 people will be admitted.”

In recent months Trump and his campaign have taken to calling their rallies “peaceful protests” as they flout local restrictions on gathering sizes due to the virus.

The Minnesota Department of Health has linked 28 coronavirus cases to other recent Trump campaign events in the state.

Democrat Joe Biden, meanwhile, will be holding a socially-distanced drive-in event in St. Paul on Friday, his campaign said.