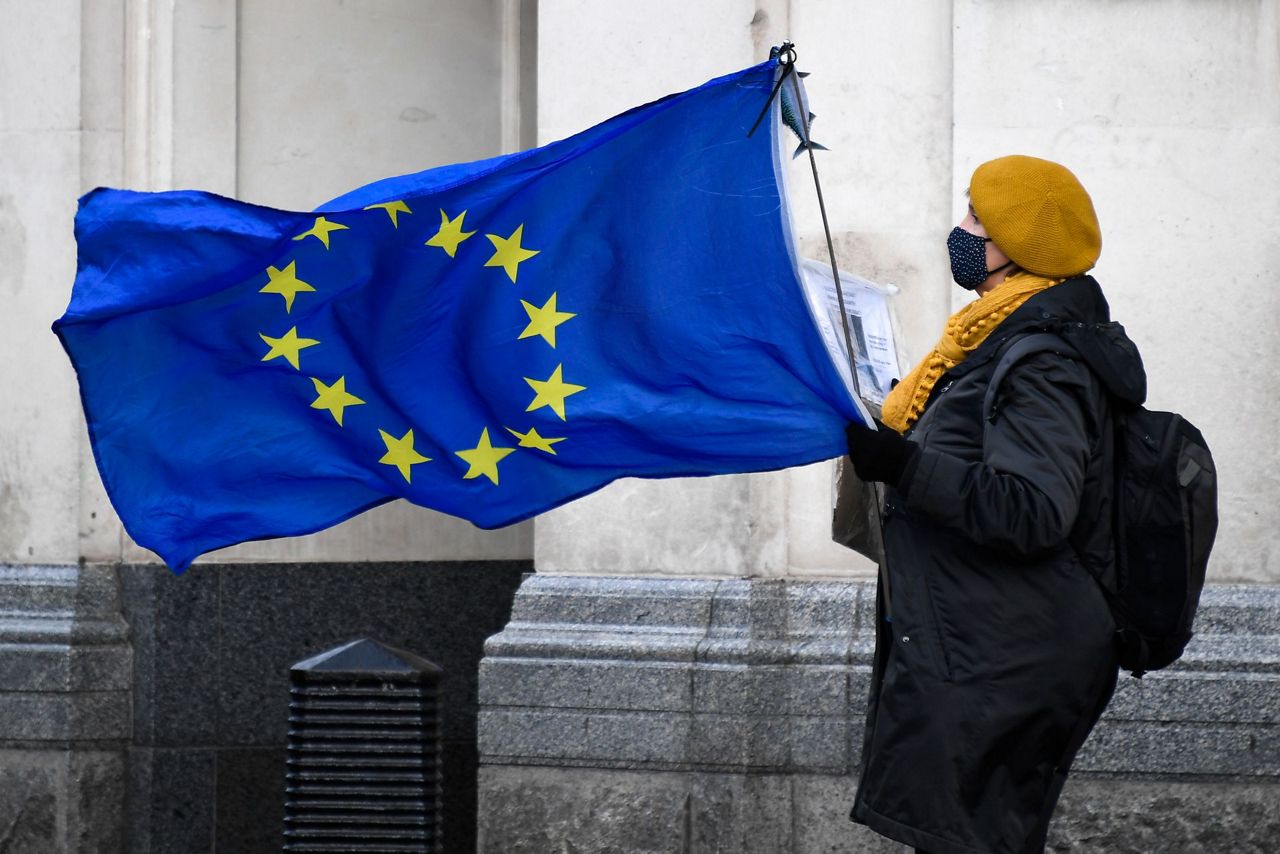 1 of 6
An anti-Brexit demonstrator holds an EU flag in Parliament Square, in London, Wednesday, Dec. 16, 2020. Ursula von der Leyen said Wednesday she saw clear progress in the trade talks with the UK, turning a post-Brexit deal from a fleeting possibility into an ever more realistic possibility. (AP Photo/Alberto Pezzali) 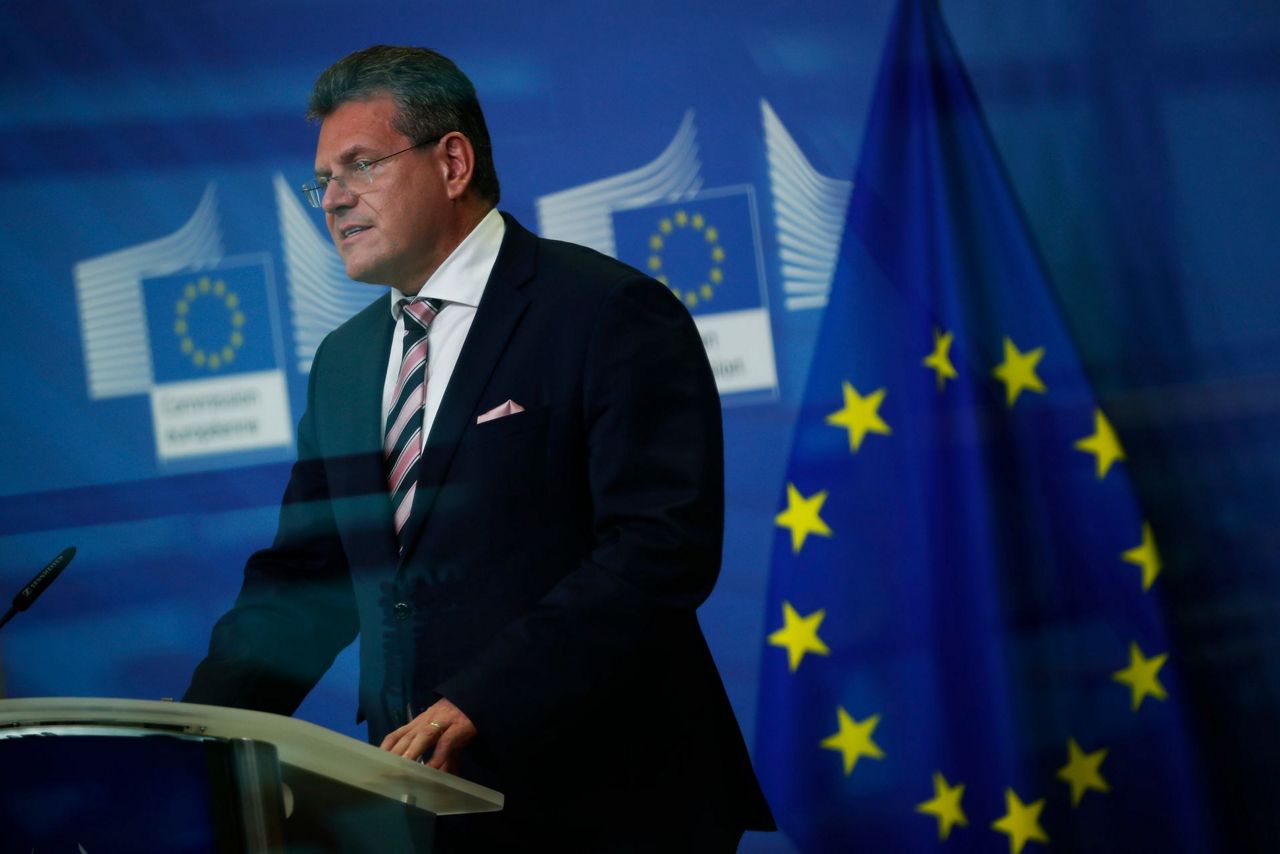 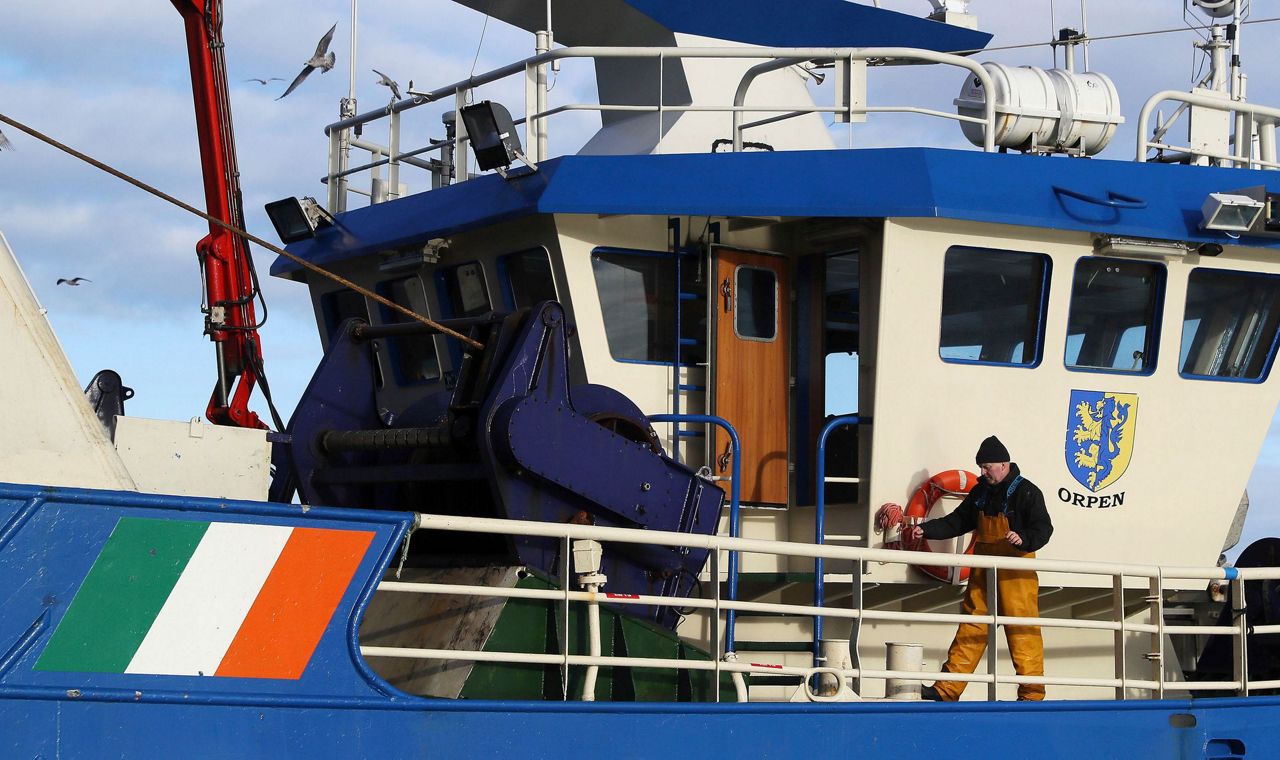 3 of 6
A fisherman aboard a vessel after docking in the fishing village of Howth, Dublin, Ireland, Thursday, Dec. 17, 2020. Irish coastal communities will be "annihilated" if Britain's post-Brexit fishing demands are granted, an Oireachtas committee has been told. (Brian Lawless/PA via AP) 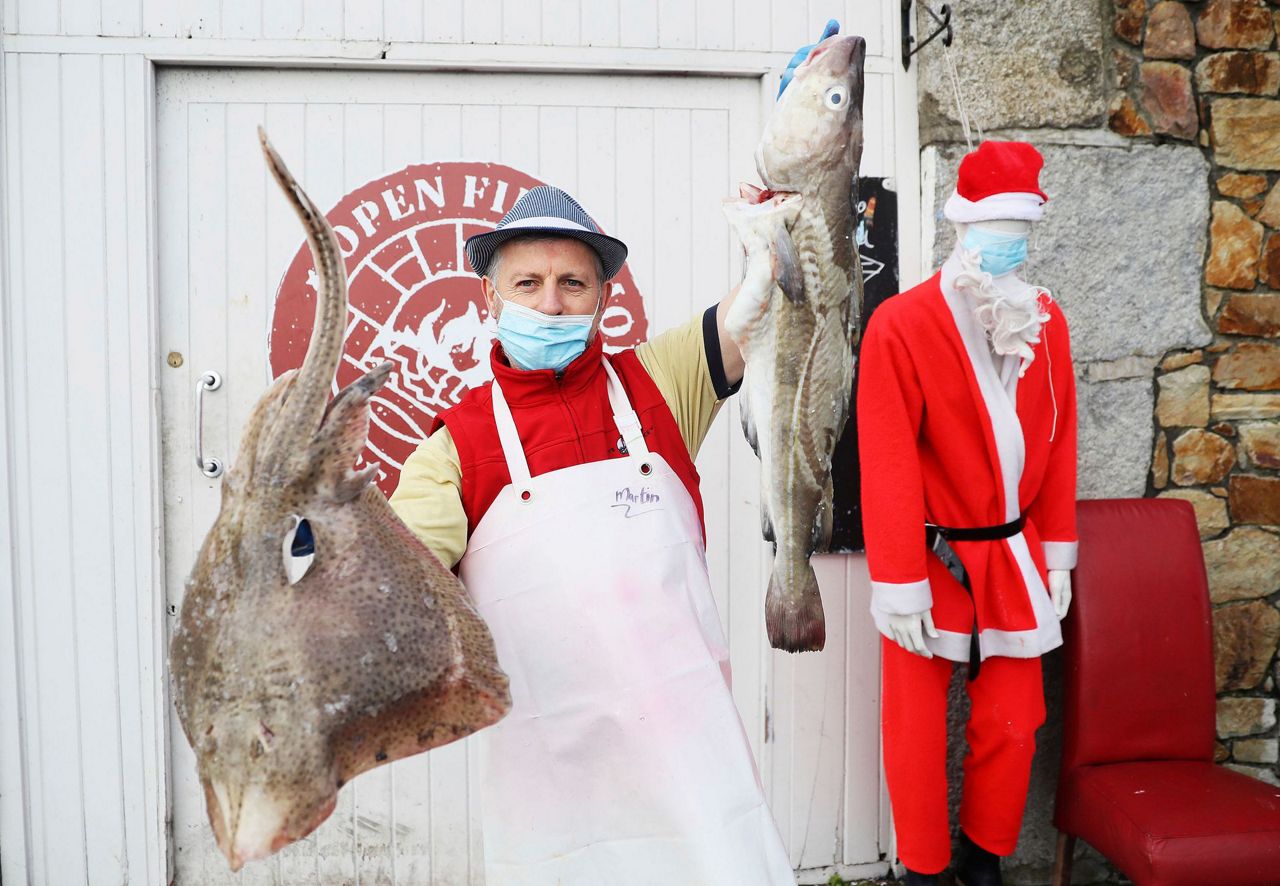 4 of 6
Martin McLoughlin, owner of Nicky's Plaice fishmongers, poses at his premises in the fishing village of Howth, Dublin, Ireland, Thursday, Dec. 17, 2020. Irish coastal communities will be "annihilated" if Britain's post-Brexit fishing demands are granted, an Oireachtas committee has been told. (Brian Lawless/PA via AP) 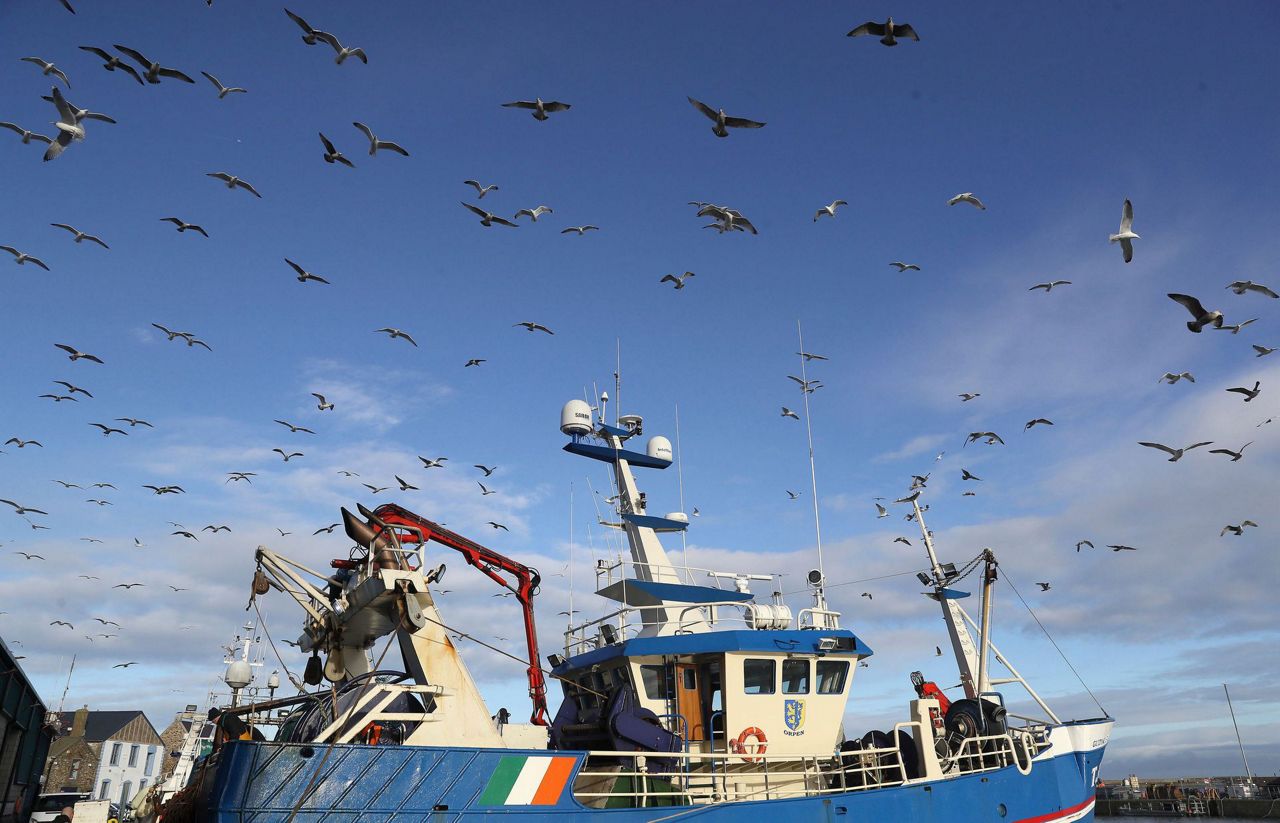 5 of 6
A fishing vessel comes into the harbour in the fishing village of Howth, Dublin, Ireland, Thursday, Dec. 17, 2020. Irish coastal communities will be "annihilated" if Britain's post-Brexit fishing demands are granted, an Oireachtas committee has been told. (Brian Lawless/PA via AP) 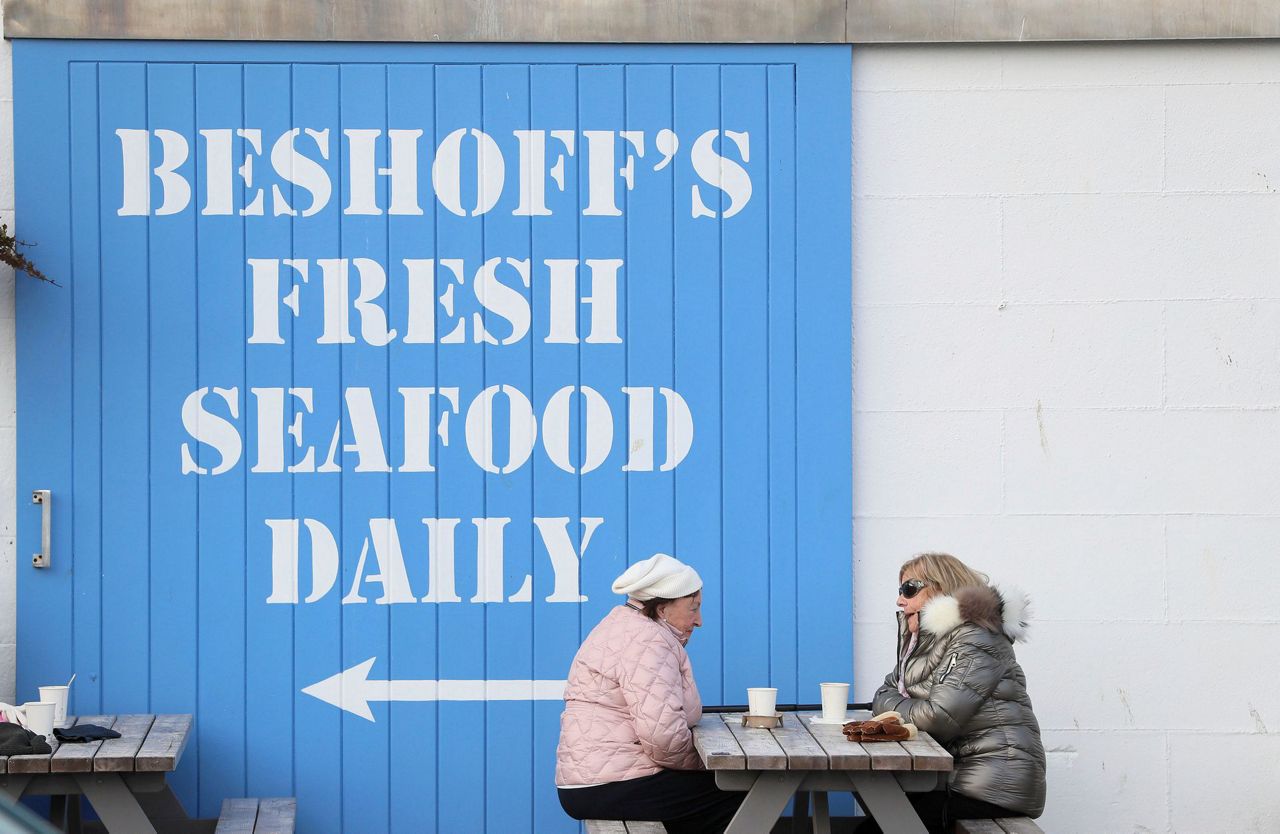 6 of 6
People sit outside Beshoffs, in the fishing village of Howth, Dublin, Ireland, Thursday, Dec. 17, 2020. Irish coastal communities will be "annihilated" if Britain's post-Brexit fishing demands are granted, an Oireachtas committee has been told. (Brian Lawless/PA via AP)

BRUSSELS (AP) — The U.K. and the European Union provided sober updates Thursday on the state of post-Brexit trade discussions, with only two weeks to go before a potentially chaotic split.

The two spoke early Thursday evening, their latest in a series of conversations in the past couple of weeks aimed at unclogging the talks which have moved at a snail’s pace ever since the U.K. left the EU on Jan. 31.

The U.K. still remains within the EU’s tariff-free single market and customs union until Dec. 31. A failure to reach a post-Brexit deal would likely lead to chaos on the borders at the start of 2021 as tariffs and other impediments to trade are enacted by both sides. The talks have got bogged down on three main issues — the EU’s access to U.K. fishing waters, the level playing field to ensure fair competition between businesses and the governance of any deal.

Following their latest conversation, von der Leyen warned that bridging big differences, in particular on fisheries, “will be very challenging.” Negotiations, she added, would continue on Friday.

According to a statement from Johnson’s office at 10. Downing Street, the prime minister stressed that “time was very short” and that it “now looked very likely that agreement would not be reached unless the EU position changed substantially.”

Johnson, like von der Leyen, focused on the lack of progress on fisheries. which has proved to be a hugely intractable issue in the talks — even though it accounts for only a very small amount of economic output.

On fisheries, the EU has repeatedly said it wants an agreement that guarantees a reciprocal access to markets and waters. EU fishermen are keen to keep working in British waters and the U.K. seafood industry is extremely dependent on exports to the 27-nation bloc. Johnson has made fisheries and U.K. control over its waters a key demand in the long saga of Britain’s departure from the EU.

According to Downing Street, Johnson stressed that the U.K. could “not accept a situation where it was the only sovereign country in the world not to be able to control access to its own waters for an extended period and to be faced with fisheries quotas which hugely disadvantaged its own industry.”

The EU’s position, according to Johnson, “was simply not reasonable and if there was to be an agreement it needed to shift significantly.”

Earlier, the European Parliament issued a three-day ultimatum to negotiators to strike a trade deal if it's to be in a position to ratify an agreement this year. European lawmakers said they will need to have the terms of any deal in front of them by late Sunday if they are to organize a special gathering before the end of the year.

If a deal comes later, it could only be ratified in 2021, as the parliament wouldn’t have enough time to debate the agreement before that.

“We give until Sunday to Boris Johnson to make a decision,” said Dacian Ciolos, president of the Renew Europe group in the European Parliament. “The uncertainty hanging over citizens and businesses as a result of U.K. choices becomes intolerable.”

A trade deal would ensure there are no tariffs and quotas on trade in goods between the two sides, but there would still be technical costs, partly associated with customs checks and non-tariff barriers on services.

Britain’s Parliament must also approve any Brexit deal and the Christmas break adds to the timing complications. Lawmakers are due to be on vacation from Friday until Jan. 5, but the government has said they can be called back on 48 hours’ notice to approve an agreement if one is struck.

Though both sides would suffer economically from a failure to secure a trade deal, most economists think the British economy would take a greater hit, at least in the near-term, as it is relatively more reliant on trade with the EU than vice versa.

Both sides have said they would try to mitigate the impact of a no-deal, but most experts think that whatever short-term measures are put in place, the disruptions to trade will be immense.

“The prime minister repeated that little time was left,” Downing Street said in its statement after the call. “He said that, if no agreement could be reached, the UK and the EU would part as friends, with the UK trading with the EU on Australian-style terms.”

Australia does not have a free trade deal with the EU.

Follow all AP stories about Brexit and British politics at https://apnews.com/Brexit