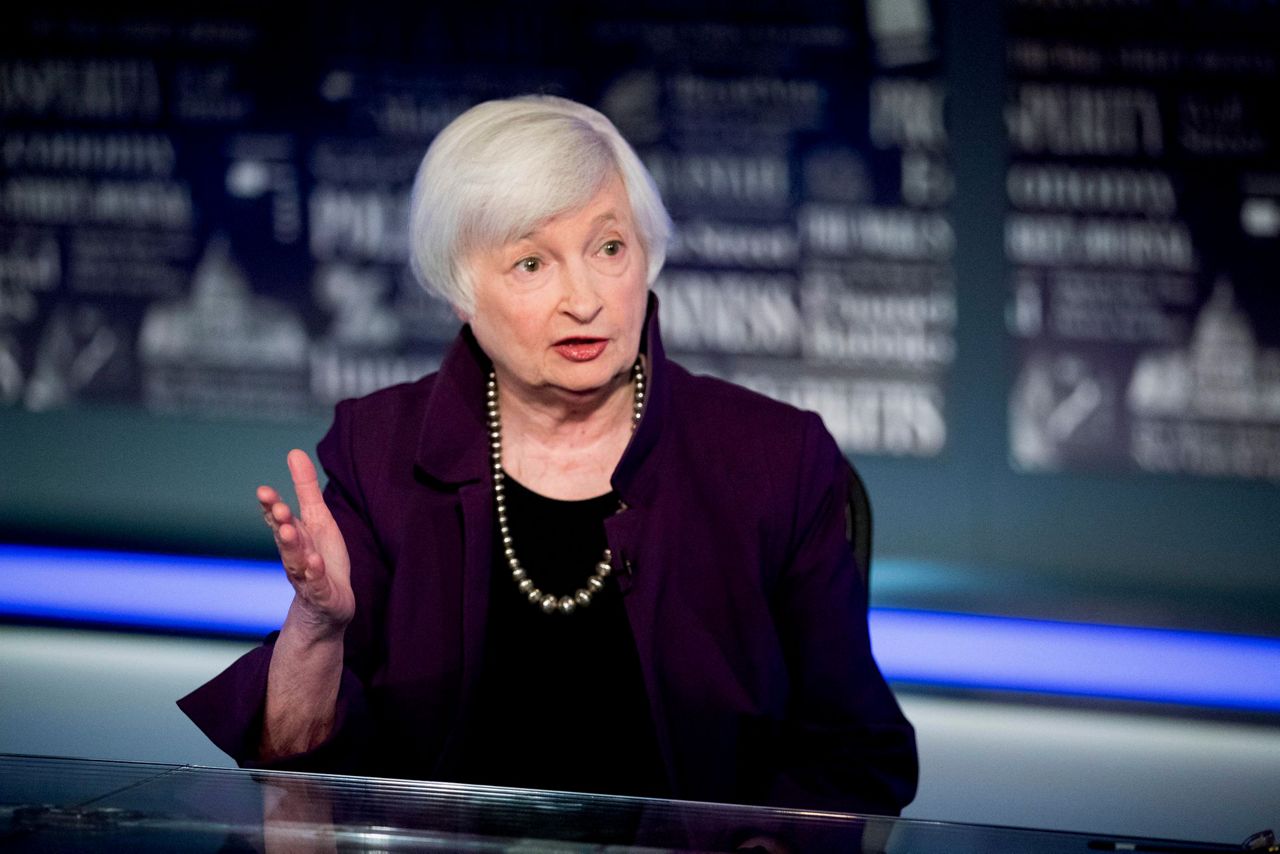 FILE - In this Aug. 14, 2019, file photo former Fed Chair Janet Yellen speaks with FOX Business Network guest anchor Jon Hilsenrath in the Fox Washington bureau in Washington. Treasury Secretary Yellen says recent signs of improvement in the economy are no reason to scale back the administration’s $1.9 trillion relief plan. She said in an interview Thursday, Feb. 18, 2021, that the economy remains in a “deep hole” with many people still hurting. (AP Photo/Andrew Harnik, File)

WASHINGTON (AP) — Treasury Secretary Janet Yellen said Thursday that recent signs of improvement in the U.S. economy are no reason to scale back the administration's $1.9 trillion relief plan because the economy remains in a “deep hole" with many people still hurting.

Yellen said in a CNBC interview that in addition to the relief plan's $1,400 stimulus checks and expanded unemployment benefits, the Biden administration is planning to unveil later this year an infrastructure program also aimed at boosting growth.

“We are digging out of a deep hole,” Yellen said. “Last year was the worst year for economic growth since World War II.”

Yellen rejected arguments being made by Republicans that President Joe Biden's proposal is too big following the nearly $4 trillion in government support approved last year.

She said that even with the support already approved, the country still has 9 million people out of work and another 4 million who have dropped out of the labor force. She noted that the Congressional Budget Office has projected that without the Biden plan, it could take the economy until 2024 to get back to full employment. With the extra support, that goal could be achieved by next year, she said.

“The costs of doing too little is much higher than the price of doing something big," Yellen said. “I really think the benefits will far outweigh the costs in the long run.”

Yellen also dismissed concerns that the increased government spending and soaring budget deficits could trigger unwanted inflation. She said the Federal Reserve, which she headed from 2014 to 2018, had the tools to deal with inflation.

The greater threat is “scarring” that would leave people out of work for long periods, making it harder for them to get back into the labor market and taking a permanent toll on their lives, she said.

She said parts of the administration's infrastructure proposal would be paid for with tax increases on wealthy corporations and high-income individuals, something Republicans also object to. Asked how much this “Build Back Better” plan would cost, Yellen said the plan was still being developed and the administration did not have a cost estimate yet.