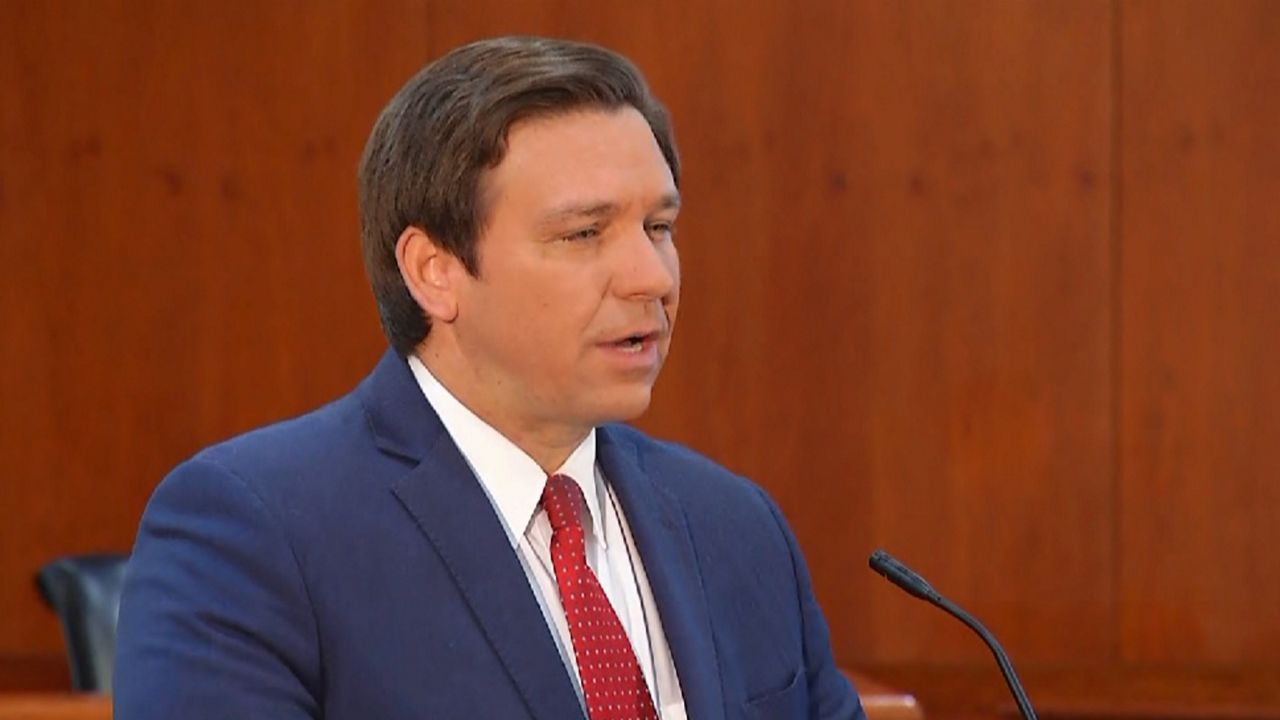 TALLAHASSEE, Fla. — Gov. Ron DeSantis says the first of two phases of a reopening of Florida's economy will begin Monday, with restaurants and stores being allowed to operate at 25% capacity.

Charter Communications has temporarily opened its live stream free to the public. You can watch Spectrum News via our live stream on your desktop or laptop without a subscription by visiting our website and clicking “Watch Live” in the upper right. Charter also is temporarily offering free broadband and wifi access for 60 days to teachers and families with K-12 or college students. To enroll, call 1-844-488-8395. The company also will open more than half a million wifi hotspots across the country.

DeSantis made the announcement during a news conference Wednesday from Tallahassee.

Florida has had about 33,000 cases of COVID-19, the illness caused by the virus sweeping the globe. More than 1,200 have died, according to statistics released by the state Department of Health on Tuesday.

The GOP governor said reopening hospitals and surgical centers to nonessential procedures would be part of the first phase of his plan -- but only if they agree to help nursing homes and assisted living facilities with COVID-19 outbreaks.

DeSantis formed a state "Re-Open Task Force" with representatives from key Florida industries. That task force said restaurants could open at 50% capacity, but the governor appears to be taking a more conservative approach to reopening than neighboring Georgia. He said earlier this week that Florida would take "baby steps" in resuming business.

While the industry leaders in the group called for reopening the economy as quickly as practical, DeSantis wants a regionally phased approach, where counties that have not been hit as hard by the coronavirus would open their businesses first. Hot-spot areas such as South Florida would remain closed initially.

25% capacity rules for restaurants and stores.

During the first phase of reopening the economy, DeSantis said those restaurants and stores that choose to reopen will have to adhere to specific social distancing guidelines of 6 feet outdoors and 20% to 25% capacity indoors.

Gyms and personal services such as barbershops are still being evaluated, the governor said, so those aren't being opened up yet. Bars and nightclubs also are remaining closed, though DeSantis is allowing sporting events in the first phase if they don't have spectators.

DeSantis hasn't set a date for the second phase of the state's reopening, saying he wants to see how the first phase goes.

Also, when the statewide stay-at-home order expires, it is possible DeSantis could work with cities and counties to reinstate the restrictions if case counts remain high or increase. Health experts have warned that reopening states or areas too soon could cause a second round of the coronavirus.

Here's a look at how key sectors of the economy could be impacted by the reopen plan.

DeSantis said Wednesday that he would like testing to be expanded beyond what has already been done, including possibly adding more walk-up testing sites, with each site statewide conducting at least 750 tests a day. He'd like more testing sites in the state's northwest counties. His aim is to have mobile labs that can provide results within an hour that can be positioned near facilities with vulnerable populations.

At a drive-thru coronavirus testing site at Orlando's Orange County Convention Center, the demand for testing has slowly declined. After opening to long lines a little more than a month ago, the site tested a little more than 300 Tuesday and about 260 by 3 p.m. Wednesday. The site has administered more than 11,000 tests. But as other sites have opened around the county, the number of tests each day has dropped. The convention center site has even removed testing criteria -- there's no appointment needed, and testing is free.

Wednesday was the first day of testing at a site in Orange County's Lake Nona community run by the UCF College of Medicine with Aventus Health and Tavistock. This is the group's second coronavirus testing site, which saw few cars early Wednesday. The site is taking symptomatic patients with an appointment and a doctor’s prescription.

Dr. Marcia Katz, the associate dean for clinical affairs and chief medical officer of the UCF College of Medicine, told Spectrum News that testing around the state of Florida could and should expand.

“In reality, we should be testing every citizen of Florida. That is the ultimate goal,” Katz said.

She said that will likely bring an increase of new cases coming from asymptomatic carriers of the virus.

Reopening the state will depend on strong testing that can identify all potential cases, Katz said.

“There’s a percentage of patients, almost 20%, that may be asymptomatic, so they don’t even know they’ve acquired the disease. So our ability to isolate, quarantine, and inhibit the transmission of the disease is dependent on how many people have it and knowing that they have it,” she said.

DeSantis recently announced plans to allow pharmacists be among those administering tests for COVID-19 in an effort to reach more people.

“But with the testing, I haven’t received any information. I have reached out to sort of industry representatives and I was told that they were working on acquiring tests that I could then obtain from them. But there was no specific timeline on that,” said Dr. James Wright of Five Points Pharmacy and Wellness.

Wright said they need clear information on where those tests will come from, where they send them to, and how patients can get results. But he agrees there’s a need for more testing and with a broader reach that can help more Floridians.

“So, the testing is really key to making everything else run a little bit smoother,” Wright said.

DeSantis's says his plan to reopen Florida's economy will balance public health and the health of the economy -- a plan Jeremy Reynolds has been waiting to hear for weeks.

"Finally this morning, when I got back into the system, it showed my application was under review," he said.

Reynolds, like so many others, has been anxiously waiting to see how DeSantis’ plan will impact him.

Dr. Mark Johnston of Rollins College's Crummer Graduate School of Business, says it could be some time before we have a sense of how well the plan is working.

"We need to see how well the plan works. I think you’re probably looking at least three to six months before we get back to anything that is even close to normal business activity," Johnston said.

He said public safety restrictions could put a strain on businesses’ bottom lines.

"Even once things officially open, they will open in such a way that the business will still be dramatically impacted by low numbers," Johnston said.

But what could be even more devastating would be reopening the state too quickly, triggering a second pandemic, he said.

Johnston said it will likely be next year before Florida’s economy rebounds to where it was before the pandemic -- and that’s only if no other major outbreaks occur.

"If there is a second relapse, and we can point to the fact, people will be even more concerned and what we’re used to doing," Johnston said.

Despite not knowing when he'll be able to go back to work, Reynolds remains cautiously optimistic.

"I think this is going to be the new normal for a long time, and we are going to have to adapt to it," he said.

Industry leaders in Orange County have been meeting this week to discuss ways to reopen the theme parks in Central Florida.

A working group within the Orange County Economic Recovery Task Force met Wednesday morning to discuss possible guidelines and other ideas for the theme parks. One idea that was mentioned involved an approach that would allow the theme parks to reopen "at their own discretion." Using recommendations from health officials and other guidelines, the theme parks could determine their own reopening timeline.

The ideas discussed in the meeting are preliminary and are being revised throughout the week.

Disney World, Universal Orlando and SeaWorld have been closed since mid-March due to the pandemic.

The theme parks have not announced when they will reopen.