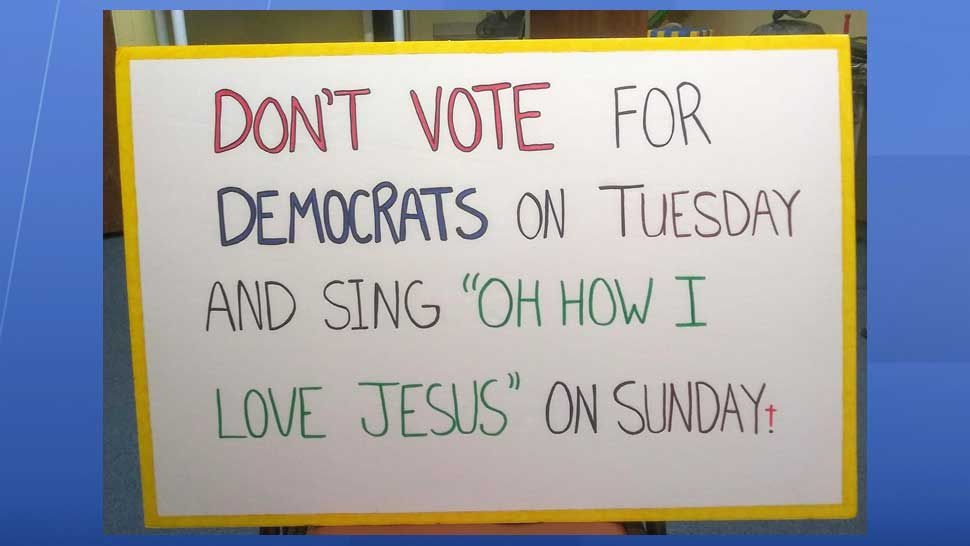 The pastor of Grace of God Church in New Port Richey posted this sign outside the church, which was a polling place, on Election Day. According to the county supervisor of elections, the sign prompted hundreds of complaint calls.

NEW PORT RICHEY, Fla. — Pasco County Supervisor of Elections Brian Corley said he revoked the polling place status of Grace of God Church in New Port Richey after its pastor placed a controversial sign in front of the building on Election Day.

“I’m frustrated and, quite frankly, a little resentful because, as I explained to the pastor, any other day, any other day you could put that sign up," Corley told us. "You could put 100 up. But when you use it as a polling place, that’s just not the way you operate."

The sign read, “Don’t vote for Democrats on Tuesday and sing, ‘Oh, how I love Jesus’ on Sunday.”

“I get all these political ads up and down my driveway,” Pastor Al Carlisle said of election season. “I said, ‘Well, I don’t know if God’s really excited about all this,’ and ‘How can I use this opportunity to be a witness, to share the truth of God’s word?’”

Corley said at first, his office was under the impression the sign was placed by an individual – something not uncommon during an election. He reached out to Carlisle.

“He told me, ‘Well, I put it up.’ You literally could’ve blown me over with a feather at that point,” Corley said.

No law against it

According to Corley, there’s no law against the proprietor of a polling place displaying that kind of sign.

“It’s horribly inappropriate and tacky and unprofessional,” he said.

The sign was more than 100 feet from the entrance of the polling place and on private property, so Corley said election workers couldn’t remove it. When he asked Carlisle to take it down, the pastor refused.

“Just because I pastor a church doesn’t mean I give up my right as a citizen to have an opinion, to have freedoms," Carlisle said. "I can enjoy the First Amendment freedoms just like anybody else."

“We’re not talking a handful of calls – we’re talking in the hundreds, several hundred, in addition to all social media contacts,” said Corley.