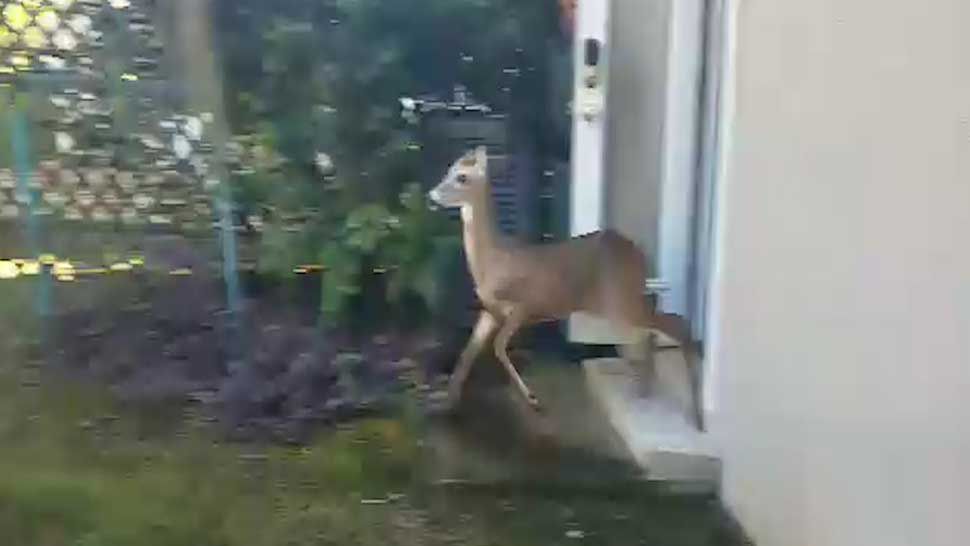 This image taken from video shot by Thomas Lessing shows the reindeer making a break for it Tuesday afternoon. (Courtesy of Thomas Lessing)

LAND O'LAKES, Fla. — One of Santa’s reindeer may have left the North Pole a bit early this year.

A Land ‘O Lakes man came home Tuesday to find a deer had broken into his home.

Upon his return from a business trip, Thomas Lessing found his front door smashed in. He thought someone had broken in.

“As I was going through the house, I’m noticing valuables haven’t been taken," Lessing explained. "I was thinking, 'what kind of robbery is this?'”

He called Pasco County deputies, who while looking around the house noticed someone - or something - was in the bathroom.

“We look underneath the door and I could see something moving,” Lessing said. “The deputy slowly went to turn the door, and then a deer pops its head out.”

Thankfully that bathroom has a door to the outside that they were able to unlock and get the deer out. They captured video of the deer escaping.

“The last thing you think of is that a deer is trapped in your house,” Lessing said.

The front door is now covered with woof after the deer's unexpected visit.  But it’s what is behind that door that had the homeowner really concerned.

That’s where Lessing’s prized Christmas village collection is. The deer did damage some of it.

Lessing says some of the collectibles are irreplaceable, but he’s grateful that this wasn’t what he first thought it was.

“I was relieved somebody didn’t break into the house, but at the same time, I was shocked that one of Santa’s reindeer decided to come hang out at the house at Christmas time.”

Animal Control also came to the scene and say the deer was not hurt. Thomas’ two dogs are also OK.