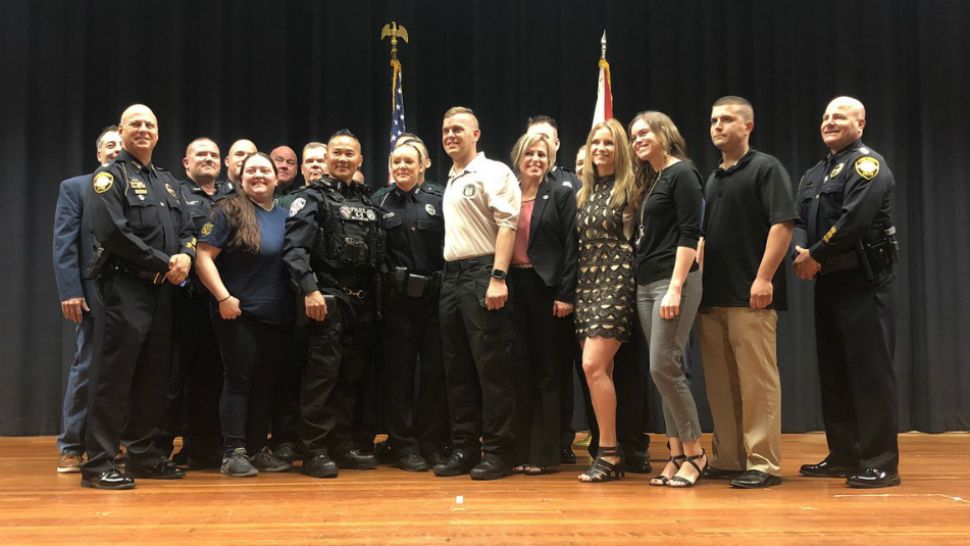 “I’m pretty sure everybody told me, ‘No,’” Kondek said of the initial reaction from family and friends. “They told me no at first, and then once they realized this is really what I want to do, they accepted it. They backed me 100 percent.”

That support was obvious as a large group of family, friends, and law enforcement members representing about 11 different agencies stood and applauded as Kondek accepted his certificate.

Kondek said his father initially encouraged him to consider law enforcement as a career about five years ago.

“My dad sat down with me, helped me sign up for the Sheriff’s Office to go to the civilian unit, just so I can help people and see if this is my thing,” said Kondek, referring to the Pasco County Sheriff’s Office.

Nothing came of signing up for the unit, and months later, in December 2014, Charles Kondek was fatally shot in the line of duty.

Loved ones came around and were out in full force to support Kondek at Wednesday’s graduation. “This is where he’s meant to be,” said mom Teresa Kondek. @BN9 pic.twitter.com/OrFmMxTmcC

Rather than deter him from a career in law enforcement, Kondek said what happened in the aftermath of his father’s death helped push him toward the job the elder Kondek loved.

“Seeing everyone come together – different agencies from all over Florida – I mean, they had no idea who we were, and they came together as a family without even asking,” Kondek said.

Before signing up for the academy, Kondek worked at Safelite Auto Glass. He began training with Class #107 in August.

“I’m so proud of him. I’m so proud of every single one of those cadets today because to step out and to sign up for this and stand up – that’s a pretty rough job,” said Teresa Kondek.

Following the ceremony, Teresa Kondek presented her son with a special graduation present: his father’s handcuffs. They were engraved with his End of Watch date and a message: “Andy, Pray and be safe, Love you – Dad.”

“It’s going to be tough. I will worry,” said Teresa Kondek. “It takes an extremely brave person to step up after the loss that we’ve had, so I’m so proud of him. He’s so brave.”