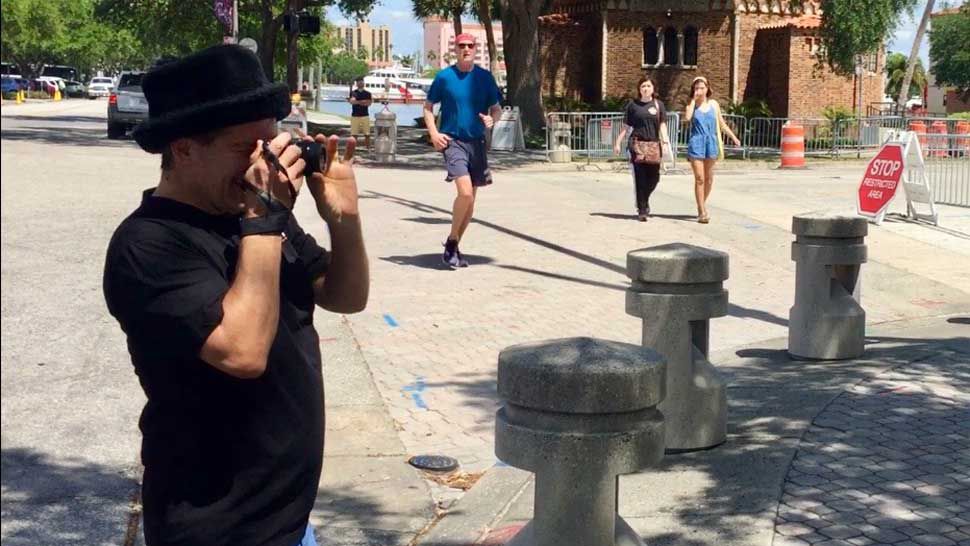 ST. PETERSBURG, Fla. — An artist who has taken photos of nude models at public landmarks across the country for the past 25 years said the new pier expected to open by the end of this year brought him back to St. Petersburg.

“I have a date with the new pier,” said photographer Harvey Drouillard, 54. “This new pier will be a new era.”

Drouillard said he has been visiting St. Petersburg since 2014 and has shot 150 locations across the city for his “Harvey Photos” collection. His favorite photo and hottest seller features three nude women walking towards the old inverted pyramid shortly before it was demolished.

“Everybody misses the pier and they want to have a piece of it,” said Patrice Weaver, co-owner of Now & Then Antiques. “They’re iconic photographs of St. Pete with a really good sense of humor and they’re popular.”

Weaver offers an oversized print of a Harvey Photo at her Central Avenue business that shows three nude women walking down the steps of City Hall for $4,000.

“There is a special offer for the Mayor. Harvey says he will sell it to him for half price,” she said. “His calendars are a huge seller because they’re more affordable.”

Harvey said he moved back to St. Pete about five months ago and has been busy adding new photos of city landmarks to his collection.

We followed Harvey on a recent shoot. The first stop was at Fresco’s Waterfront Bistro, a location the artist picked because of the new pier construction.

“It’s got a time stamp on it right now,” he said. “Because right next to it, where the pier’s going to be built, there’s a great banner covering the fence that has all the new businesses that are going to go there.”

On this day, Harvey had one female model volunteer and three males, which was a welcome surprise for the artist.

“That’s one of the biggest complaints, not enough men,” he said. “I can’t control that because it’s all volunteers.”

Harvey goes over the rules with the models beforehand. They also practice taking their clothes off and on until they get it down to 10 seconds.

“The very first thing I say to the people, 'remember all day about the decency of this, because this isn’t a prank,'” he said. “We’re making high art today. We’re making history.”

Shannon Monaghan, 28, said she models for Harvey to support a fellow artist and likes the message that come across in his photos.

“Harvey is a truly amazing artist. He’s been making a living off of his art for many of years,” she said. “Nudity is not a sexual thing and human bodies can be much more normalized in society’s eyes and his artwork really helps push the buttons, which I appreciate.”

Paying homage to the city

Monaghan and the other male models also posed nude in front of Red Mesa and Kraft Café in downtown St. Pete. Harvey moves quickly and the models are only nude in public for about 30 seconds.

People who got a glimpse said it caught them off guard.

“She’s like completely naked,” said Tyler Rechnitz. “It was kind of a shock.”

“I thought it was funny and very typical of St. Pete,” said Fallon Rechnitz. “It’s art. There you go. I wasn’t offended. It was awesome.”

“I don’t think it was offensive, necessarily,” said Alexia Perry.

St. Petersburg Police spokeswoman Yolanda Fernandez said the kind of photos that Harvey is taking does not fall under the state statute of indecent exposure.

“There’s no vulgar intent. It’s not lascivious, it’s not lewd,” she said. “He could face a city ordinance and that would be a fine of about $93 for being nude in public.”

Fernandez said an officer would only ticket Harvey if he was being reckless and children were present.

“The officer would have to see it and in most cases by the time the officer arrives, they’re gone,” she said. “He’s pretty savvy about how to get his pictures done.”

Harvey said he’s not looking to cause trouble in St. Petersburg. Instead, his intentions are to pay homage to a city that welcomes artists.

“I love St. Petersburg. I think it loves me,” he said. “It’s not about the nude, it’s about the landmark. The nude is to make you smile.”

Harvey’s art is also available for purchase at BBD Lifestyle in St. Petersburg. The next two cities on Harvey’s list to shoot are Philadelphia and Boston.