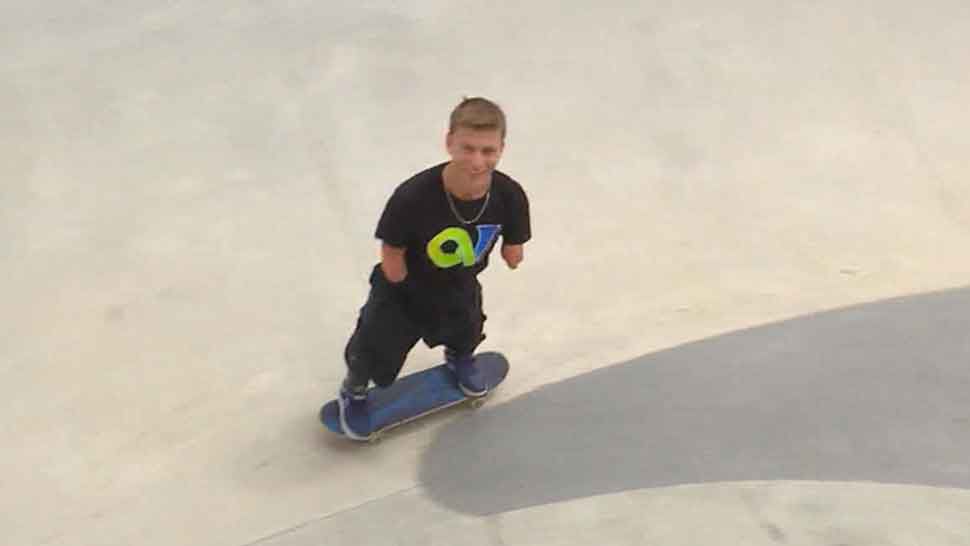 Justin Beauchesne will be at this year's X-Games in a few weeks as the event brings back its adaptive skateboarding competition. (Adria Iraheta/Spectrum Bay News 9)

ST. PETERSBURG, Fla. — Justin Beauchesne is, in a word, unstoppable.

“It’s about time people see what mind over matter really is,” he said.

Beauchesne had both arms and his foot amputated at just 18 months old following complications from a rare infection called meningococcemia.

“From there, I just wanted to make sure I was living my fullest life,” he said.

One thing he did to fulfill that goal was teaching himself how to skateboard.

“I started teaching myself how to do tricks, which is one of my favorite things about skateboarding because you’re able to be independent and able to be yourself,” he said.

His efforts led to partnerships with several skateboarding companies and appearances at the X-Games. He did it all with one goal.

“Just kind of teach other amputees how to skateboard and how to live a better life,” he said.

Since then, he's become a patient advocate for new amputees. He also spearheads Amp-Ventures, a nonprofit empowering amputees across Florida.

“I’m so ecstatic for the world to see what we’re capable of doing as amputees,” he said.

Beauchesne will be at the X-Games in a few weeks as they bring back the adaptive skateboarding competition.

It's a big moment for skateboarding. Not only is the adaptive skating category returning to the X-Games, but the sport will make its debut at the 2020 Olympics.

Beauchesne hopes this will allow even more opportunities for adaptive skaters.

“We want this sport to grow for the next generation of adaptive athletes, because we want others to realize mind over matter,” he said.