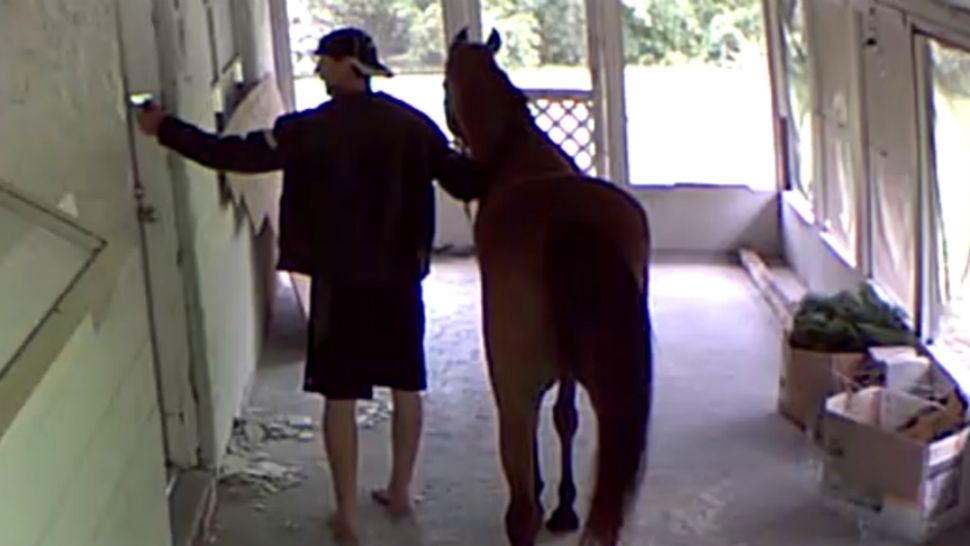 Surveillance video shows that Lonnie Maddox had a horse at his side during the break-in of a Pasco County home. (Pasco County Sheriff's Office)

No Horsing Around: Florida Man Blames Animal For Home Break-In

PASCO COUNTY, Fla. — A 52-year-old Florida man is facing burglary charges after being accused of breaking into a Pasco County home with a horse at his side.

"Maybe a bicycle or a truck, but a horse? Very surprised," homeowner Steve Ferguson said.

Ferguson said he bought the Moon Lake-area home a year ago as an investment property. He plans to remodel and rent it.

Ferguson said the Shalimar Street home has been burglarized before, so he put up a fence, posted "no trespassing" signs, and installed security cameras.

He called the Pasco County Sheriff's Office on Thursday after he started getting alerts on his phone that showed video of a man on his property.

He then headed to the house himself.

"Upon arrival, I saw the horse running up the street," Ferguson said.

. @PascoSheriff arrested Lonnie Maddox, 52, for burglary. He allegedly broke into vacant home in #MoonLake area. This is surveillance from property. Owner says Maddox blamed the horse for breaking in, but other video shows him trying to open front door. @BN9 @MyNews13 #bn9Pasco pic.twitter.com/Z4uWLfVjXZ

By that time, deputies had made contact with Lonnie Maddox of Spring Hill.

According to an arrest report, he actually approached the deputy responding to the burglary call and asked if he'd seen a horse. Maddox reportedly told the deputy that the horse had gotten into the yard through a broken fence, and he followed it. The document states he also told deputies he went into the house because he was interested in renting it and wanted to see what it looked like inside.

"I said, 'What were you doing in my house?'" Ferguson said of his encounter with Maddox at the property. "The guy said, 'My horse broke into your house, mister, and I had to go in and get her.' I said, 'OK, so she broke into the gate and then the porch and then the house?'"

Surveillance video shows a man identified as Maddox walking around the property with the horse, entering a screened-in porch with the animal, and seemingly trying to get in through the front door. The affidavit says the door was padlocked and that Maddox got into the house by breaking a back window.

Ferguson said nothing was taken but estimated the damage to the window will cost $100 to repair.

As for the horse, a Sheriff's Office spokesperson said Maddox borrowed it. The animal was found a short distance from Shalimar Street and returned to its owners.

Maddox faces charges of burglary of a dwelling.