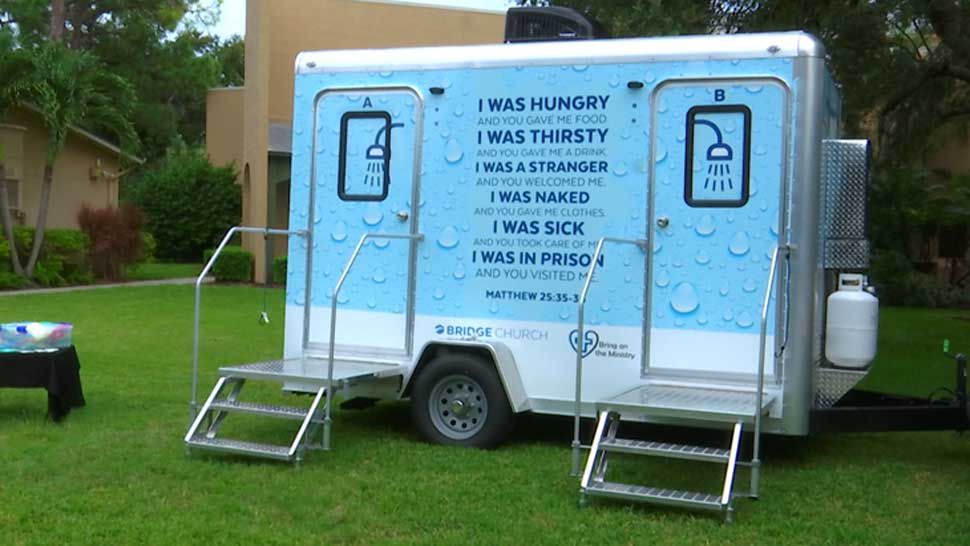 The mobile shower system is state-of-the-art and the first of its kind in Manatee County, equipped with a tankless water heater and an A/C unit. (Gabrielle Arzola/Spectrum Bay News 9)

BRADENTON, Fla. — Faith-based organizations in Bradenton have partnered to make something most people take for granted — a hot shower — more accessible to the area's homeless population.

“We are hoping it gives them a sense of hope and direction, and just a good start,” says organizer Steven Harris.

Harris and his wife, Melinda, are part of the "Bring It On Ministry," an organization focused on faith-based outreach programs for the homeless.

For this effort, essentially bringing showers on wheels to the homeless, they've partnered with the Bridge Church in Bradenton.

“Our vision for showers is that it gives people an opportunity to feel good, find joy and find purpose,” says Melinda.

“A lot of the homeless don’t have access to things like a shower, and this is a game changer,” says Bridge Church Pastor Mark Alt.

The state-of-the-art shower is the first of its kind in the area, equipped with an A/C unit and a tankless water heater.

The system is set to roll out in October.