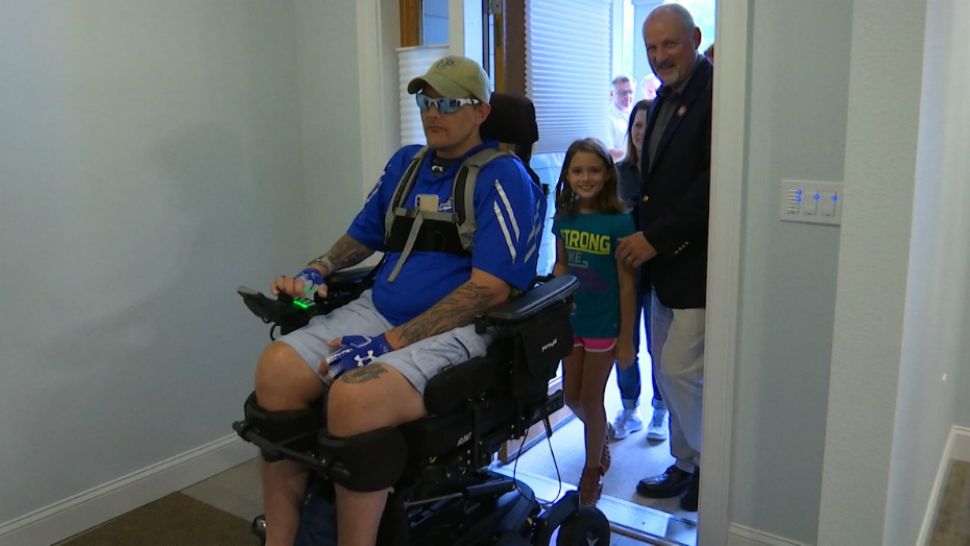 Army Sgt. First Class Anthony Kenworthy was seriously hurt when his truck was hit by an IED overseas in 2014. It left him a quadriplegic. (Tim Wronka/Spectrum Bay News 9)

LAND O' LAKES, Fla. — A veteran who was seriously injured gets another chance to live his life.

It's specially designed for his needs as a quadriplegic.

Coming through his new front door for the first time, Kenworthy had every emotion you could think of.

Here he is seeing his home for the first time. He explains all of the emotions he felt has gets to start his new life. @bn9 pic.twitter.com/SmGNncpDoT

He finally has a place for him and his family to live comfortably.

Kenworthy was seriously hurt when his truck was hit by an IED overseas in 2014. It left him a quadriplegic.

The Stephen Siller Tunnel to Towers Foundation heard about his story and led efforts to build him a new smart home in Land O' Lakes.

The house is  designed for his needs which will be a huge to help him and his family, including specially made kitchens, bathrooms, bedrooms and more.

"I got hurt serving my country. And the country came together to take care of me for it," Kenworthy said.

Tunnels to Towers honors the sacrifice of firefighter Stephen Siller on 9/11. The foundation has now built 85 smart homes for seriously injured veterans.​