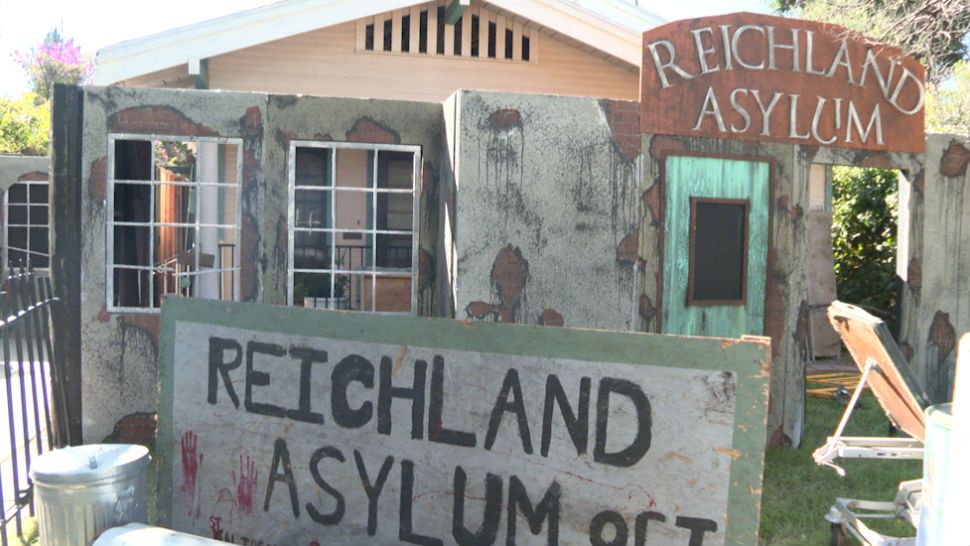 RIVERSIDE, Calif. – This is the last place most people would want to go trick or treating is at Reichland Asylum in Riverside. It is one of the most popular haunted houses in Southern California.

“Every year we spend thousands of dollars to put this on. From storage rentals to truck rentals to building new rooms, props, costumes, make-up - it’s a lot of money but we love doing it,” says Joshua Roa St. Pierre.

St. Pierre is the mastermind behind Reichland. He built his first haunted house in his teens and opened the Asylum 13 years ago. His love of Halloween has motivated him to make his haunted house bigger and scarier every year.

“Before I had even been to a haunted house as a kid, I knew I wanted to build one and scare people and then when I went to my first haunted house, I was just mind-blown and I knew that was something I wanted to do for the rest of my life,” says St. Pierre.

It takes him and his girlfriend Sarah Whitley months to build. Every nook and cranny of the 5,000-square-foot set has a place in a detailed narrative that more than 5,000 visitors walk through every year.

St. Pierre got the name Reichland from a jury duty case he was assigned to - a deranged doctor, dark woods, and the lone house that resides in them are all reminiscent of a Hollywood Halloween thriller brought to life - there’s an art to haunting.

“You can build a room, you can paint the walls, you can fill it with props. But unless you really have a good scare, a really good flow, the design really comes together in that sense. Functionality really meets set design in my opinion,” says St. Pierre.

Their fright wouldn’t be complete without the actors that do the scaring. Whitley does all the make-up that brings the dead to life.

“I don’t really do beauty anymore. I just do the ugly stuff,” says Whitley.

While scaring people is no doubt their main goal, their detailed work is really about the fun of keeping the spirit of Halloween alive.

“We want you to walk in and say, ‘Wow, they built a house, they built a hospital and they did all this in their backyard.’ That’s our goal to entertain people, and if we can’t scare you which is our number one priority, we’ll definitely make sure we entertain you in some way,” says St. Pierre.

The Asylum is open October 30 and October 31. It is free to enter, but they accept donations on their Instagram.