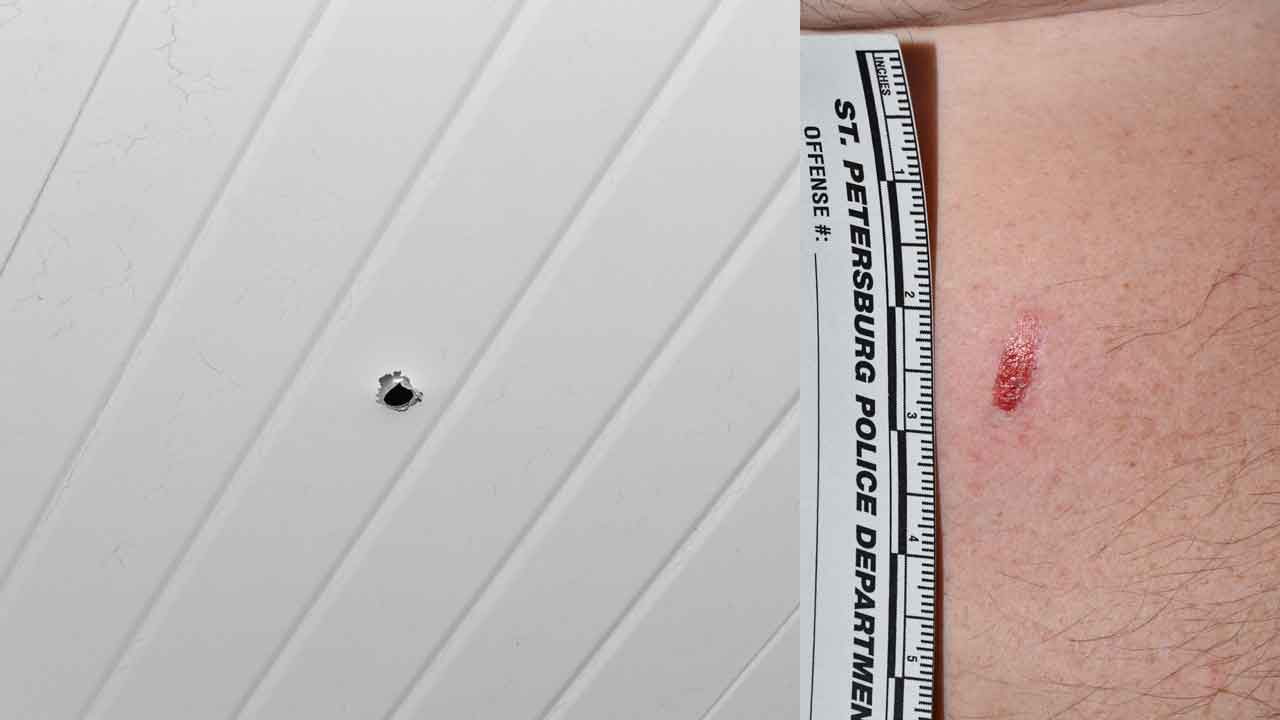 Left: Bullet hole in the ceiling of The Big Catch restaurant in St. Petersburg; Right: Mark left on the chest of Michael Donahue, 50, by the bullet. (Courtesy: St. Petersburg Police)

ST PETERSBURG, Fla. — A patron who was eating dinner at The Big Catch restaurant in St. Petersburg on New Year’s Day was struck by a bullet that fell from the sky, pierced the ceiling, ricocheted and struck the victim in the chest, according to St. Petersburg Police.

“All of a sudden we heard a loud pop and just that quick I felt something hot on my chest,” said Mike Donahue, 59. “Then put my hand down and there’s a bullet still hot in my hand. I laid it down on the table.” That incident happened at 8:28 p.m. on New Year’s Day at the restaurant located at 1500 2nd St. S., according to a police report. Speaking exclusively with us, Donahue said he has no doubt that he was the victim of celebratory gunfire.

“Absolutely, celebratory gunfire. It came down at an angle almost vertical,” he said. “It went through the roof… it hit the floor about two or three feet away from me and then must’ve ricocheted off a post and then hit me.”

Donahue said the celebratory gunfire was nearly deadly and upset a waitress.

“Really, I felt bad for our waitress because she was standing only like two feet away when it came through. So, she was in shock as well,” he said. “If it would’ve came right through the roof and hit somebody it would’ve killed them easily. I mean, there was a big divot in the concrete.”

The hot bullet left a one-inch mark on Donahue’s chest similar to a cigarette burn, along with bruising. Donahue refused medical treatment. When we initially contacted a manager at The Big Catch about the incident, he told us that no patrons were struck and rumors were flying. After obtaining the police report through a public record’s request that showed otherwise, we went back to The Big Catch for a response and were asked to leave the property.

The Big Catch incident was the second case of celebratory gunfire on the south side of St. Petersburg over the New Year’s holiday. We broke the story about retired police officer Les Harris who found a hole in his back patio and a bullet on the ground at his home.

“It depends, it goes in cycles,” she said. “Some years we don’t have any and then we had a couple of cases this year.”

Donahue said he believes celebratory gunfire is a big problem and a new law should be passed that makes it a felony.

“Being more severe is going to bring the attention to people,” he said. “If it’s a felony, people are not going to be shooting their gun in the air.”

Fernandez said because there’s no celebratory gunfire law, these incidents don’t get classified that way. For example, the retired police officer’s incident was called criminal mischief and The Big Catch incident was labeled police information.

The only reason these two cases have come to light is because the public contacted Spectrum Bay News 9.