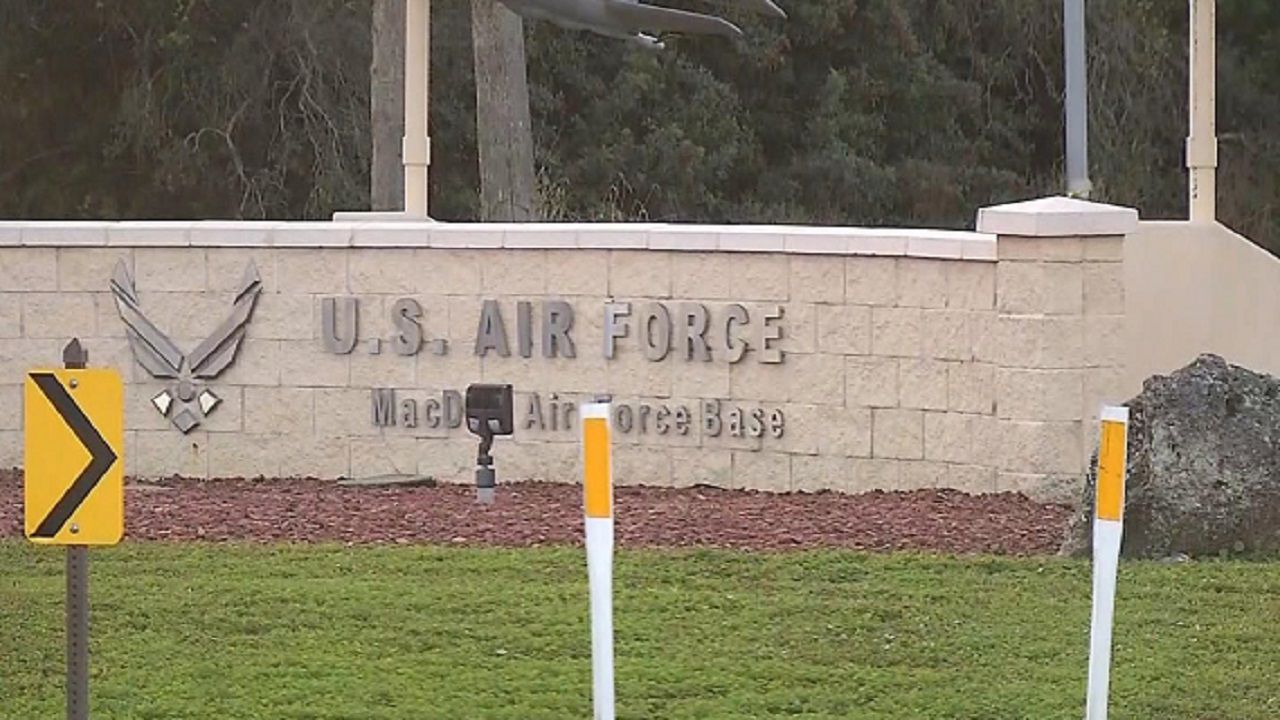 TAMPA, Fla. — MacDill Air Force Base was placed on a brief lockdown Friday morning due to reports of a potentially armed suspect near the Tanker Way gate area on the base, according to MacDill officials.

The base was notified by St. Pete police after a domestic incident occurred at an apartment complex, according to St. Pete Police PIO Yolanda Fernandez.

The police department said in a release that they received a call around 2 a.m. about a 54-year-old man, Joseph Ruberto, with a gun who vandalized a vehicle at Peridot Palms Apartments, located at 10601 Gandy Blvd. N. Ruberto also damaged the door to the apartment of his ex-girlfriend and her new boyfriend.

Ruberto had fled the scene before officers arrived. He was taken taken into custody by the Hernando County Sheriff's Office.

VIDEO: A message from MacDill Air Force Base Commander Colonel Stephen Snelson on today's lockdown at the base. Latest info: https://t.co/62EnxOL9CR pic.twitter.com/7vT221cbC1

Fernandez said police had reason to believe Ruberto may have been heading near the base but did not say why. Police also said the suspect may have fired a gun at the apartment complex, but that is still being investigated.

The base was placed on lockdown out of precaution. Fernandez also said the St. Pete SWAT Team was doing a training drill at MacDill Friday morning, which may have made the situation appear to be more severe than it actually was.

Just after 7 a.m., an alert was issued saying the base was on lockdown due to an "active shooter situation" near the entrance to the control tower.

By 8 a.m., authorities had confirmed there was no active shooter and the lockdown was lifted, with the exception of the Tanker Way gate, which remains closed until further notice. All of the gates were reopened just after 9 a.m.

*LOCKDOWN HAS BEEN LIFTED*
Please reference our Facebook page for updates - we will continue to update information as soon as possible. https://t.co/6oCsUUsWtK pic.twitter.com/DNf6jNJFq0

There were no shots fired on MacDill, and no injuries to MacDill employees.

Despite some reports, there is no active shooter on MacDill. If you have any questions, please call @TampaPD or @MacDill_AFB. #teamhcso #SheriffChadChronister

According to Fernandez, the public was never in any danger.

Charges against Ruberto are pending.

UPDATE// ⁦@HCSOSheriff⁩ confirms there is no active shooter on MacDill Air Force Base. The base appears to be open, but emergency vehicles are still making their way in. Lockdown alert first came through at 7:13 a.m. ⁦@BN9⁩ pic.twitter.com/orQpi4GOMJ

MacDill AFB is home to the HQ for US Central Command (USCENTCOM) and US Special Operations Command.

Here is the original alert issued: